Maine faith leaders sign letter calling on Sen. Susan Collins to back For the People Act 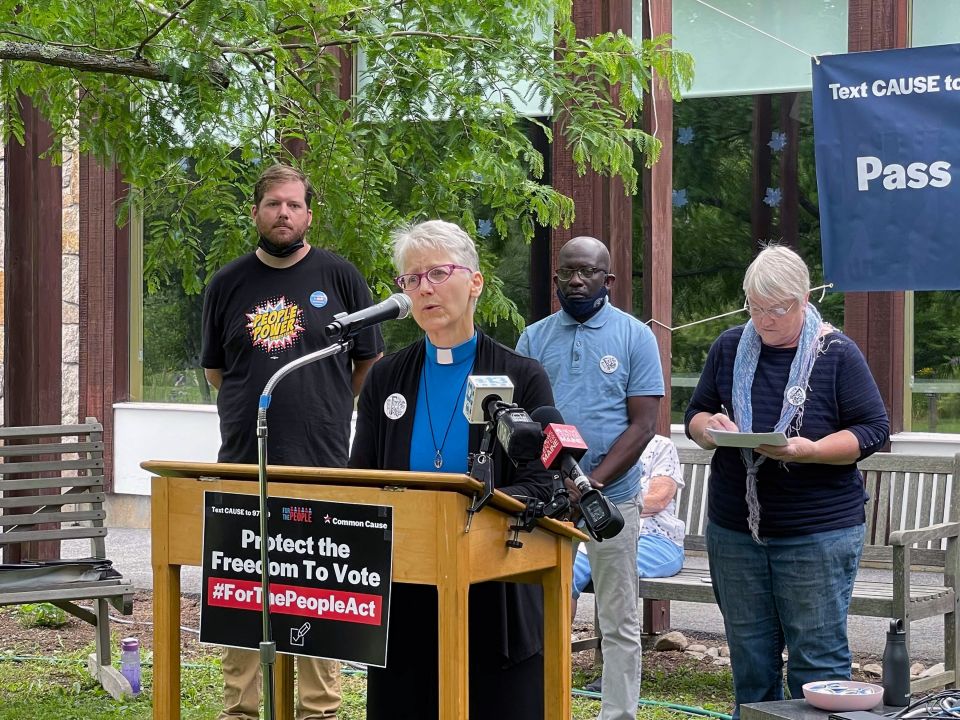 Portland, Maine — More than 125 religious leaders and people of faith in Maine have signed a letter calling on lawmakers to support the For the People Act, adding to substantial religious pressure on elected officials to pass the sweeping federal voting rights bill.

In a news conference unveiling the letter at Portland’s Allen Avenue Unitarian Universalist Church on August 10, a trio of faith leaders championed various provisions of the For the People Act, which would overhaul federal election law in ways advocates say will help vulnerable Americans vote.

“Working for this legislation is a faithful response to the belief that all people have inherent worth and dignity,” said the Rev. Donna Dolham, minister at Allen Avenue.

Dolham and other speakers directed their remarks toward Sen. Angus King, an independent who typically caucuses with Democrats, as well as Sen. Susan Collins, a Republican who sometimes operates as a rare swing vote in an evenly divided Senate.

Speakers echoed faith leaders in Georgia, Texas and elsewhere who have expressed outrage at efforts by state-level lawmakers to pass legislation the faith leaders say would restrict voting rights — laws that would likely be challenged by the For the People Act.

“This is the nexus of public policy and faith for me: Members of Congress take an oath under God to protect and defend the Constitution. That also includes protecting the rights guaranteed to individuals under the Constitution,” said Marge Kilkelly, a former King staffer and state lawmaker who also serves on the board of directors of the Maine Council of Churches as a lay Episcopalian.

"Those rights are being stolen by state legislatures to benefit themselves. 'Thou shall not steal' is one of the Ten Commandments in both Hebrew and Christian traditions.”

Pious Ali, a Portland City Council member who also spoke at the news conference, invoked an Islamic prohibition against oppression when explaining his support for the For the People Act.

"It is not just ‘do not oppress others,' it’s ‘do not stand by while others are being oppressed’ — you have to intervene,” Ali, the first African-born Muslim American elected to public office in Maine, told Religion News Service in an interview.

"Not being allowed to participate in the central cornerstone of the democratic system … is oppression.”

In their letter to lawmakers — which organizers said was partly facilitated by the Washington, D.C.-based Catholic social justice lobby Network — Maine faith leaders explained their support for the bill by declaring: “Our faith calls us to support the most vulnerable, nurture human potential, root out systemic racism, and advance justice in our society.”

The letter then concludes: “Collectively, we need an inclusive, representative and responsive democracy to answer that call. As people of faith and as your constituents, we ask that you support the For the People Act.”

King co-sponsored the bill, but Collins joined other Republicans in blocking efforts to push the bill through the Senate, which passed the House in March. Collins voiced outright opposition to the bill in June, saying the For the People Act “is not legislation that could ever form the basis of a reasonable, bipartisan elections reform bill.” Republicans blocked debate over the bill later that day.

A spokesperson for Collins confirmed the senator opposes the bill. "It would prevent even the most basic voter ID laws, mandate that states allow ballot harvesting — a practice that has been outlawed in Maine — and force the federal government to subsidize the campaign of millionaire political candidates. These changes just don’t make sense," the spokesperson said in an email.

The Mainers’ message adds to a growing list of faith-led protests calling on lawmakers to protect voting rights in general and support the For the People Act in particular.

In July, the Poor People’s Campaign staged protests in Arizona and Texas that, among other things, called for passage of the For the People Act. The Texas protest was modeled after Martin Luther King Jr.’s 1965 march from Selma, Alabama, to Montgomery, with faith leaders marching 27 miles from Georgetown, Texas, to Austin to protest state-level legislation they argue would restrict voting rights.

The Poor People’s Campaign escalated its efforts a few days later in Washington, D.C.: In one of the largest mass-arrest protests at the U.S. Capitol in recent memory, more than 200 faith leaders and low-wage workers organized by the Poor People’s Campaign were detained by police while calling for lawmakers to pass an array of bills they argued would aid the poor — including the For the People Act.

The African Methodist Episcopal Church has also expressed support  for the bill, and clergy in Georgia threatened to boycott local businesses earlier this year unless CEOs came out against state elections laws seen as restrictive and backed federal voting rights legislation — including the For the People Act.

One of the bill’s most vocal champions is Sen. Raphael Warnock, the prominent pastor of Ebenezer Baptist Church in Atlanta who has suggested eliminating the filibuster in the Senate if Republicans don’t back it.