Mandatory celibacy at the heart of what's wrong 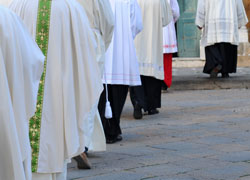 Like all Catholics, I gratefully depend on the faithful ministry of the many good priests who serve the church. Yet I offer a broad critique of something central to their lives and identities -- the rule of celibacy. Many priests will recognize the truth of what I describe. I write from inside the question, having lived as a celibate seminarian and priest for more than a decade when I was young. In the Bing Crosby glory days, celibacy was essential to the mystique that set priests apart from other clergy, the Roman collar an “Open sesame!” to respect and status. From a secular perspective, the celibate man or, in the case of nuns, woman made an impression simply by sexual unavailability. But from a religious perspective, the impact came from celibacy’s character as an all-or-nothing bet on the existence of God. The Catholic clergy lived in absolutism, which carried a magnetic pull.

The magnet is dead. Celibacy cuts to the heart of what is wrong in the church today. Despite denials from Rome, there will be no halting, much less recovering from, the mass destruction caused by the priest sex abuse scandal without reforms centered on the abandonment of celibacy as a near-universal prerequisite for ordination to the Latin-rite priesthood.

No, celibacy does not “cause” the sex abuse of minors, and yes, abusers of children come from many walks of life. Indeed, most abuse occurs within families or circles of close acquaintance. But the ongoing Catholic scandal has laid bare an essential pathology that is unique to the culture of clericalism, and mandatory celibacy is essential to it. A special problem arises when, on the one hand, homosexuality is demonized as a matter of doctrine, while, on the other, the banishment of women leaves the priest living in a homophilic world. In some men, both straight and gay, the stresses of such contradictions lead to irrepressible urges that can be indulged only by exploitation of the vulnerable and available, objects of desire who in many cases are boys, whether prepubescent or adolescent. Now we know.

Celibacy began in the early church as an ascetic discipline, rooted partly in a neo-Platonic contempt for the physical world that had nothing to do with the Gospel. The renunciation of sexual expression by men fit nicely with a patriarchal denigration of women. Nonvirginal women, typified by Eve as the temptress of Adam, were seen as a source of sin.

But it was not until the Middle Ages, at the Second Lateran Council in 1139, that celibacy was made mandatory for all Roman Catholic clergy -- a reform bracing clerical laxity and eliminating inheritance issues from church property. But because the requirement of celibacy is so extreme, it had to be mystified as sacrificial -- “a more perfect way” to God. Monastic orders of both males and females had indeed discovered in such sexual sublimation a mode of holiness, but that presumed its being both freely chosen and lived out in a nurturing community. (Religious orders continue to this day with the vows of poverty, chastity and obedience as a proven structure of service and contemplation. The vows of such orders are a separate question.) But when the monastic discipline of “chastity” was imposed on all priests as “celibacy,” something went awry. The system broke down during the Renaissance and the Reformation, with the Counter-Reformation hierarchy more attached to it than ever.

Not sex, but power was the issue. The imposition of sexual abstinence was a mode of control over the interior lives of clergy, since submission in radical abstinence required an extraordinary abandonment of the will. In theory, the abandonment was to God; in practice, it was to the “superior.” The stakes were infinite, since sexual desire marked the threshold of hell. The normally human was, for priests, the occasion of bad faith.

Obsessive sexual moralism, along with that bad faith, spilled out of pulpits. The confessional booth became a cockpit for screening “mortal sins,” with birth control emerging as the key control mechanism over the laity. If they were willing to abide by this intrusion and its burdens, it was only because the celibate priest could be seen to have made an even greater sacrifice. They were subject to an even greater control.

As is suggested by the contemporary hierarchy’s apparent equanimity about the exodus of tens of thousands of priests, and the crisis of ministry it has caused, church authorities will pay any price to maintain a vestige of that control. That is why bishops have exchanged their once ample influence on matters of social justice for a strident single-issue obsession with abortion, a last-ditch effort to control the intimate sexual decisions of laypeople. When it comes to their clergy, the single-issue obsession remains celibacy.

This nearly changed at the Second Vatican Council (1962-65), when the bishops prepared to reconsider both birth control and celibacy. Until then, an insufficiently historically minded church had regarded such contingent questions as God-given absolutes. What was the point of even discussing them, since change was out of the question? But change was suddenly in the air. What? St. Peter was married? Even before the council acted, the myth that these disciplines were eternally willed by God was broken.

The conservative wing of the hierarchy panicked. Pope Paul VI astonished the council fathers, and the Catholic world, by making two extraordinary interventions that violated the letter and the spirit of the council. In late 1964, just as the fathers were about to debate the question of “responsible parenthood,” the pope ordered them not to take up the question of “artificial contraception.” Snap! Birth control was “removed from the competence of the council.”

But there was every sign that the council fathers, when they inevitably took up the subject of the priesthood, were still going to discuss celibacy, as if change were possible there. Yet it was politically unthinkable that the church could maintain the prohibition of birth control, the burden belonging to the laity, while letting clergy off the sexual hook by lifting the celibacy rule. Therefore, in late 1965, Paul VI made his second extraordinary intervention to forbid any discussion of priestly celibacy. A council had initiated the discipline, but a council was now not qualified even to discuss it. The power play was so blatant as to lay bare power itself as the issue. And just like that, Catholics had reason to suspect that celibacy was being maintained as a requirement of the priesthood because of internal church politics, not because of any spiritual motive. God was not the issue; the pope was. The abrupt elimination of the mystical dimension of vowed sexual abstinence left it an intolerable and inhuman way to live, which sent men streaming out of the priesthood, and stirred in many who remained a profound, and still unresolved, crisis of identity. Paul VI sought to settle the celibacy question with his 1967 encyclical Sacerdotalis Caelibatus, which proved to be a classic instance of the disease calling itself the cure.

The celibacy encyclical, maintaining the weight of “sacrifice” on clergy, prepared the way for the laity-crushing Humanae Vitae in 1968, with its re-condemnation of birth control. In response to the pope’s initial removal of birth control from the “competence” of the council, one of its leading figures, Cardinal Leon-Joseph Suenens of Belgium, rose immediately with a warning; “I beg you, my brother bishops, let us avoid a new ‘Galileo affair.’ One is enough for the church.” Galileo was famously forced to renounce what he had seen through his telescope, an imposition of dishonesty. (“And yet it moves,” he was reported to have muttered under his breath.) Paul VI’s twin re-impositions of the contraception and celibacy rules plunged the whole church into a culture of dishonesty. Catholic laypeople ignore the birth control mandate. Catholic priests find ways around the celibacy rule, some in meaningful relationships with secret lovers, some in exploitive relationships with the vulnerable, and some in criminal acts with minors. If a majority of priests are able to observe the letter of their vow, how many do so at savage personal cost? Well-adjusted priests may live happily as celibates, but how many regard the broad discipline as healthy? Insisting that celibacy is the church’s “brilliant jewel,” in Paul VI’s phrase, defines the deceit that has corrupted the Catholic soul.

But the most damaging consequence of mandatory celibacy lies in its character as the pulse of clericalism. The repressively psychotic nature of this inbred culture of power has shown itself in the still festering abuse scandal. Lies, denial, arrogance, selfishness and cowardice -- such are the notes of the structure within which Catholic priests now live, however individually virtuous many of them nevertheless remain. Celibacy is that structure’s central pillar and must be removed. The Catholic people see this clearly. It is time for us to say so.

[A version of this article appeared in The Boston Globe. James Carroll’s most recent book, Practicing Catholic, just appeared in paperback.]

Accountability | Mandatory celibacy at the heart of what's wrong