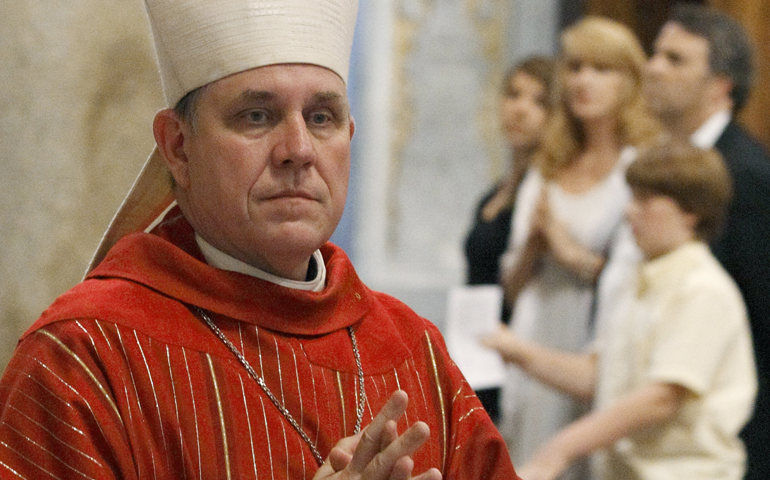 When Milwaukee Archbishop Jerome Listecki announced a bankruptcy reorganization plan Monday morning, he optimistically said "we are turning a corner" on the darkest chapter in the archdiocese's history.

But a bevy of appeals of decisions on key issues in the bankruptcy case as well as other federal and state lawsuits indicate the plan will not be the last word, even though it would leave the Milwaukee archdiocese with a $7 million debt.

Survivors of clergy sex abuse, the catalyst for the bankruptcy, said they were stung by what they considered the inadequacy of the $4 million victim compensation fund and dismissive of the $500,000 that Listecki said will provide a lifetime of therapy for survivors.

"It's like being raped all over again because we've had to fight for decades," said Monica Barrett, who was assaulted by a priest when she was 7 years old.

A lawyer for the survivors said he will object to the plan but added that Judge Susan V. Kelley could accept it despite his objections.

Michael Finnegan, a St. Paul, Minn., lawyer representing many of the victims who have filed claims, said neither he nor the victims were told of Listecki's reorganization plan before Listecki went on a talk radio program Monday.

"This is the first bankruptcy anywhere in the country where the plan was one-sided, without any input from the claimants," said Finnegan, who, with lawyer Jeff Anderson, has represented clergy abuse victims around the country. "Every other plan has been consensual."

Milwaukee is one of 11 Catholic dioceses in the U.S. to file for bankruptcy. The diocese of Portland in Oregon was the first to file in 2004.

The archdiocese of Milwaukee filed for bankruptcy protection in January 2011 after years of aggressively fighting lawsuits brought by victims. Most of the lawsuits in state court were dismissed on the grounds that the statute of limitations had expired, but the Wisconsin Supreme Court found that they could be sued for negligence if church officials knowingly placed abusive priests in positions where they could harm children.

In addition to the more than 570 victims, there is a long list of other creditors, including the archdiocesan pension fund. As unsecured creditors, the victims could end up at the bottom of the list when funds are disbursed if they do not accept the $4 million fund.

Anderson, the lead lawyer for the victims, said the average payment per victim elsewhere in the U.S. was $400,000. Peter Isely, Midwest director of the Survivors Network of those Abused by Priests, noted that Listecki's proposed compensation is far less than the estimated $12 million the archdiocese has spent on legal fees and even less than the $4.6 million offered during mediation before bankruptcy was filed.

Records released last spring as part of the bankruptcy showed that a number of abusive priests were paid as much as $20,000 by Dolan as an incentive to leave and not appeal to the Vatican. Dolan described the payments as acts of charity and not payoffs.

The Milwaukee archdiocese has asked that more than 75 percent of the 575 victims who have filed claims be dismissed from the bankruptcy and not compensated because the accused abuser was a religious order priest or because the victim had received payment earlier. Lawyers for the victims say religious order priests must have the approval of the bishop to function as a priest in a diocese and those compensated earlier were misled.

The archdiocese also has challenged older allegations, saying that the statute of limitations has elapsed. So far, only six of the claims have been dropped by the bankruptcy judge; a decision on others has been pending for almost a year.

A key issue -- whether $57 million transferred into a fund for the perpetual care of Catholic cemeteries can be used to compensate victims -- is expected to be argued in late spring before the 7th Circuit Court of Appeals in Chicago. A decision could come by the end of the summer.

Also still pending is whether two insurance companies, OneBeacon and Stonewall Insurance Co., are liable. Lloyd's of London recently settled with the archdiocese for $2 million, part of the reorganization plan. The other companies are balking, and a state appellate court found insurance companies did not have to cover intentional acts. The archdiocese continues to pursue claims against insurers in federal court.

In the letter on the archdiocesan website, Listecki noted that the archdiocese must pay lawyers for the creditors as well as their own and "the legal costs associated with it has depleted archdiocesan resources."

"They were the ones who drove up the legal fees," Anderson said. "They challenged every claim. They also move all the archdiocese's assets to other funds before filing bankruptcy. This is salt in the wounds of victims."

A month ago, records showed that the archdiocese had spent $11.5 million on legal fees, some for their own lawyers and some for the lawyers appointed by the receiver to represent all of the creditors. Finnegan said his firm has not received any money from the archdiocese.

"I'm sure they've spent more than $12 million," Finnegan said. "The split is probably 60 percent for their lawyers, 40 percent for the creditors. The only way we get paid is if our clients get paid."

In order to pay the bills and fund the restructuring, the archdiocese has taken some unspecified properties and used them as collateral to borrow money from the Cemetery Perpetual Trust, the same fund that had been moved off the archdiocesan books under Dolan and protected from the bankruptcy.

"This puts an end to any speculation about the money that was always intended for cemetery perpetual care and avoids the expense of a lengthy court appeal, which could take another year or more," Listecki said.

The $7 million debt incurred through the reorganization plan would be "part of our penance," Listecki said in the letter.

[Marie Rohde is a freelance journalist in Milwaukee.]