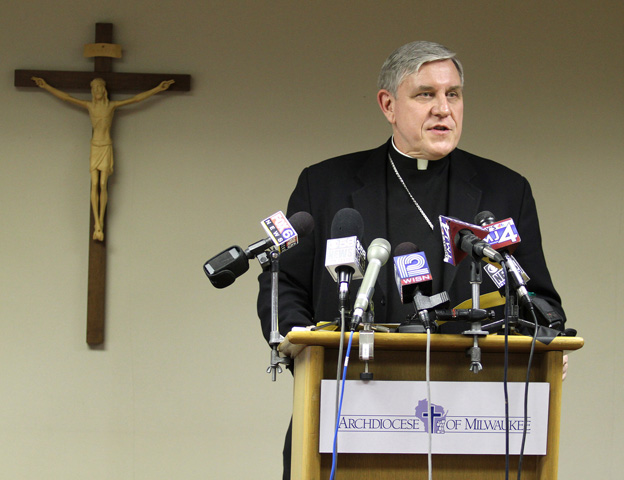 Milwaukee Archbishop Jerome E. Listecki answers questions from the media during an afternoon news conference, Tuesday, Jan. 4 at the Cousins Center, St. Francis, after announcing the Milwaukee Archdiocese will file for Chapter 11 reorganization of its financial affairs under the U.S. Bankruptcy Code. (CNS/Catholic Herald/Allen Fredrickson)

The Milwaukee archdiocese has put forth what it hopes is the final settlement plan that will end the church's nearly 5-year-old bankruptcy case, but victims of childhood sex abuse who filed claims against the archdiocese said they are stunned by the latest proposal. They allege that the $21 million allocated to victims is much smaller than that awarded in other bankruptcies and that it pits victim against victim.

Only sketchy details of the plan have been released in early August. The full plan is to be filed with the bankruptcy court by Aug. 24. The claimants will vote on the plan by Nov. 6 and a court hearing for its approval is set for Nov. 9.

The plan emerged during a three-day mediation "a few weeks ago in July," according to a statement by Archbishop Jerome Listecki. It was the fourth attempt to reach a mediated agreement and the only one done secretly.

According to a statement by the archdiocese, the plan sets aside $21 million to compensate 330 victims. However, as much as $7 million of that will go to lawyers who have been working on behalf of the victims without pay for more than a decade, according to a lawyer for some claimants.

Another 240 victims who filed claims will get nothing. The committee of claimants elected to set aside a portion of the award — about $184,000 or $2,000 for each of 92 claims deemed unsubstantiated and ineligible for payment by the archdiocese.

Monica Barrett, a woman who alleges she was raped by Fr. William Effinger in 1968 when she was 8 years old, was one of the victims who will receive no compensation. She had filed suit against the archdiocese in 1993 but the case was dismissed because it was past the statute of limitations. In 2011, lawyers for the archdiocese contacted her and suggested she file a claim.

"They said they wanted to resolve all the old claims," Barrett said, adding that she opted to contact a lawyer because she didn't trust the archdiocese. "I thought this would be my opportunity to get some measure of accountability for what happened to me."

Later, the archdiocese had her case dismissed from the bankruptcy, claiming she was Effinger's first victim and they could not have known he was an abuser. Effinger died in prison after being convicted of another abuse.

Barrett said the proposed settlement has been hard on all of the victims.

How much each claim will receive will be determined by an administrator appointed by the bankruptcy judge, Susan V. Kelley.

"It is exponentially the lowest bankruptcy compensation for victims in the United States," said Peter Isely, Midwest director of Survivors Network for those Abused by Priests (SNAP).

The average victim settlement after legal fees for all other U.S. church bankruptcies has been $300,000, Isely said.

For years, Wisconsin was one of the most difficult states for clergy sex abuse victims to get compensation.

According to BishopsAccountability.org, the average victim settlement in Wisconsin has been $50,000.

From the late 1980s until 1995, a number of civil lawsuits were filed against the archdiocese related to abuse. In 1995, a state Supreme Court decision ruled that the church could not be sued for negligence by victims of clergy sex abuse. Dozens of pending lawsuits were dismissed after that decision. For more than a decade, no new suits were filed.

Then in 2007, the state's high court ruled that if church leaders knew of an abusive priest and failed to act to protect victims, the church could be sued for fraud. That resulted in two dozen lawsuits that Listecki said prompted the bankruptcy filing. Victims and their lawyers charged that the archdiocese filed for bankruptcy to avoid the embarrassment of the public trials and potential jury awards.

"Why the archdiocese was ever allowed to maneuver and manipulate its sex abuse secrets into federal bankruptcy in the first place remains a mystery," said Isely. "Not only was the archdiocese flush upon filing, since entering the bankruptcy, the archdiocese has maintained that not a single one of the 575 victim cases are valid."

The archdiocese has stated that prior to bankruptcy it had paid some $30.5 million in settlements and for therapy. The largest portion of that sum, $16.7 million, was paid in 2006 to 10 California victims of a Milwaukee priest working in that state.

The bankruptcy lawyers and other professionals working on the case will ultimately receive almost $20 million in compensation, bringing the total legal fees to about $27 million, or almost twice the compensation the victims will receive.

But the fees for lawyers are undoubtedly higher. Legal fees for a related case challenging the transfer of $57 million to the Cemetery Trust Fund have not yet been revealed. The 7th Circuit Court of Appeals ruled that the transfer was not protected by the First Amendment or the Religious Freedom Restoration Act and could have been included in the bankruptcy. Listecki, the trustee for the fund, has asked the U.S. Supreme Court to take the case but according to the plan, that request will be dropped if the settlement is approved.

"Does that mean they will release their names of the religious order priests?" Isely asked. "They said they would release the names of the abusers in cases that were substantiated."

Claims filed by 157 victims will not be compensated for a variety of reasons, including receiving financial awards earlier or having claims that had previously been dismissed. Isely called for those reports to be made public.

"Who did the investigation?" Isely asked. "How did they determine that the claims were invalid?"

Acknowledging that many of the victims are unhappy with the proposed settlement, Michael Finnegan, one of the lawyers representing many of the claimants, said the agreement was forced on a committee of creditors. "It was a situation where the archdiocese forced to pick between a terrible option and a more terrible option."

How could it be worse?

The committee representing claimants "were faced with hundreds of additional claims being thrown out and another $5 million to $10 million being spent on the bankruptcy litigation," Finnegan said. "It would have been likely that the share left for survivors after all that would have more likely been $5 million."

The archdiocese has consistently said that while they do not doubt the allegations made by the victims, none of the claims are legally valid. The lead lawyer for the archdiocese, Francis LoCoco, complained in a recent taped court hearing that the lawyers for the other side were delaying a resolution of the bankruptcy and suggested that the cemetery trust could be liquidated and spent on litigating each survivor's claim.

The plan also establishes a $500,000 fund to pay for therapy for victims. The fund will be financed by all of the parishes in the archdiocese. However, the parishes and schools will be protected from future civil lawsuits brought by the claimants. At least one case is pending in state court against a parish.

The long-closed De Sales Preparatory Seminary, the Faith in Our Future Trust (an education and faith formation program), and other Catholic institutions are also protected from future lawsuits. No archdiocesan property will be sold as part of the deal.

According to the archdiocese, the plan will be funded with $11 million from insurance settlements and $16 million from the Cemetery Trust, $3 million of that a loan.

Listecki, in a written statement, said of the victims that "no amount of money could ever restore what was taken from these individuals" but added that it is the "best way to acknowledge the hurts of the past and try to reconcile for the future."

But, he said, the settlement will open a new chapter for the church. "Turning the page from this chapter of our archdiocesan history allows us to focus more fully on our mission — to proclaim Christ and make disciples through the sacramental life of the church."

Barrett, one of the victims who will receive nothing in the settlement, responded to Listecki: "I'm elated you can do that. We get to live this chapter for the rest of our lives."

[Marie Rohde is a frequent contributor for NCR.]