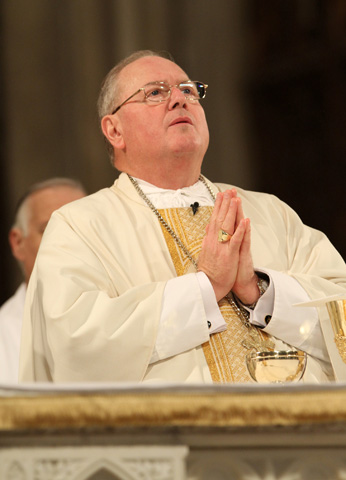 Cardinal Timothy Dolan says it isn't so, but advocates for victims of clergy sex abuse say they can now prove what they suspected: Dolan shifted almost $57 million into a cemetery trust fund to protect the money from lawsuits brought by victims.

The reason for the transfer: "I foresee an improved protection of these funds from any legal claim and liability," Dolan wrote in the letter, one of many documents the Milwaukee archdiocese released Monday.

Dolan's letter to the Vatican provided the " 'smoking gun' proving he committed federal bankruptcy fraud," said a statement released Monday by the Milwaukee chapter of Survivors Network of those Abused by Priests.

Dolan, now cardinal archbishop of New York, denied that the transfer of the funds was done to protect the money from impending bankruptcy proceedings. The Milwaukee archdiocese filed for bankruptcy in January 2011, two years after Dolan left.

"Unfortunately, we have already seen how the release of these documents will cause some to raise old and discredited attacks," Dolan said in a prepared statement.

The assets of the archdiocese are a key issue in the bankruptcy proceedings. In addition to the $57 million placed in the cemetery trust, $90 million was transferred to parishes. In Wisconsin, parishes are separate legal entities, and the bankruptcy judge, Susan V. Kelley, ruled earlier that the parish funds are not part of the proceedings.

Dolan was not asked about the cemetery fund during a deposition taken in February, days before he left for the conclave that elected a new pope. His deposition runs 144 pages and the questions largely focus on his handling of abuse cases. Under questioning, Dolan said the archdiocese paid priest offenders $20,000 so they would not fight laicization: They would receive $10,000 up front and $10,000 when the process was completed. In some cases, the priests continued to get health insurance coverage and salaries after being restricted from performing priestly functions.

In his prepared statement, Dolan disputed that the abusers were paid to seek laicization.

"Like it or not, bishops do have a canon law obligation to provide basic support like health care and room and board for their priests until they have finally moved on," Dolan said.

He also emphasized that the bishops have been true to their decade-old promise to remove from ministry any priest who abused a minor, to cooperate with law enforcement and to create child-safety measures.

But those representing the victims of abuse see it differently. The decision to transfer the archdiocese funds to the cemetery trust showed that Dolan made a conscious choice to avoid accountability when faced with lawsuits, Jeff Anderson, the lead attorney for victims who have filed claims against the archdiocese, said in a webcast press conference Monday.

And Peter Isely, a spokesman for the Wisconsin survivors group, said the Vatican signed off on the transfer of funds just days after the state Supreme Court ruled unanimously that victims of abuse could sue the church for fraud.

[Marie Rohde is a freelance journalist in Milwaukee.]