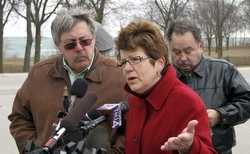 Lynn Pilmaier, a mother whose son was 7 years old when he was sexually abused, speaks at a news conference for the Survivors Network of those Abused by Priests March 25. (CNS photo/Allen Fredrickson, Reuters)

The Archdiocese of Milwaukee Jan. 4 became the eighth U.S. diocese to file for bankruptcy, claiming financial hardship because of payouts to people claiming to have been sexually abused by priests as children.

Archbishop Jerome Listecki made the announcement a year to the day following his installation as head of the country’s 21st largest diocese, with some 640,000 Catholics. Listecki, who said the move was necessary so that the church could continue to function while negotiating with alleged victims, recalled his installation homily.

"I spoke of the devastation of sin and its effect on us personally and as a community. We see the result of that sin today," he said. "This action is occurring because priest-perpetrators sexually abused minors, going against everything the church and the priesthood represents."

Attorney Jeffrey Anderson, who represents plaintiffs in some of the cases, disputes the archdiocese’s version of things. He said the action was taken to place a hold on fraud cases that were advancing. Anderson said he was scheduled to take a deposition tomorrow of retired Bishop Richard Sklba, who was described by former Archbishop Rembert Weakland as has “go-to guy” in matters of clergy sex abuse.

Weakland himself was forced from office in 2002 when it was revealed that he used nearly a half million dollars of archdiocesan funds to pay for the silence of a man with whom the archbishop was having an affair.

Diocesan spokesman Jerry Topczewski in an email said that “no deposition of Bishop Sklba was scheduled for January 6” and that a motion by Anderson “to delay a hearing regarding the deposition is what postponed the deposition.”

Anderson, in a phone interview, responded that just before the holidays a lawyer for the archdiocese informed Anderson that Sklba would sit for the deposition only if it were sealed. Anderson said he informed the archdiocese that he would “never agree to that.”

He said a hearing had been set for Feb. 23 on the archdiocese’s request for the deposition to be conducted under seal. However, Anderson said the bankruptcy filing puts on hold all discovery, including plans to depose Weakland and Archbishop Timothy Dolan, now of New York, who had been head of the Milwaukee Archdiocese for seven years.

In a statement posted on the archdiocesan website, Listecki said the bankruptcy filing has two goals: first, to fairly compensate those victims with unresolved claims, and second, to carry on essential ministries of the archdiocese.

During the past 20 years, the archdiocese has spent more than $29 million to cover costs associated with the sex abuse scandal, according to the website. “Since 2002, we have sold property, liquidated savings and investmens, and put all available real estate on the market in order to free up resources,” the statement says. In that time, the archdiocese has reached mediated settlements with nearly 200 individuals.

However, mediation recently broke down with remaining victims, meaning that the archdiocese would face not only increasing legal costs, but requirements for disclosure as cases moved to trial.

According to the archdiocese statement, “A Chapter 11 reorganization will enable the court to compensate all these individuals in a single process, ensuring that each is treated equitably.” The action would also serve as “a kind of ‘last call’ for financial claims against the archdiocese.”

David Clohessy, national director of SNAP, the Survivors Network of those Abused by Priests, told NCR that filing for bankruptcy has become a familiar ploy for dioceses which want to avoid jury trials and the disclosure of documents and files that would be required in such proceedings.

Anderson told the Associated Press that he had been pushing the archdiocese to release personnel files as well as names of the accused priests and those who protected them.

No bishop, said Clohessy, wants to repeat the humiliating spectacle that the world witnessed when Cardinal Bernard Law, then archbishop of Boston, was forced to undergo a deposition. The media attention turned it into what Boston Globe writers termed “for all intents and purposes a perp walk.”

Law’s credibility, already damaged at that point, sank even further when he said he was unable to recall any of the events surrounding his decisions to move a notorious pedophile from one parish, because he had molested children, to another parish.

“We’ve seen this time and again,” said Clohessy, not just with bankruptcy, but also in a diocese’s sudden willingness, several days into a trial, to dramatically increase awards “just before the chancellor or vicar general or bishop is about to testify.”

In the Milwaukee case, said Clohessy, the hierarchy does not want Sklba to have to take the stand and testify. Nor do they want the spectacle of Dolan, who led the Milwaukee archdiocese for seven years before being named to New York, “getting on a plane from New York with all the press there and getting off a plane in Milwaukee with all the press, get deposed and then go to court to try to have his testimony sealed.”

The Archdiocese of Milwaukee said that as of June 30, it possessed total assets of $98.4 million, of which more than $90 million “are monies that do not belong to the archdiocese, are restricted by donors for designated purposes, or are offset by corresponding liabilities.”

Only one other archdiocese, Portland, Ore., has filed for bankruptcy. Six other dioceses –- San Diego, Calif. (the largest to do so); Tucson, Ariz.; Davenport, Iowa; Spokane, Wash.; Fairbanks, Alaska; and Wilmington, Del., have sought Chapter 11 protection. The Oregon Province of the Society of Jesus has also filed for bankruptcy.