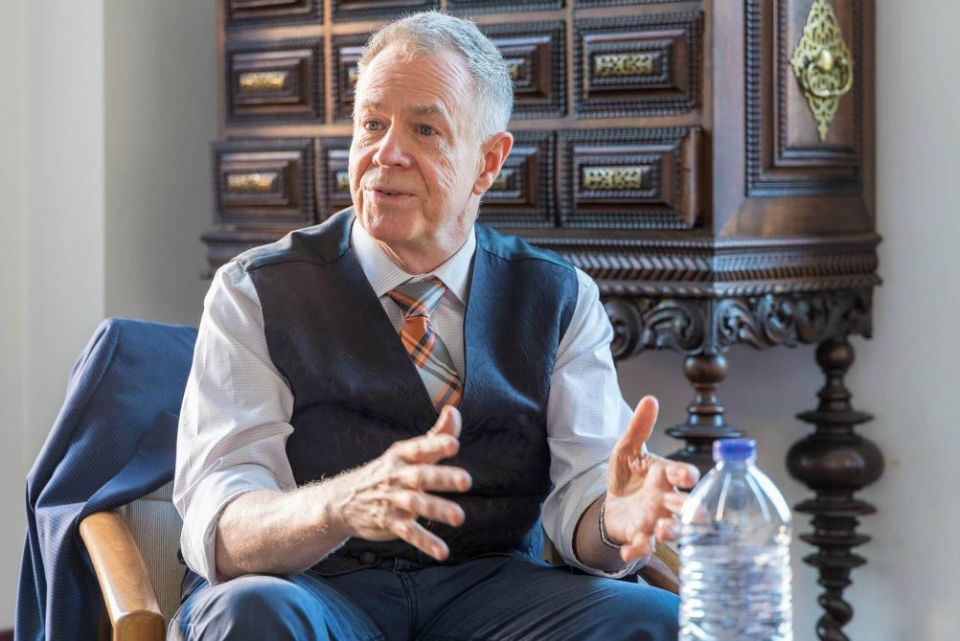 Jesuit Fr. James Keenan really wants to turn the whole deal on its head. The highly regarded theologian, taking in the endless discussion of the priest sex abuse crisis, had one of those moments of recognition — of seeing the thing right in front of us that everyone else has been looking past in search of answers.

And here's what I perceive to be the bottom line, the ultimate question he raises out of that awareness: "Is the God we worship vulnerable?"

If that is the case, and he believes so, then he asks: "Why couldn't we develop an ecclesiology based on the risk-taking vulnerability of God?"

If that were to happen, we'd have a church that would look and act quite differently from the one we know today. Imagine the seminary recruitment brochure that highlighted vulnerability as a quality the institution treasured and hoped to develop in the men who applied.

Keenan is Canisius professor and director of the Jesuit Institute and of the Gabelli Presidential Scholars Program in the theology department at Boston College. He is the rare "insider" to advance the conversation about sex abuse beyond the well-worn path of accountability issues already in place because of outside pressures on the clerical culture. His focus is on one of those elements that only the hierarchy itself can incorporate. No lawyer or review board or dicastery for accountability can force anyone to consider becoming vulnerable. The quality is, I believe, intrinsic to our sacramental tradition and as such is beyond the scope of law and institutional adjustments.

It is important to note, on this matter of vulnerability, that while it can not be mandated for individuals, Pope Francis recently initiated a reform — eliminating the papal secret — that will accomplish a certain institutional vulnerability. In short, there's no more hiding the truth. Whether that, in turn, causes a change in culture is quite another question.

In a previous Connections, I quoted a talk given by Thomas Doyle, an inactive priest who was one of the earliest clerical advocates for abuse victims. "The common element of causality" in the abuse crisis, he said in a speech delivered at Gonzaga University last October, "has been the role of the bishops and the inadequacy of the response."

At another point in that address, he said: "The horrific history of sexual violation and the systemic, destructive response, now out in the open, has acknowledged what the hierarchy does not want to face: The People of God and the Hierarchical Governmental structure are not one and the same, and the hierarchical structure we have lived with can hardly be blamed on Christ as its author."

Keenan, one of 58 Boston priests who in 2002 signed a letter calling for Cardinal Bernard Law's resignation, refines that insight, drawing a further distinction between ordinary clergy and hierarchy. He came upon the term "hierarchicalism" when he saw it used by Canadian moral theologian Mark Slatter, who described hierarchical culture as "the gold carrot for those predisposed to its allurements."

What those in the culture know well, says Keenan, (and what most of us in the pews are unaware of) "is that the formative pathways for future bishops are generally speaking different from those for average priests."

For instance, "future bishops" (most of them) don't study at the local regional seminaries. "Rather they are sent to Rome for theology and examined in Rome in a variety of ways." It is there where they first encounter "hierarchical 'allurements' that most priests do not receive: dinner with visiting bishops, meetings with other bishops, the possibility of being appointed the bishop's contact in Rome. Receiving the bishop's confidences. Being welcomed back whenever returning home. There's a 'grooming' that happens that's radically different from anything that happens to other seminarians. They are being selected for another club," writes Keenan.

A reciprocity exists between clericalism and hierarchicalism. He describes the latter as "brutal" and as "the exclusive power culture of the episcopacy."

What we are only beginning to see is that hierarchicalism and its lack of accountability and ability to act with impunity will be harder to dismantle than clericalism and in fact will guarantee the survival of clericalism, for the former is the father and promoter of the second.

He proposes an alternative "culture of vulnerability" as a path to a "servant priesthood" and a "servant episcopacy."

"There is a profound graceful irony in this: for it is precisely vulnerability that our clerics and hierarchs ignored throughout this scandal."

Keenan cites T.H. White's The Once and Future King in which the human embryo is "the bearer of human vulnerability." It is a remarkable vision, says Keenan, "for behind this decision is the assumption that we are made in God's image and that if we are vulnerable, so is God."

He further cites Irish moral theologian Enda McDonagh's insight that God is revealed "as vulnerable by the birth of Jesus in Bethlehem, his life in Nazareth, and by his death on Golgotha."

The scholarship he employs funnels the thought to the most important point: seeing vulnerability "not as a liability, but as something which establishes for us as human beings the possibility to be relational and therefore moral."

Keenan's distillation of the point is worth quoting at length:

It is not possible, in a column, to do justice to the full scope of Keenan's paper or the scholarship that builds the case. That's why I encourage taking Keenan's entire paper, together with Doyle's Gonzaga talk, and considering them as perhaps the best foundation we might find for beginning the phase of the discussion about sex abuse that has remained out of reach.

There's a reason why Archbishop Charles Scicluna of Malta, widely regarded as one of the hierarchy's most knowledgeable and honest on this issue, asked Keenan to deliver the lecture to his priests and had it reprinted in the journal of the Faculty of Theology at the University of Malta. Keenan has also delivered the paper in Milan and at Oxford. He said an article on the concept will be published in the March issue of Theological Studies, and that same month he will be lecturing on the topic in Boston.

Keenan points out that Scicluna told him that all of the measures of accountability that have been enacted, certainly including the elimination of secrecy, are steps in vulnerability. The steps in accountability, all done in response to outside forces, have, indeed, made the church's structures vulnerable to an unprecedented degree.

But what about the persons, the individuals, especially those seduced by the "allurements" of privilege and power? Can the church alter both its preferences in those selected and the path to leadership? Can it alter what it means by leadership?

Spoiler alert — I move here to the very end of Keenan's paper because, having made the strong case, he returns to the central question. He sees "each offering, each proposal, each critique" delivered by the faithful as "a hope that our defensiveness and our guard come down and we become what we really are, vulnerable."

"If we let the vulnerability of our God enter into our seminaries and our chanceries," he speculates, "maybe we could put away some of those allurements that we already know are as banal as they are compromising."

He sees a collegial, church-wide coming to terms with "how precisely we should reform our seminaries, our chanceries and of course, the Vatican, but it will be by vulnerability and not by the smoke and mirrors of hierarchical domination that has already taken the life out of so many."

A version of this story appeared in the Jan 10-23, 2020 print issue under the headline: Vulnerability as strength .

Georgetown panel deals with 'moral catastrophe' of church's own making