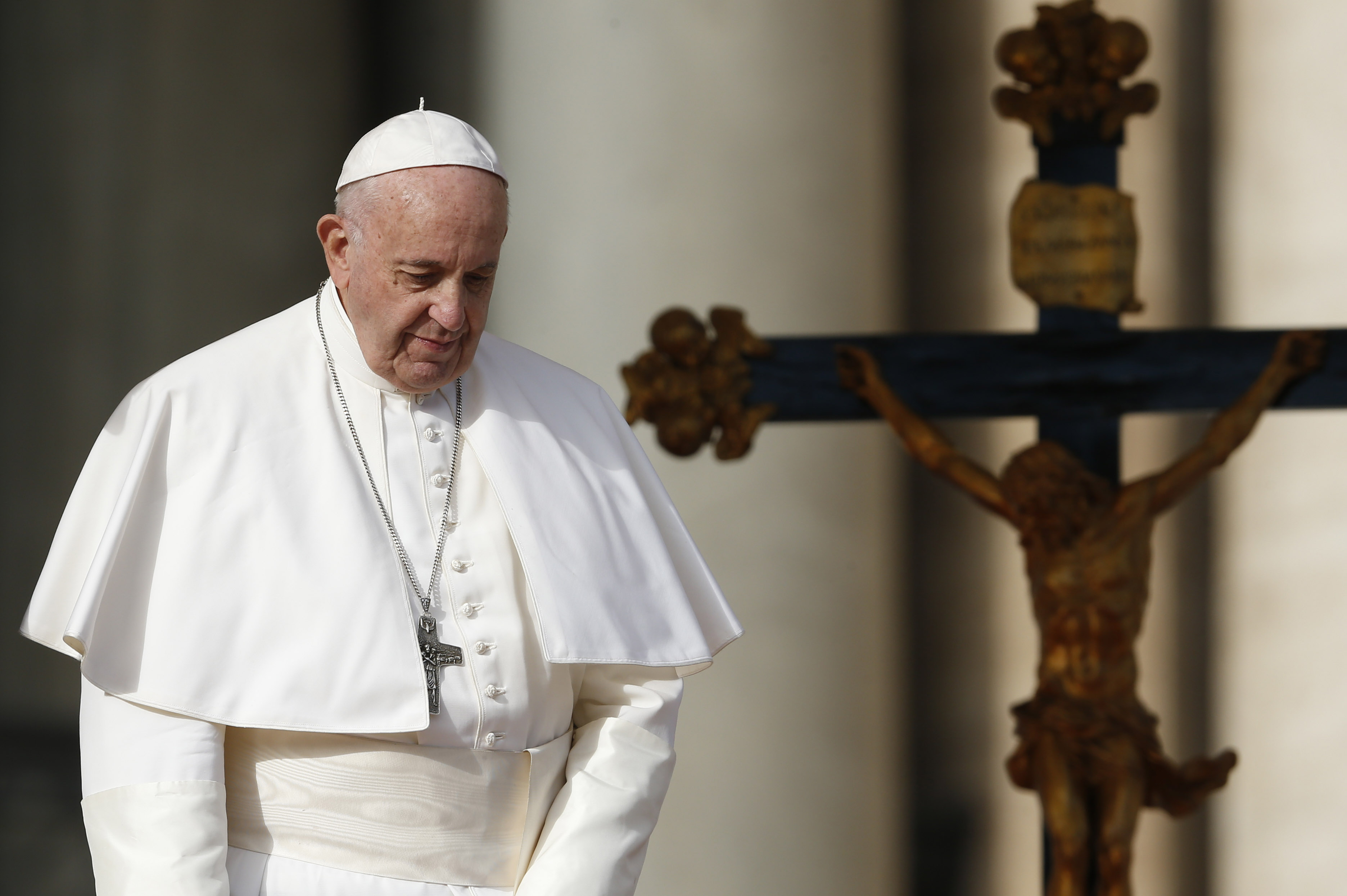 Pope Francis walks near a crucifix during his general audience in St. Peter's Square at the Vatican Nov. 21. (CNS photo/Paul Haring)

What a disappointment the bishops' meeting in Baltimore turned out to be. It was supposed to be a defining moment in the church's response to the latest revelations in the sexual abuse crisis. It was an opportunity for the church to turn the corner.

At the last moment Rome intervened to prevent the bishops from voting on their agenda.

What are we to infer from this Vatican intervention? Pope Francis asks the bishops to wait until after a February meeting in Rome before addressing the crisis in the church. Does this mean there is no urgency to the current crisis? Does it mean Francis wants to micromanage the church's response? Or, does it mean that Francis has lost control over the levers of power at the Vatican and somebody else is calling the shots?

It is difficult to fathom why Francis would intervene so clumsily as the bishops were beginning their meeting. He has been an advocate for decentralizing the Vatican. He has encouraged bishop conferences to be more aggressive. He has openly encouraged Catholics to speak out and share their thoughts and ideas. He has deemphasized clerical dictates and the imposition of fiats from above.

It is also true, however, that Francis has been compromised by Cardinal Viganó's accusations of a coverup in which he has implicated the pope himself. It would not seem that Francis would want to prevent an ecclesiastical body from addressing such an urgent issue when they seem prepared to do so. Why would he want to appear reticent to move on an issue that endangers his entire papacy?

Again, it appears that someone else or some group may be directing moves at the Vatican, or that the pope really doesn't know what he should do in this case. Indecision and uncertainty are not friends of Francis right now.

Unfortunately, there is little room for optimism regarding our church currently. The hopes that many of us had for Pope Francis have not been realized. We are coming to understand that he is no John XXIII. He has been wanting in addressing women's issues, and now he has stumbled and is slow to move on the sex abuse crisis. Conservative voices are strong, insistent and powerful.

My guess is as little as possible. Our hands are tied until after February, so events are likely to get ahead of us.

Archbishop William Lori of Baltimore encouraged bishops at the conference to move forward despite the Vatican's request. He talked about what individual bishops could do in their dioceses. He talked about what he has done in Baltimore. Most of all he highlighted the importance of getting out among the people and listening to them.

If we are patient perhaps the February meeting will begin a meaningful process of a serious and credible response to the issues the church is currently facing. I am not holding my breath. I think there is a better chance that Democrats and Republicans will work together to get things done for the benefit of the American people. Even when we are hearing positive talk, as we have heard from Pope Francis since his papacy began, there is little meaningful action.

My sense is that as the Vatican and the hierarchy currently stand, progressives, and even moderates like Pope Francis, are going to be restrained from any forward movement. At the same time traditionalists will use their loud and powerful voices to demand a church that will essentially be a museum piece offering a glimpse into what they consider the glories of the past.

In short, we are at a stalemate. I see no indication that traditionalists can be moved one inch from their implacable viewpoint. Their moves against the current papacy are beyond anything I have ever seen or could have contemplated. One would have to go back into the deep dark history of Renaissance popes or the Avignon papacy to find anything remotely resembling the current internal and concerted attacks on this papacy.

So, what are the rest of us to do? We can simply accept the traditionalist ascendancy in Rome and resign ourselves to their view of a church triumphant with all its glitzy accretions and few people in the pews. More Catholics will certainly drift away from a church they see as irrelevant and unable to realistically address the crises of our times.

Within the church it seems there are only two options. One is schism, but schism rests pretty much on events happening at the level of the hierarchy that devolve into a major break. The second option is a kind of underground church. Thus, Catholics would go their own way, something like cafeteria Catholics on steroids. They would join with like-minded priests, including female priests, and together they would establish communities of Catholics worshipping and believing in ways that are apart from what might be going on in Rome.

Those who want a more vibrant, living church that is responsive to the world we live in may find it necessary to forget the Vatican and move forward with an enlightened clergy, lay participation that has real decision-making power and church structures that are prepared to move into the 21st century.

I hope future events will prove me wrong, but I find it difficult to construct a plausible scenario that could bring us forward out of the present morass.