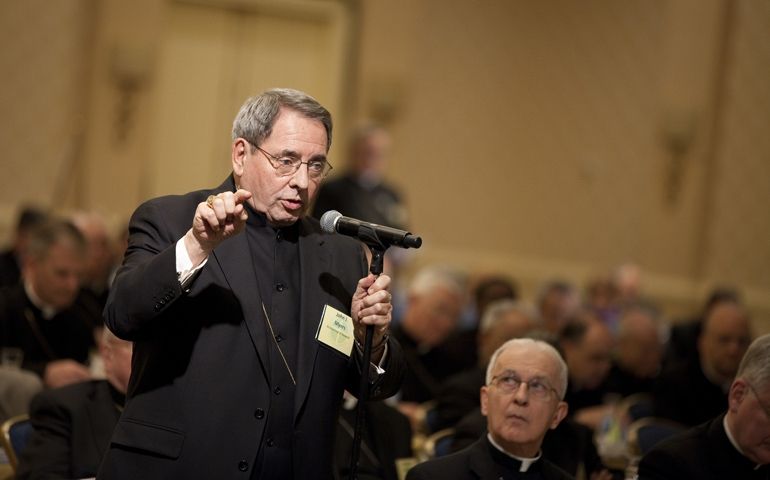 The vicar general of the Newark, N.J., archdiocese is resigning effective immediately "as a result of operational failures" stemming from the case of a Newark priest who was ministering to youth in violation of a court agreement banning him from such ministry, a letter signed by the Newark archbishop says.

The letter obtained by NCR Friday evening is signed by Archbishop John J. Myers of Newark. It says that when Myers "learned several weeks ago that Father Michael Fugee may have violated a lifetime ban on ministry to minors, I [Myers] immediately ordered an outside law firm to conduct a full and thorough investigation of the matter and to cooperate with the Bergen County Prosecutor in all areas."

"The investigation found that the strong protocols we presently have in place [to handle accusations of sexual abuse of minors by clergy] were not always observed," the letter reads.

Fugee was arrested May 20 for violating a court agreement not to minister to children. In July 2007, Fugee, his lawyer, the Bergen County prosecutor and the Newark vicar general, Msgr. John Doran, signed a memorandum of understanding that restricted the priest from “any unsupervised contact with or to supervise or minister to any child/minor under the age of 18 or work in any position in which children are involved.”

A jury had convicted Fugee in 2003 of sexual assault of a 14-year-old boy, but an appeals court overturned that ruling in 2006 on a technicality, one unrelated to a confession from Fugee in which he admitted to intentionally groping the boy. The memorandum of understanding was signed to avoid a retrial of those charges.

Despite that agreement, the Newark Star-Ledger newspaper reported last month that in the past several years Fugee had attended youth events, such as retreats and weekend trips, and heard confessions from minors. The archdiocese had said that Fugee was assigned to administrative duties in the chancery and was supposed to be under supervision.

But who was responsible for supervising Fugee remains an unknown.

Myers had remained mum on the Fugee case until today, instead allowing his spokesman, Jim Goodness, to issue statements. But Goodness told NCR May 21 that the archbishop would break his public silence “at some point fairly soon,” and would address critics’ calls for his resignation at that time.

The letter Myers sent to pastors Friday did not address his own resignation, but it did announce the resignation of Doran.

"So, effective immediately, the Vicar General, Monsignor John E. Doran, has resigned his post and will no longer hold a leadership position with the Archdiocese. As a result of operational failures, both Monsignor Doran and I felt that the Archdiocese would be best served by his stepping down as Vicar General," said the letter.

Doran's resignation "clears the way for making more effective changes in our monitoring function. I am transferring that function to the Office of the Judicial Vicar of the Archdiocese," Myers states.

The letter also announces that Myers is "appointing a new special advisor to our Archdiocesan Review Board. Additionally, I have committed to provide more resources to the Review Board, an independent group of expert, and mainly lay, volunteers who help the Archdiocese and me investigate allegations of clergy sexual misconduct involving minors and recommend any action under Church law."

"We want our procedures to be among the strictest in the Catholic Church," Myers' letter says.

Myers expanded on his remarks in the letter to parishioners in a guest column posted online by the Star-Ledger, the newspaper that has twice called for Myers' resignation in the past month.

“We are not perfect. But people who suggest we have not taken seriously the oversight of our clergy and do not put the security and safety of our families and parishioners, especially our children, at the forefront of our ministry are just plain wrong,” he wrote.

In a Feb. 7 letter to his diocesan priests, made public by the Star-Ledger in April,  Myers defended the archdiocese’s implementation of the charter, after local media reported in February that Fugee had been appointed co-director of the Office of Continuing Education and Ongoing Formation of Priests.

“These claims are baseless,” the archbishop said in reference to the criticism that the appointment indicated a lax application of the Dallas Charter.

Myers went on to affirm the archdiocese’s adherence in a number of areas, including immediately reporting allegations to law enforcement; providing support to abuse victims; and its use of a review board since 1993.

“I have always felt that, as my representatives, they [the review board] have looked both carefully and compassionately at the needs and circumstances of victims of clergy sexual abuse,” he wrote to diocesan priests.

At the end of the letter, Myers defended his decision to reinstate Fugee to ministry, saying the archdiocese “followed all of these elements of the Charter and the Memorandum of Understanding in the more-than-a-decade-old case involving Father Michael Fugee.”

But defense did not appease critics, many of whom pointed toward the lack of transparency in the process, such as the archdiocese’s policy to keep review board members anonymous.

In the May 26 letter to parishioners, Myers refrains from commenting on Fugee himself beyond referring to the “seriousness of the situation with Father Fugee.” He offered a stronger defense of the priest three months earlier in the letter to his priests, describing Fugee’s case status as both “acquittal and dismissal of charges.”

That description was not accurate, a spokeswoman for the Bergen County Prosecutor’s office told NCR in early May.

“He [Fugee] wasn’t acquitted. ... The decision had been appealed, and it was reversed,” Maureen Parenta said. “They called for a retrial, so rather than going through another trial, our office had proposed the memo of understanding and that’s how this was resolved.”

The resignation of Doran comes as the fifth resignation this month related to the Fugee scandal. On May 2 Fugee submitted his resignation from active ministry to Myers, though he remains a priest.

Two days later, Fr. Thomas Triggs resigned as pastor of St. Mary Church in Colts Neck, N.J., part of the Trenton diocese, and one of the parishes where Fugee had ministered to children in recent years. Also resigning from the parish were Amy and Mike Lenehan, the parish’s youth ministers who invited their friend Fugee to assist with retreats and other activities.

[Brian Roewe is an NCR staff writer. broewe@ncronline.org. Dennis Coday is NCR editor. dcoday@ncronline.org and on Twitter at @dcoday.]

MAy 26 letter from Newark Archbishop John J. Myers to parishioners

A New York diocese filed for bankruptcy. Will others follow?

Law professor: Philadelphia jury has much to consider in sex abuse trial