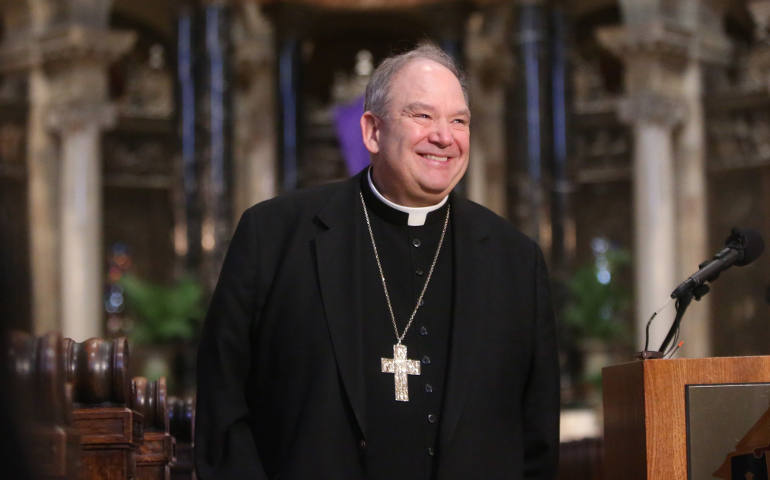 Archbishop Bernard A. Hebda smiles as he addresses the media at a news conference March 24 at the Cathedral of St. Paul in St. Paul, Minn., announcing his appointment as archbishop of St. Paul and Minneapolis. (CNS photo/Dave Hrbacek, The Catholic Spirit)

Bernard Hebda woke up Tuesday morning a prelate with two temporary titles -- apostolic administrator to the St. Paul-Minneapolis archdiocese and coadjutor archbishop in Newark, N.J. -- attached to his name. By the day’s end, a third replaced both: archbishop-designate of St. Paul-Minneapolis.

“I am humbled once again by Pope Francis’ confidence in me in calling me to this local church, which has been so influential and important in the upper Midwest,” he said during a press conference held inside the Cathedral of St. Paul.

The announcement Thursday morning of Hebda’s appointment as the 11th archbishop of the Twin Cities answered one question: Who would succeed Archbishop John Nienstedt who resigned last June under the shadow of an ongoing clergy sexual abuse scandal and related bankruptcy filing and criminal charges. But the announcement raised another: Who will Hebda, no longer just a passerby in the historically important archdiocese, become as a now-rooted resident?

“How will he present himself as an archbishop, now that he’s got the powers of office and permanence?” asked Charles Reid, a law professor at the University of St. Thomas in Minneapolis whose said his initial impressions of Hebda have been fairly positive, viewing him as careful and conciliatory. “Will he change now that he’s an archbishop?”

In his re-introductory press conference, Hebda, set to be installed May 13 (the Feast of Our Lady of Fatima), acknowledged that his permanence in the area will likely lead him to approach his ministry in a different way.

“I certainly think that it will because the perspective is very different,” he said, drawing an analogy between the differences between dating and married life.

In his nine months as apostolic administrator, a role typically viewed as a placeholder, Hebda, 56, explained his primary concern has been “do no harm.” Going forward, he will look “to set a longer course” for the archdiocese to move forward. Without getting into specifics, the archbishop-designate said he would begin by looking for new ways to collaborate and include more people in the decision-making process.

Immediate decisions are looming with the bankruptcy process. The next major date comes May 25, the deadline for claims to be filed against the archdiocese under the Minnesota Child Victims Act. According to Jeff Anderson, one of the attorneys representing survivors of clergy sexual abuse in the proceedings, roughly 400 claims have been made against the archdiocese to date.

Anderson told NCR he could not comment on the bankruptcy proceedings. As for Hebda, added “it’s too early to get a read on how engaged he’s going to be now that he’s appointed.”

‘He comes in, in our view, with a clean slate and that’s the way we’re going to treat him,” Anderson said.

In bankruptcy proceedings and abuse lawsuits Anderson has participated in with other dioceses, including San Diego, Davenport, Iowa, and Wilmington, Del., the victims’ attorney said those cases largely were settled “because ultimately the bishop became heavily engaged and invested in doing the right thing. And it is my hope that that’s what [Hebda] will do, and we will see that through his actions.”

“There’s still a lot of work that needs to be done. And having somebody assigned here now in a permanent assignment may foreshadow more active involvement,” he said.

The path the bankruptcy proceedings has followed to date has not inspired much hope in Jennifer Haselberger that the archdiocese will set out on a new course.

“I think what troubles me most about this appointment is that, in terms of the direction of the archdiocese … nothing really has changed,” said the former chancellor for canonical affairs, who resigned the post in April 2013 after frustrations with how she saw the chancery under Nienstedt handling and responding to sexual abuse allegations.

Priests and parishioners have shared with her their concerns with the bankruptcy, including the possibility that the parishes, separately incorporated from the archdiocese under Minnesota law, could at some point face lawsuits themselves.

“You can imagine how they feel hearing that the parish is going to be sued because the archdiocese can’t get this resolved,” she told NCR.

In a statement, David Clohessy, director of the Survivors Network of those Abused by Priests said Hebda "benefits from being judged by the extraordinarily low bar" set by Nienstedt, and expressed little hope he would lead to increased efforts to better protect children or expose clerical misconduct.

Outside of bankruptcy, Haselberger highlighted other examples of a lack of change in the archdiocese: its lack of intervention in preventing Nienstedt from offering his assistance at the Battle Creek, Mich., parish of a friend; its handling of Fr. Timothy Dolan, who is under investigation for child pornography; and the recent decision to allow Fr. Paul Moudry to return to ministry.

Another aspect pointing toward continuity over change, she said, is that many of the people named in the criminal charges, brought in June by Ramsey County Prosecutor John Choi, remain in the chancery.

“There hasn’t been a change. And when [Hebda] came, his original statement was he wasn’t here to make changes, he was here just to kind of carry on. And so I think people accepted that, because there was an idea of, OK this is going to be for a period of time and then someone new would come in and we’d finally get that kind of action. Now that seems like it’s been taken from us,” Haselberger said.

Another abuse-related matter still left unaddressed concerns the status of the Greene Espel report into allegations against Nienstedt of sexual malfeasance​ with adult males. Questions regarding the report resurfaced during the backlash that followed Nienstedt to the Michigan parish. So far, the archdiocese has remained silent.

Beyond healing the wounds of sexual abuse and settling the archdiocese’s finances, Reid said the archdiocese under Hebda will have to face the challenge of bringing back the Catholics jaded by the crises and policies, including the fight against Minnesota’s same-sex marriage law, of his predecessor.

“There is massive demoralization, massive alienation he needs to address. And the sooner he can address that, the better,” he said.

On that front, the early returns appear promising for Hebda. In his nine months in the Twin Cities as apostolic administrator, he held a series of listening sessions designed for members of the archdiocese to provide input on the qualities they hoped for in a new archbishop.

Paula Ruddy, a member of the Catholic Coalition for Church Reform (CCCR) of Minnesota board, said the group found Hebda “very understanding and willing to listen” during their meeting with him in September.

Bob Beutel, co-chair of CCCR, added that Hebda reflects several of the qualities they hoped to see in a new bishop, namely “a pastoral person … someone with integrity who will be open and honest with the people.”

Hebda’s welcoming personality has the reform-focused group excited with his appointment.

"He is genuinely, sincerely attentive to the people he talks to which is a wonderful characteristic in a bishop," Ruddy said.

Beutel recognized that Hebda will have challenges, including work toward healing for survivors of sexual abuse and the parish communities where the abuse occurred. Add to that "generally retaining the trust of the people in the parishes and to make the archdiocese a support entity rather than an enforcement or police entity."

Haselberger also acknowledged that Hebda’s outreach has “kind of declawed” some of the archdiocese’s fiercest critics, including CCCR. “And that’s a good thing,” she added.

The premise of the listening sessions was to assist in identifying Hebda’s replacement. Now that he’s Minnesota-bound, the questions about vacancies move to Newark. Named coadjutor archbishop to that archdiocese in September 2013, Hebda, who came from the Gaylord, Mich., diocese, was in line to replace Myers, who reaches the mandatory retirement age of 75 in July.

Myers is and will remain archbishop in Newark for the time being, archdiocesan communications director Jim Goodness told NCR. Canon law only requires a bishop to submit a letter of resignation to Rome when he turns 75; the pope determines how quickly to accept it

“We will be looking forward to the next steps and the Holy Father’s decision in terms of how he will address a successor for Archbishop Myers in the near future,” he said, adding “it’s something that we know is prominent and coming,” but that the archdiocese will continue with Myers in charge until a new bishop is installed.

In the nine months in the dual roles, Hebda has split his time in the archdioceses, relying at times on technology to communicate with staffs in either state.

“We see this as bittersweet. We’ve come to know and respect Archbishop Hebda and he has very definitely been a part of the life of the church of Newark since he first came here,” Goodness said.

Hebda had just returned Tuesday to Minnesota after spending the weekend in Newark, including taking part in its Chrism Mass on Monday night. The news that he would soon be calling the Midwestern state his home came as a surprise.

“I would have brought a better suit and made sure that I had a haircut,” Hebda joked at the press conference at the cathedral.

Hedba’s first actions as archbishop-designate will come later Thursday evening at the cathedral where he will preside at Holy Thursday services. Asked whether there was significance to his appointment coming on the first day of the Triduum, he responded, “I can tell you it was obviously of significance for someone else, too.” Archbishop Carlo Vigano, apostolic nuncio to the U.S., proposed the date for the announcement.

“And in his mind, there were three things that were very important: Throughout the universal church, it’s a day when we celebrate the priesthood, and so certainly I think that the Holy Father was really trying to strengthen the priests of this archdiocese, so that emphasis on priesthood I think was very important.

“It’s also the day when we as Catholics celebrate the Eucharist, which is that sacrament of communion, a community in our lives. And I think it really accentuates the fact that the bishop is called to be an instrument of unity in the church, and so I think that certainly is significant for this day, most especially in Holy Week, on Holy Thursday.

“And then also this evening, part of our ritual on Holy Thursday is always the washing of the feet, and it really is that opportunity to emphasize that the bishop is called to be one who serves, that all of us are called to imitate Christ, but the bishop has to be doing that, as well,” Hebda said.

[Brian Roewe is an NCR staff writer. His email address is broewe@ncronline.org. Follow him on Twitter: @BrianRoewe. Elizabeth A. Elliott contributed to this report.]