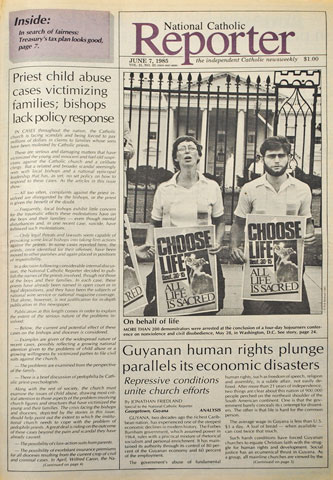 Editor's note: This story is part of a weeklong series dedicated to looking back on 30 years of the abuse crisis in the Catholic church. Read all parts of the series.

We published our first major exposé on the abuse of minors by clergy in our June 7, 1985, issue, just days before the U.S. bishops were to gather at St. John's University in Collegeville, Minn., for their annual June meeting. Our coverage comprised a long piece out of Louisiana by Jason Berry about a young priest-pedophile in the Lafayette diocese; an equally long report on other predatory priests around the nation by Arthur Jones, our Washington bureau chief; and an editorial written by Jones that scored the bishops for their cover-ups. "Keeping the affair quiet has usually assumed greater importance than any possible effect on the victims themselves."

Berry and Jones have pursued careers in the best traditions of American journalism -- to comfort the afflicted and afflict the comfortable -- for the common good of their communities, and often of the entire nation. They do solid journalism. I am proud to have been the editor that provided space and protection for this kind of reporting -- two parallel stories within the clergy abuse scandal: the obscene molestation by priests of pre-pubescent and pubescent children, and the enabling cover-ups by their bishops.

We saw these dual patterns from the start. It took years for us to fill out the picture -- and we had to do it pretty much on our own. Other Catholic publications wouldn't touch the story. Most were controlled by bishops who had little or no desire to say anything bad about the church. The secular dailies back then, including The New York Times, seemed unwilling to confront the Catholic church.

If the bishops had listened and reacted differently in June 1985 when they were becoming aware of the larger scope of the scandal and its many ramifications, the outcome could have been radically different. At the same time we published our reports, the bishops were receiving a 92-page study by psychiatrist Fr. Michael Peterson, canon lawyer Dominican Fr. Thomas Doyle, and civil attorney Ray Mouton.

The study outlined the seriousness of the clergy sex abuse issue and potential ramifications should the bishops not face it squarely. The document stated that while help can be provided for abusive priests, there was "no hope" for a certain cure and that a bishop "should suspend immediately" a priest accused of sexual abuse when "the allegation has any possible merit or truth."

After discussing it, the bishops tabled and then ignored the report. At the end of the Collegeville gathering, Bishop James Malone of Youngstown, Ohio, then president of the National Conference of Catholic Bishops, called a news conference to tell the media -- without even mentioning the Doyle report -- that the bishops had set up a special "pedophilia committee," to be chaired by Bishop Michael Murphy of Erie, Pa.

As it turned out, there would be no pedophilia committee. It took the bishops seven more years to establish their first subcommittee on sex abuse. Even then, most bishops continued to deny there was a problem -- until the Boston debacle of 2002.

I had known Peterson when we were both students at Stanford University in the 1960s. We were both active in the university's Newman Club. Years later, after I had become NCR editor and after Peterson had become a priest and director of the St. Luke Institute in Silver Spring, Md., we were to be in touch again.

Early in 1985, he phoned to tell me about his work at the institute and his collaboration with Doyle and Mouton. He talked about but did not share with me the physical report -- at least not initially. He and his collaborators wanted to be able to tell the bishops it was for their eyes only.

We continued reporting the clergy sex abuse story. For many younger Catholics today, it is difficult to imagine what it was like back then, when priests and bishops stood almost universally on pillars of respect and when any voice accusing one of them of abuse was viewed with suspicion and even disdain.

During those early years of our coverage, we would often get calls from abuse victims who simply needed someone to listen to them, who would begin with the premise they were not making their stories up. They needed sympathetic ears to validate the truth of their trauma -- often after their own families and their pastors had found it impossible to believe them.

Meanwhile, I had become a polarizing figure; some Catholics, in print and elsewhere, called me "the son of Satan." Our critics were convinced NCR had set out to "tear down the church." It was a frequent cry. We'd often print their letters. We lost hundreds, if not thousands, of subscribers.

Charges against our news judgment came home when one NCR board member, Jesuit Fr. Joseph Fichter, called for my resignation. When he received no other support, he resigned from the board.

Looking back at another part of this story, I'd like to share something I have rarely told anyone outside of family and the inner ranks at NCR. I have had special empathy with sex abuse survivors because I am one of them. A Catholic priest molested me when I was 12. The priest (as he died in 1999 and so cannot defend himself, I will not name him) was a friend of the family when he invited me to join him on a three-day vacation to the Wisconsin Dells. My parents happily consented. He molested me the first night in the hotel. It was one of the most frightening nights of my life.

The next morning, I complained of a toothache, and insisted he take me home. Instead, he took me to see a dentist who said he found no reason for my tooth pain. After I insisted I wanted to go home, he drove me back, more than a three-hour ride. It seemed endless.

When we arrived, the priest dashed through the front door to tell my parents I had ruined his first vacation in five years. As a punishment, I was sent to my room with no supper.

The next day, I told my older brother what had happened. He told my mother. She went to see the pastor of our parish, Milwaukee Auxiliary Bishop Roman Atkielski. He asked to meet me the next Saturday inside St. Sebastian Church where he waited for me in a confessional. I knelt down and distinctly remember him asking, "Did he touch your private part?"

"Yes." Haltingly, I told him the whole story.

My mother met with him again. He promised to take action and to remove the priest from our neighborhood -- but never did. The priest, a Salvatorian, remained in his ministry.

Some years later, while at Marquette University High School, I encountered three other classmates who knew the priest. He had molested them, too.

To this day, I find it difficult to measure the personal impact the experience had on my life. It was terrifying and traumatic, but, unlike the experiences of most other survivors, mine was a one-time event.

It caused immediate dysfunction in our family, with my mother telling me to hide the matter from my father. It was an early lesson that I was not believed when I told the truth, or that my story simply wasn't important in the minds of our local pastor and bishop.

Years later, I found myself especially empathetic with other survivors, most of whom seemed to have suffered greater trauma than I had.

I shared my story years ago with Barbara Blaine at the Survivors Network of those Abused by Priests. She has always honored my privacy as I have honored the privacy of others. Rightly or wrongly, I've reasoned that going public about my own abuse could color the perception of our coverage. As history shows, the abuse story was compelling on its own. Once we began to report the scandal, survivors came to us repeatedly, begging us to tell their stories. It seemed they had nowhere else to go.

Our detailed reports, often taken from public court records, failed to move the Catholic hierarchy. At first, convincing the public that clergy sex abuse was widespread in our church was a high wall to get over. And for us to accuse bishops of aiding and abetting, that was yet another unbelievable step to take for many.

As I write this, NCR is in its 50th anniversary year. During these past five decades, I think it is fair to say, no other story has driven us as much as has the clergy sex abuse scandal. There were times when we felt obliged to run a half dozen to a dozen such stories in a single issue.

I believe our reporting record exemplifies quality journalism and fidelity to the mission of our church. We took no delight in our consistent reporting. More than once, we tried to declare a short moratorium on reporting clergy sex abuse. Just as often, we realized we could not. Invariably, a new story would come up, indicating some new aspect of the larger horror story, one that demanded our reporting and further editorial comment.

I've always believed good journalism should aim to give voices to the voiceless and to hold authority accountable. I think NCR's clergy sex abuse coverage fits within these parameters. It's not the story I came to NCR to report, but I can leave one day proud to have worked with editors and reporters who understand good journalism and who continually try to uphold its highest professional standards.

[Tom Fox, NCR publisher, began working for NCR as editor in 1980. His email is tfox@ncronline.org. A version of this essay appears as an epilogue in a recently published biography, titled Whistle: Tom Doyle's Steadfast Witness for Victims of Clerical Sexual Abuse, written by Robert Blair Kaiser and now available at Amazon and Kindle.]

A version of this story appeared in the July 3-16, 2015 print issue under the headline: A first step in bringing secrets to light.