Poll: Phoenix Catholics side with hospital 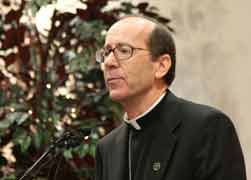 Catholics in the Phoenix diocese overwhelmingly side with St. Joseph's Hospital and Medical Center and Mercy Sr. Margaret Mary McBride in their handling of a case involving a severely ill pregnant woman, according to a recent survey.

Of the 651 Catholics in the diocese who were polled, 72 percent said that when they first heard of the case, they favored the action recommended by McBride; 13 percent favored the action taken by Bishop Thomas Olmsted, who declared that McBride had excommunicated herself; and 16 percent didn't know whom they favored. McBride was a member of the hospital ethics committee that recommended that the pregnancy be terminated in order to save the life of the mother.

According to the hospital, the fetus was dying as a result of the mother's illness, and the mother would have died had the action not been taken.

Olmsted said the hospital had engaged in a direct abortion when the procedure was performed in November 2009. The case attracted national and international attention when the bishop declared in May 2010 that McBride had been automatically excommunicated for her consent to an abortion and then in December when he announced that thehospital could no longer call itself Catholic.

View a graphic that accompanies this story: Graphic.

St. Joseph's maintained that because the mother suffered from pulmonary hypertension, a condition made worse by the pregnancy, the chance of survival for both the woman and the fetus was approaching zero. "Consistent with our values of dignity and justice, if we are presented with a situation in which a pregnancy threatens a woman's life, our first priority is to save both patients. If that is not possible we will always save the life we can save, and that is what we did in this case," hospital president Linda Hunt said in a statement.

According to the survey, the bishop's pronouncement not only failed to persuade Catholics that the procedure was morally wrong, it also had little effect on Catholics' perception of the nature of the hospital. Seventy-seven percent of those polled said they believed that St. Joseph's is still a Catholic hospital; 12 percent said they didn't think it was a Catholic hospital any longer; and 11 percent said they didn't know.

The survey, conducted April 18-26, was designed by William D'Antonio, fellow at the Institute for Policy Research & Catholic Studies at The Catholic University of America in Washington. The telephone poll was managed by the Knowledge Networks Field Department. Knowledge Networks is a survey organization that maintains a vast pool of people representative of the U.S. population, and of a wide range of characteristics within that population, who have previously agreed to be surveyed. The poll has a margin of error of plus or minus 2.5 percent.

Only 14 percent thought that Olmsted's action enhanced the credibility of the U.S. bishops as a group; 37 percent believed it diminished their credibility; 36 percent saw it as a local event with no national consequences; and 14 percent didn't know.

Asked what they consider the most important role of a bishop, 30 percent chose "To encourage programs that feed the hungry and shelter the homeless"; 22 percent chose "To collaborate with lay people to resolve difficult issues"; 21 percent chose "To make sure church laws are followed"; 10 percent selected "To lead by example by avoiding expensive homes, cars and clothes"; 9 percent said "To enforce Catholic identity for Catholic institutions like hospitals and schools"; and 7 percent didn't know.

The results strongly favored McBride even when broken down by gender, ethnicity, and Mass attendance. Among women, 74 percent favored McBride; 12 percent, Olmsted. Men favored McBride over Olmsted 68 percent to 14 percent. Of those surveyed, about 60 percent were female, 40 percent male.

Of the total sample, approximately 35 percent were Hispanic. Among Hispanics, 65 percent sided with McBride; 12 percent with Olmsted, while non-Hispanics favored McBride 74 percent to 13 percent.