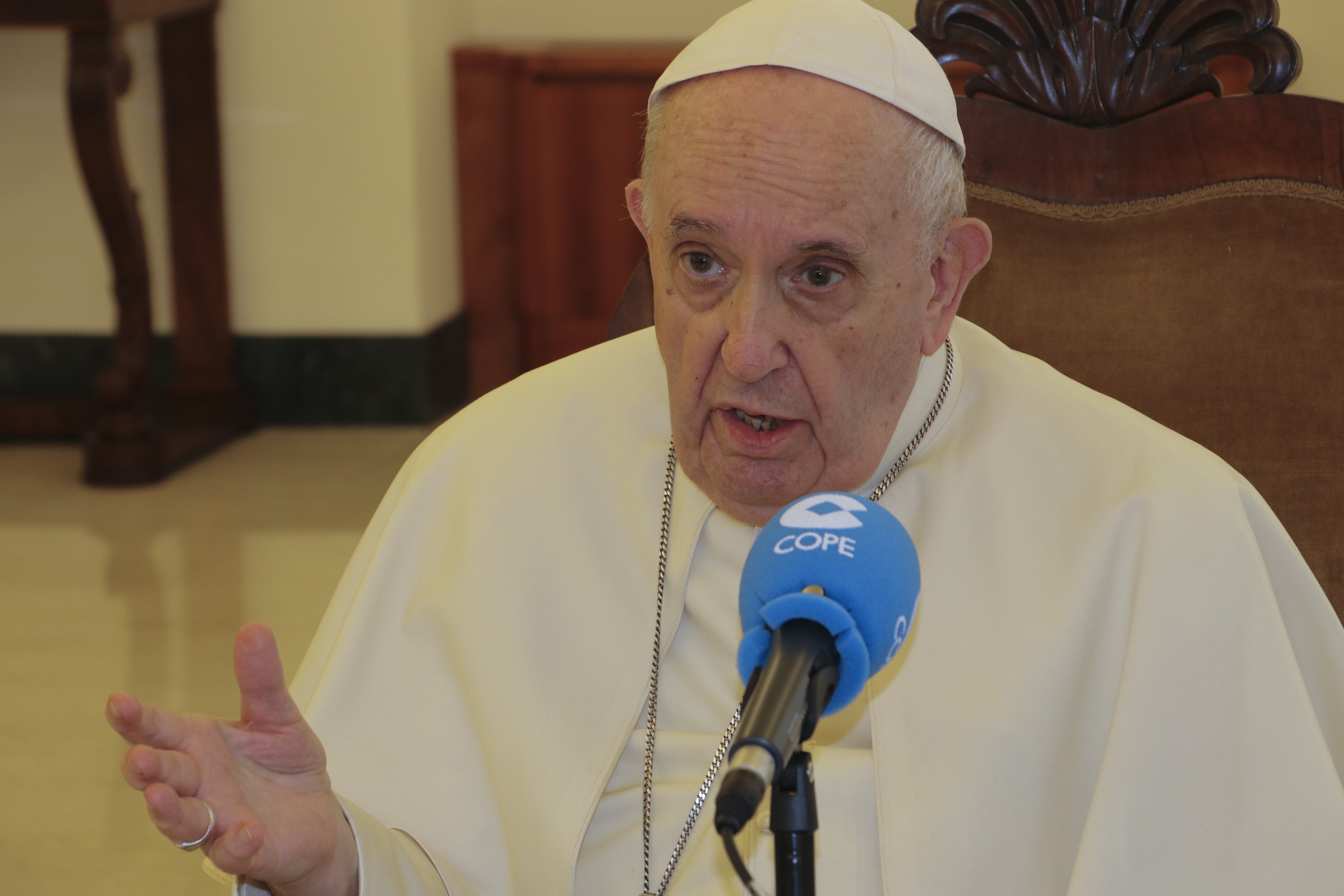 Pope Francis speaks during an interview with Carlos Herrera of COPE, the radio network owned by the Spanish bishops' conference, at the Vatican in late August. In a 90-minute interview, the pope addressed the situation in Afghanistan, the legalization of euthanasia in Spain, and the question of Catalan independence. He also spoke about his own health. (CNS photo/courtesy COPE)

While financial reforms in the Vatican are progressing steadily, cases involving corruption and malfeasance in the Eternal City are "a disease that we relapse into," Pope Francis said.

In a wide-ranging interview broadcast Sept. 1 by COPE, the Spanish radio station owned by the Spanish bishops' conference, Pope Francis said changes made in the Vatican's financial laws have allowed prosecutors to "become more independent" in their investigations.

"Let's hope that these steps we are taking ... will help to make these events happen less and less," he said.

During the interview, the pope was asked about the Vatican trial against 10 individuals and entities, including Cardinal Angelo Becciu, former prefect of the Congregation for Saints' Causes, on charges ranging from embezzlement to money laundering and abuse of office.

The charges stemmed from a Vatican investigation into how the Secretariat of State used $200 million to finance a property development project in London's posh Chelsea district and incurred millions of dollars in debt. At the time, then-Archbishop Becciu served as "sostituto," the No. 3 position in the Vatican Secretariat of State.

Cardinal Becciu was forced to offer his resignation to the pope in September 2020, after he was accused of embezzling an estimated 100,000 euros of Vatican funds and redirecting them to Spes, a Caritas organization run by his brother, Tonino Becciu, in his home Diocese of Ozieri, Sardinia.

The pope told COPE he authorized the Vatican's investigation into the property deal as a sign that he was "not afraid of transparency or the truth."

"Sometimes it hurts a lot, but the truth is what sets us free," he said.

Regarding Cardinal Becciu, the pope said he hopes "with all my heart that he is innocent," adding that the Italian prelate was "a collaborator of mine and helped me a lot."

Cardinal Becciu is someone "whom I have a certain esteem for as a person, that is to say, my wish is that he turns out well," he said. "In addition to the presumption of innocence, I want everything to turn out well. In any case, justice will decide."

When asked by COPE about the Catholic Church's efforts to fight against clergy sexual abuse, Pope Francis praised the efforts made by Cardinal Sean P. O'Malley of Boston, president of the Pontifical Commission for the Protection of Minors.

Cardinal O'Malley, he said, was among those who spoke about the sexual abuse crisis "with courage," especially when "it fell to him to settle the matter in Boston, and it was not easy."

"The Commission for the Protection of Minors, which was Cardinal O'Malley's invention, is now functioning," he said.

The pope said sexual abuse is "a serious, global problem," and he criticized governments that have failed to stop the production of child pornography, which he called "demonic."

"I sometimes wonder how certain governments allow the production of child pornography," he said. "They cannot say they do not know. Nowadays, with the intelligence services, everything is known. A government knows who in their country produces child pornography. For me, this is one of the most monstrous things I have ever seen."

Pope Francis also said he is reviewing the proposed apostolic constitution for reforming and governing the Roman Curia.

The document, "Praedicate Evangelium" ("Preach the Gospel") — which will replace "Pastor Bonus," St. John Paul II's 1988 constitution reforming the Curia — "is nearly finished" and there are only a few things that require "tweaking," he said.

The pope added that his read-through of the apostolic constitution was delayed due to his surgery in July.

"The last step is for me to read it — and I must read it because I have to sign it, and I have to read it word for word — and it is not going to have anything new in terms of what is being seen now," he said.

The proposed merging of dicasteries in the document have either happened or have already been announced, he said.

Pope Francis was asked about the Vatican's renewal of an agreement with the Chinese government regarding the appointment of bishops.

The 2018 provisional agreement, the text of which has never been made public, outlines procedures for ensuring Catholic bishops are elected by the Catholic community in China and approved by the pope before their ordinations and installations, according to news reports at the time.

Among the harshest critics of the Vatican’s agreement with China was the U.S. Trump administration, including former U.S. Secretary of State Mike Pompeo. Prior to the agreement's renewal, Pompeo tweeted that "the Vatican endangers its moral authority, should it renew the deal."

The pope said that like many who criticize his decisions regarding China, "when I was a layman and priest, I loved to show the bishop the way" to do things.

Nevertheless, he said, the Vatican "should not give up on dialogue," and "closed-mindedness is never the way."

"What has been achieved so far in China was at least dialogue, some concrete things like the appointment of new bishops, slowly," the pope said. "But these are also steps that may be questionable and" with varying results.