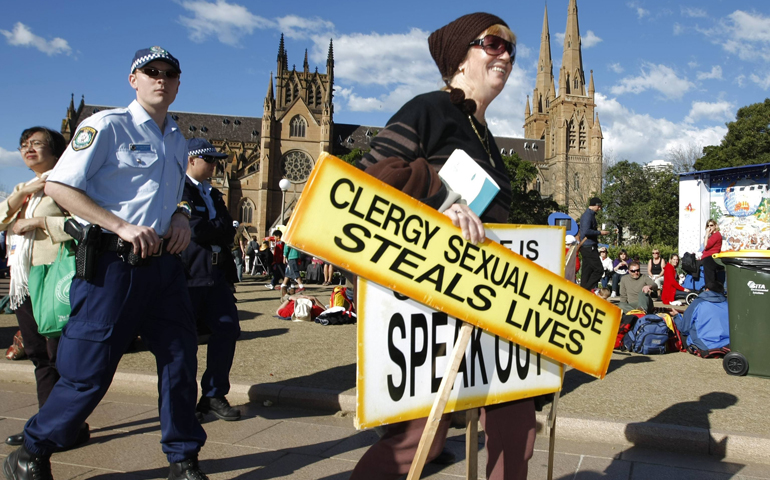 Police officers escort a woman protesting against clergy sexual abuse away from St. Mary's Cathedral in Sydney, Australia, where Pope Benedict XVI was meeting with religious leaders on July 18, 2008. The pope was in Australia for World Youth Day. (CNS/Reuters/Tim Wimborne)

And every week he examined the grueling cases -- coming chiefly from the United States.

"He used to call that weekly meeting ... his penance," said Greg Erlandson, co-author of Pope Benedict XVI and the Sexual Abuse Crisis: Working for Reform and Renewal. Erlandson and church historian Matthew Bunson say in their book that Pope Benedict XVI "arguably was probably the most knowledgeable man on the abuse crisis."

As cases of sexual abuse continued to make headlines, the man who became Pope Benedict XVI has at times publicly addressed the issue and even met with victims, beginning with five victims from the Boston archdiocese, where the abuse scandal first made global headlines.

But victims' advocates remain skeptical and critical over his handling of the matter, particularly the failure to punish bishops who protected abusers rather than children and teens.

"When forced to, he talks about the crimes but ignores the cover-ups, uses the past tense as if to suggest it's not still happening," said David Clohessy, the executive director of the Survivors Network of Those Abused by Priests. "He has vast powers and he's done very little to make a difference."

According to the U.S. Conference of Catholic Bishops' Office of Child and Youth Protection and independent studies commissioned by the bishops, in the United States, there have been:

His meetings with victims are viewed by some as "merely public relations."

"These gestures were cynical and, in a way cruel, because they gave survivors and Catholics the illusion that he was a reformer," said Anne Barrett Doyle, co-director of the watchdog group BishopAccountability.org.

Terence McKiernan, president of BishopAccountability.org, said he believes Benedict and others involved in allegedly covering up the scandal did not allow the survivors to truly affect them. He said he believes the meetings were too highly controlled to really break down any emotional walls.

"Anyone who has worked with survivors feels that those relationships are a privilege and that they do change your life," McKiernan said. "The brief encounters the pope has had with survivors hasn't been life-changing because he's continued to function the way he has."

While Erlandson acknowledges that the visits weren't able to undo victims' emotional damage, he says the meetings were a step forward for the Vatican.

Visiting victims "is a powerful experience of humility, and in that sense, also, he was modeling for the rest of the church and for church leaders how they should behave, and so I think that was powerful," Erlandson said.

Greater transparency by publishing lists of predator priests would help the Vatican move past "just lip service," said Kevin Waldrip, a victim of predatory priest sexual abuse and volunteer for Road to Recovery, an organization that helps victims of clergy sexual abuse.

"I wanted to become a priest, and that changed in a day," Waldrip said, referencing his abuse the day before his 13th birthday. "I felt that not only had I been violated by this priest that I knew and loved, but I had been violated by God."

In the United States, 30 bishops have released the names of predator priests on their diocesan websites. Victims' advocates continue to call for the Vatican to follow suit by releasing files and documentation of clergy sexual abuse. Doing so could allow victims to heal and gain closure, said Mitchell Garabedian, a Boston lawyer who has represented sexual abuse victims of more than 40 different priests.

Doyle said she believes the church's inability for action has only further suppressed actions to stop sexual abuse. In September, Bishop Robert Finn of Kansas City, Mo., was found guilty of failing to tell authorities about a priest suspected of sexually exploiting children. Finn was the first U.S. bishop convicted of protecting a priest in a sexual abuse case. Finn remains in office.

For decades, it was standard procedure for church officials to keep abuse secret. Those years are explored in disturbing and dramatic detail in a new HBO documentary, "Mea Maxima Culpa: Silence in the House of God," which went into broadcast rotation on the cable network a week ago.

It is directed by Oscar winner Alex Gibney and voiced by Hollywood stars including Bradley Cooper and Ethan Hawke. Also named in the credits is one of the narrators, prize-winning New York Times religion reporter Laurie Goodstein, whose coverage of rampant abuse of deaf children at a school in Wisconsin became an international sensation.

The unifying claim of the documentary is that the Catholic church, from the papacy to the smallest parish, has been focused on protecting the institution, not the youth.

In the documentary -- as in California this month where retired Cardinal Roger Mahony was rebuked by the current archbishop of Los Angeles -- only court-ordered releases of documents have enabled victims to trace what the church knew and when people with the power to call the police, defrock priests or reach out to victims, failed to act.

Almost every example in the film traces eventually to the Congregation for the Doctrine of the Faith and Ratzinger. The Vatican did not respond to the filmmakers' requests for interviews.