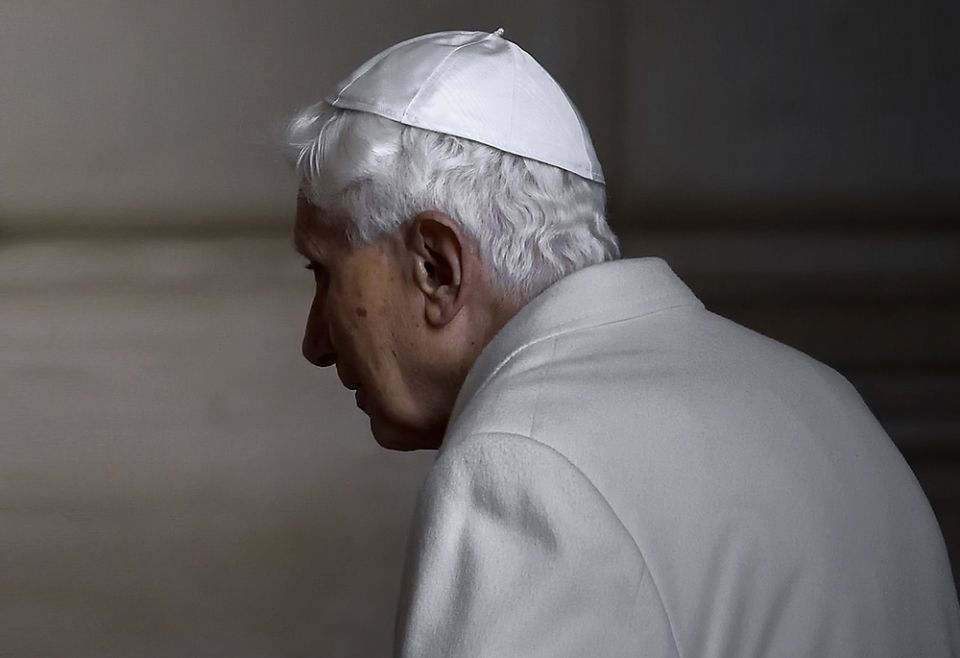 Pope Benedict XVI attends the opening of the Holy Door to inaugurate the Jubilee Year of Mercy, in St. Peter's Basilica at the Vatican in this Dec. 8, 2015, file photo. The retired pope released a statement Feb. 8 concerning the recent report on abuse in the Archdiocese of Munich and Freising, where he served as archbishop from 1977-1982. (CNS/Stefano Spaziani, pool)

Rome — German survivors of clergy sexual abuse are sharply criticizing retired Pope Benedict XVI's response to a report that faulted his handling of four abuse cases in the 1970s and '80s, calling his lack of a direct apology an abdication of personal responsibility.

"The one thing everybody expects from him is to say, 'I made a mistake. I'm sorry. I should have acted differently back then. And I'm sorry,' " said survivor Doris Reisinger.

Reisinger, a German theologian who left religious life after alleging abuse by a priest in her community, said that Benedict's two-page Feb. 8 letter responding to accusations that he mishandled four cases of abuse during his time as Archbishop of Munich and Freising, was an "embarrassment."

"It's such a very public demonstration of how this institution has not really even begun to understand what they did to us," she told NCR.

The letter, which was accompanied by a three–page rebuttal to the Munich report's findings, represents what Reisinger described as a "deflection of personal responsibility."

Benedict, the former Cardinal Joseph Ratzinger, headed the German archdiocese from 1977 to 1982 before being appointed as head of the Vatican's Congregation for the Doctrine of the Faith, and then being elected pope in 2005.

The independent report, prepared by a law firm at the archdiocese's request, was tasked with looking into abuse between 1945 and 2019 and whether church officials handled allegations correctly. The report authors concluded that in four cases during Benedict's tenure in Munich involving misbehaving priests, the future pope "can be accused of misconduct."

In his Feb. 8 personal letter, the former pope thanked a "small group of friends" that helped him prepare his response to the report. Reisinger criticized these advisers, saying she found it perplexing that they did not help the retired pope avoid a response that abuse survivors find "appalling."

Survivor Matthias Katsch echoed that concern, saying he felt that Benedict's response was professionally curated and focused on his insistence that "he did not make juridical mistakes."

"He's acting like he is a defendant in court," Katsch told NCR.

While he acknowledged the desire to defend one's own reputation, Katsch said he was puzzled by the letter's legal focus and the tone of the response, since "this is not a trial," but rather allegedly a personal response.

Katsch, who has become a leading German activist in the fight against abuse following his own alleged abuse as a teenager in Germany while attending a Jesuit school, observed that in the most notorious case in which Benedict was faulted, the abusive priest who was allowed into the Munich Archdiocese under the future pope's watch was allegedly allowed to go on abusing minors for another 20 years before being removed from ministry.

In Germany and beyond, survivor advocacy networks and church reform movements denounced Benedict for addressing the abuse crisis in broad strokes and generalities, rather than engaging in the particulars.

"Ratzinger still sees himself as a victim who has been 'drawn into excessive guilt,' " said the German church reform organization We Are Church in a statement. "He is still unwilling to stand by the non-delegable overall responsibility that a bishop has."

The Survivors Network of those Abused by Priests, known as SNAP, said that while the pope acknowledged institutional failures under his watch, his remorse was "faint."

"To us, Benedict's letter is admitting to one thing to cover up a thousand. It is the same pattern of abuse, institutional knowledge, and concealment," they wrote.

In Munich's major newspaper, Süddeutsche Zeitung, historian Joachim Käppner said Benedict's letter represented an "alienation" from the realities of survivors and most lay Catholics, and was another symptom of church leaders seeking to protect the institution at any cost.

The retired pope's longtime personal secretary, Archbishop Georg Gänswein, has pushed back against these criticisms, telling Italy's leading paper, Corriere della Sera, "As he wrote it, he thought about the victims of abuse."

German Jesuit Fr. Hans Zollner, in an interview with Italy's La Repubblica, said that what counted most was how abuse survivors received the letter.

"I am not the judge of the pope emeritus," Zollner told the paper, "but it is striking that he thanked his friends first and only after the victims."

Zollner, one of Catholic Church's leading experts on abuse, described Benedict's response as primarily theological in nature, and one in which the retired pope did not take any personal responsibility.

Boston's Cardinal Sean O'Malley, president of the Pontifical Commission for the Protection of Minors, said in a statement that the letter represented Benedict's "awareness that moments of darkness and sinfulness have cruelly scarred survivors of child sexual abuse."

"Pope Emeritus Benedict offers his own contrition for what has been lacking in his stewardship," O'Malley continued. "His witness and profound honesty should galvanize all of us to defend survivors of abuse and to protect all those entrusted to our care."

Meanwhile, Bill Donohue, president of the Catholic League for Religious and Civil Rights, offered a more blunt assessment of the letter, saying it was "refreshing" that Benedict XVI did not offer a direct apology for the cases in Munich.

"Pope Benedict has nothing to apologize for," he continued. "If anything, it is his vicious critics who owe him an apology."

The German survivors of abuse, however, beg to differ.

"It's really quite simple," said Katsch of what he would have liked to hear from the retired pope. "I am so sorry I did not do everything in my power to protect these kids at the time. And I will do what I can do now to help other survivors to live on with this burden."

Editorial: It's past time for Vatican report on McCarrick's shameful rise