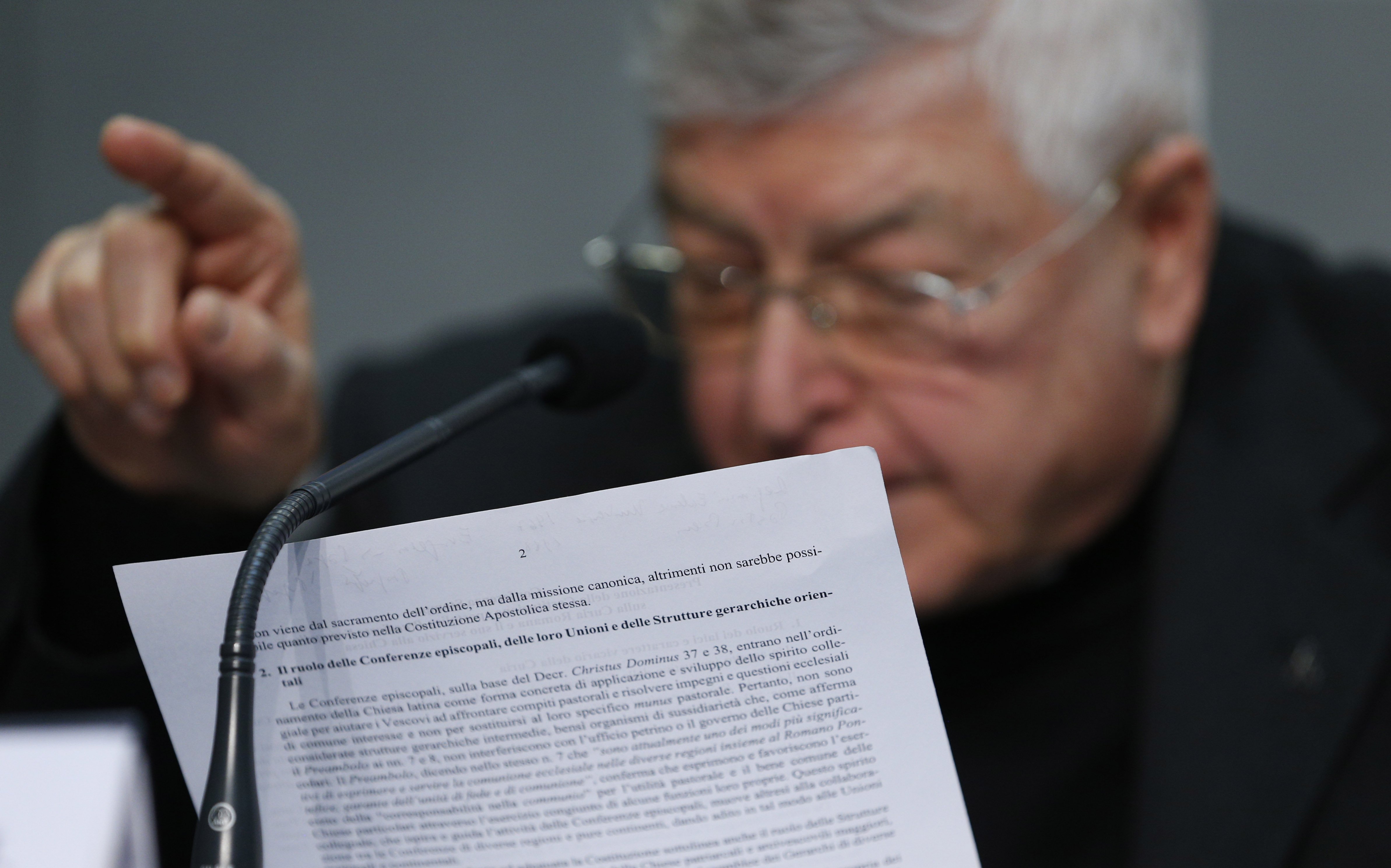 Jesuit Father Gianfranco Ghirlanda, a canon lawyer and former rector of Rome's Pontifical Gregorian University, speaks at a news conference to present Pope Francis' document, "Praedicate Evangelium" ("Preach the Gospel"), for the reform of the Roman Curia, during a news conference at the Vatican March 21, 2022. (CNS photo/Paul Haring)

It takes nine months for a woman to produce a baby. It took nine years for the Vatican to birth a new document reforming the Roman Curia.

Perhaps the Vatican would act more quickly if there were more women working there.

It consolidates several offices, opens major roles to laity and urges greater decentralization. "The Roman Curia," the document states, "does not stand between the pope and the bishops, but rather places itself at the service of both in ways that are proper to the nature of each."

The Vatican bureaucracy has always had a reputation for moving at a glacial pace because of bureaucratic inertia and a general opposition to change. Every Vatican bureaucrat has traditionally opposed reform, or any reduction in his responsibilities and power, citing his familiarity with the issues and the likelihood that change will cause catastrophic problems.

Curial reform is also slow because the Vatican still foolishly thinks that its organizational plan should be permanent, written in stone for the ages, rather than written in pencil so that it can be modified whenever necessary.

On the contrary, Curia reform should be seen as an incremental process that happens frequently, not a revolutionary event that happens rarely.

In fact, incremental changes have been introduced in the Curia since "Pastor Bonus" in 1988, occasioned by financial and clerical sex abuse scandals. The Congregation for Doctrine of the Faith took on the horrendous task of dealing with the latter, while Pope Benedict XVI agreed to align the Vatican bank with Moneyval's anti-money laundering rules and the Supervisory and Financial Information Authority (ASIF) was created to prevent and counter money laundering.

A new Secretariat for the Economy was also created in 2010 to supervise Vatican finances and strengthen under Pope Francis, who also ordered the Secretariat of State to give up control of its investments to APSA, the Vatican's sovereign wealth manager, two years ago.

More mergers are in the latest reform, for instance, the merging of the Council for Promoting the New Evangelization with the Congregation for Evangelization of Peoples. Francis symbolically shows the importance of this combined entity by heading it himself.

One office in the new entity will continue the congregation's traditional focus on missionary territories through supervision, financial support and the appointment of bishops. But Francis wants the other office to promote evangelization throughout the world, since many traditionally Catholic countries have lost membership to the point where they look like missionary territories.

The office is to reflect on "the history of evangelization and mission, especially in their relations with the political, social and cultural events that have marked and conditioned the preaching of the Gospel." It will also help local churches in the "process of inculturating the Good News of Jesus Christ in different cultures and ethnic groups, and helping their evangelization, with particular attention to expressions of popular piety."

I doubt that the missions of these two offices, one administrative and the other creative, will fit easily together. But if the creative office can tap into the money traditionally controlled by the old congregation, it might be able to do something.

The new document also places the Pontifical Commission for the Protection of Minors within the Congregation for Doctrine of the Faith, which deals with abusive clergy. Some survivors and their supporters fear this will muzzle the commission, but others think its placement will give it more responsibility and power.

It's not uncommon for governments and organizations to create new offices that are later merged with older departments. New entities are created to respond to issues about which a leader has special concern. As time goes on and leaders change, the need for the independent agency is questioned. That is what is happening in the Vatican.

On the other hand, the creation of the new Dicastery for the Service of Charity reflects Francis' concern for the poor.

The most visible change is that Vatican offices will no longer be called congregations or councils but will be called "dicasteries," a word going back to the ancient Greeks. The unwillingness of the Vatican to use modern terminology, like "department" or "office," reflects its insistence that the Vatican is unique and cannot learn from modern organizations.

In theory, all the dicasteries will be equal, but as in the novel "Animal Farm," some will be more equal than others. The Vatican is still a royal court where whoever has the ear of the pope will rise to the top. Under Paul VI, the Secretariat of State took charge of coordinating offices, and it still holds sway today. Under John Paul, the Congregation for the Doctrine of the Faith was the top dog when it came to documents. Today, Francis favors the dicasteries for evangelization and human development.

Potentially the biggest change in "Praedicate Evangelium" is its opening of top positions in the Vatican to laypeople. This could have monumental impact if truly implemented. Theoretically, the secretary of state, the highest official after the pope, could be a laywoman. A woman theologian could be prefect of the Dicastery for Doctrine of the Faith. This will upset those who believe that only the ordained can exercise the power of governance in the church.

There are other problems, however, in employing laity in the Vatican.

Having laypeople in top jobs will not magically change the church for the better. Laypeople bring their own values and baggage to their jobs. As parishioners know, lay ministers can be just as clerical and authoritarian as priests.

The second issue is money. How is the Vatican going to pay for qualified lay specialists and executives?

I once complimented a journalist by telling him that if I were pope, I would put him in charge of the press office. He laughed and said, "They can't afford me."

While low-level Vatican employees are well compensated, the church cannot compete with top salaries outside the Vatican, especially in areas like finance. Even theologians can get better pay at a university. Priests and members of religious orders are simply cheaper than lay employees. If the Vatican is unwilling to pay competitive salaries, the quality of its staff will continue to suffer.

Underlying all of these changes are the values Francis has been preaching since the beginning of his papacy: his desire for a more inclusive and listening church that is missionary in outlook.

Francis wants a Curia that listens to and serves the whole church in its mission of evangelization and service to the poor. He believes that authority should be more decentralized in the church, which means that bishops' conferences should be taken seriously. If these values become inculturated in the Curia, then his reform will be a success.

"Praedicate Evangelium" is a step forward, then, but much remains to be done. The Vatican needs a department of justice to investigate financial crimes and crimes against persons. It needs a clearer separation of legislative, executive and judicial powers. It needs clearer procedures for consultation and transparency.

Francis has tried to reform the culture and organization of the Vatican, but like the church, it should be "semper reformanda" — always reforming.