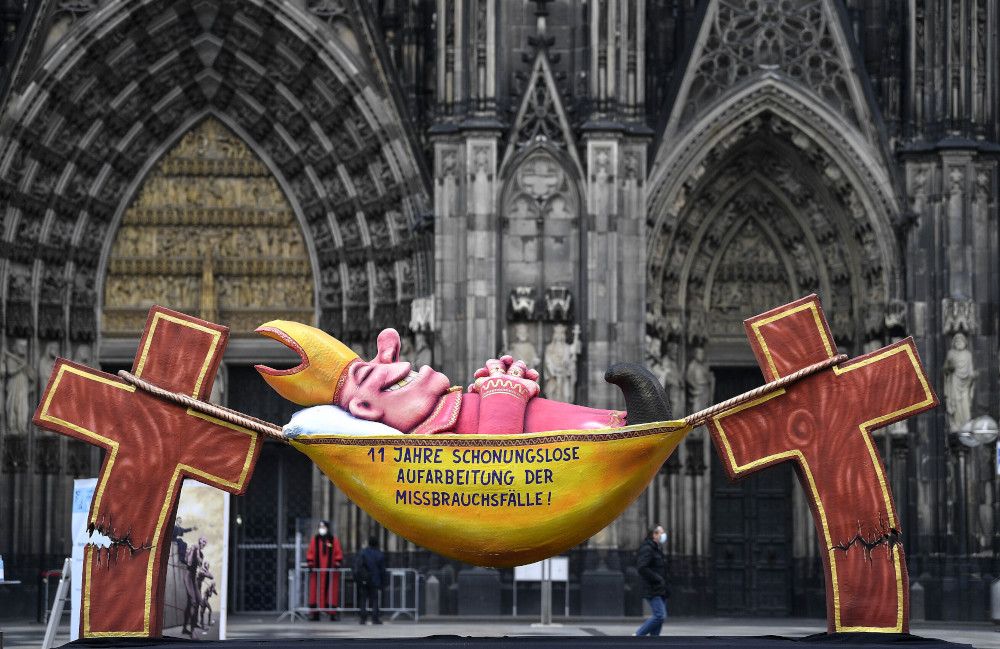 In this March 18, 2021 file photo, a carnival float depicting a sleeping Cardinal, reading '11 years of relentless processing of cases of abuse' is set in front of the Cologne Cathedral to protest against the Catholic Church in Cologne, Germany. Pope Francis has rejected the resignation of the archbishop of Hamburg Stefan Hesse, who offered to step down in March after he was faulted for his handling of sexual abuse in his previous diocese. (AP Photo/Martin Meissner, File)

Pope Francis has rejected the resignation of the archbishop of Hamburg, who offered to step down in March after a report faulted him for his handling of sexual abuse allegations in his previous diocese.

The papal nuncio's office in Berlin said in a statement Sept. 15 that the pontiff made his decision after two envoys traveled to Cologne in June to look into possible mistakes by senior church officials there in handling past sexual abuse cases. Stefan Hesse, Hamburg's archbishop since 2015, previously served in several senior roles in the Cologne archdiocese.

Hesse's resignation offer followed the release of a reportcommissioned by his counterpart in Cologne which found 75 cases in which high-ranking officials neglected their duties in such cases. They were criticized, for example, for failing to follow up on or report cases of abuse, not sanctioning perpetrators or not caring for victims.

Hesse was faulted for 11 cases of neglecting his duty. At the end of March, Francis granted him a "time out" of unspecified length.

The nuncio's office said that the Vatican found "personal procedural errors" on Hesse's part but an investigation didn't show that they were committed with the intention of covering up cases of sexual abuse.

"The fundamental problem consisted, in the wider context of the administration of the archdiocese, in the lack of attentiveness and sensitivity toward those affected by abuse," it added.

The statement said Francis rejected Hesse's resignation and asked him to stay on in view of "the fact that the archbishop recognizes with humility the mistakes he made in the past" and had offered to quit.

Hesse conceded in March that he had made "mistakes" in the past, and said he very much regretted if he caused new suffering to victims or their relatives "through my action or omission."

"I never participated in cover-ups," he said. "I am nevertheless prepared to carry my part of the responsibility for the failure of the system."

In a statement Wednesday addressed to Catholics in his archdiocese, Hesse acknowledged that "it won't necessarily be easy to resume my service."

"I will do everything in my power to do justice to this challenge," he wrote. "There will have to be a new beginning.”

Hesse said it was important for him to reach out to "those are perplexed by the pope's decision, question it and/or struggle with it."

Revelations about past sexual abuse have dogged the church in Germany and elsewhere for years.

The archbishop of Cologne, Cardinal Rainer Maria Woelki, was cleared of wrongdoing by the report that faulted Hesse, but remains under pressure for his handling of the issue. He has refused to step aside.

In June, Francis swiftly rejected an offer from Cardinal Reinhard Marx, one of Germany's most prominent clerics and a close adviser of the pope, to resign as archbishop of Munich and Freising over the church's mishandling of abuse cases. But he said a process of reform was necessary and that every bishop must take responsibility for the "catastrophe" of the crisis.

Marx himself hasn't been implicated in any reports on abuse so far, but he said all members of the hierarchy shared blame for the failures.