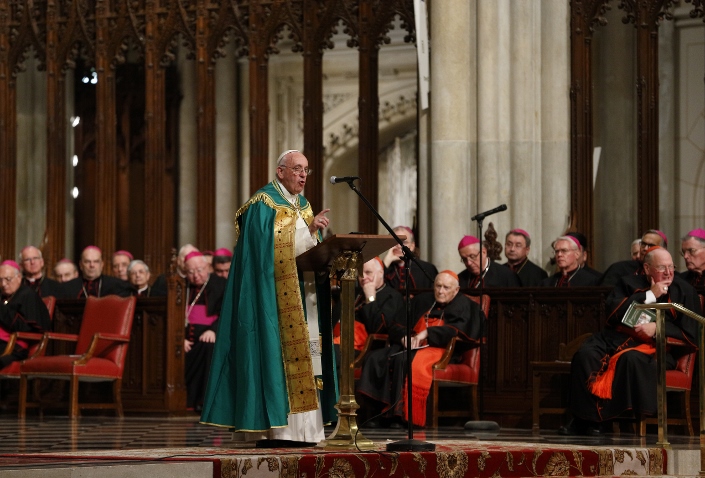 Let's face it. We all are sick unto death of the sexual abuse crisis in the Catholic church. Why can’t we let good Pope Francis have his U.S. visit and just focus on all the incredibly moving moments of compassion, mercy, humility and great importance? Climate change, immigration, capitalism, the poor, the homeless, the imprisoned -- for Peter’s sake, John Boehner resigned the day after meeting the pope, apparently deciding his soul was more valuable than his power. So, Francis wasn't perfect when it came to sexual abuse -- he came through in the 59th minute of the 11th hour of his visit, yes?

I get it. I get the deep desire to love this pope unconditionally and just for once in the 14 years since the sexual abuse scandal exploded to stop making such a colossal big deal of the whole topic. I mean, it isn’t even a crisis anymore, right?

But, let’s shrug off the "Francis effect" for a just a minute. Let’s look at the pope's visit from two perspectives — the victims’ and the factual. Let’s give credit where credit is due and hold his feet to the flames of accountability for the great pain he dished out to victims and for the fury he evoked in advocates.

At The Cathedral of St. Matthew the Apostle in Washington, D.C., with over three hundred bishops as a captive audience, Pope Francis blew it. Not a word about shame, the need for the bishops to carry a mantle of repentance for their and/or their predecessors' collusion in enabling abuse and protecting abusers. Not a whisper of the kind of stern admonishments he issued about ecclesiastical materialism, greed, and power mongering. Nope. Not one single word.

Remarkably, the bishops once again were cast as what sounded to survivor ears as the real -- or at least the equal -- victims of the sexual abuse crisis. Francis said, "I am also conscious of the courage with which you have faced difficult moments in the recent history of the Church in this country without fear of self-criticism and at the cost of mortification and great sacrifice. … I realize how much the pain of recent years has weighed upon you and I have supported your generous commitment to bring healing to victims -- in the knowledge that in healing we too are healed -- and to work to ensure that such crimes will never be repeated."

There are very few survivors or advocates in this country who could be anything less than astonished and distraught at the marriage of "courage" and "bishop" as related to sexual abuse. As for generous commitments to bring healing to victims, many of the men present still are authorizing defense lawyers to do everything possible not to offer victims anything tangible. Cardinal Timothy Dolan tried to defer 55 million dollars of Archdiocese of Milwaukee money into a cemetery fund to protect it from victim lawsuits, a move later struck down by the courts. Cardinal Roger Mahony, also in attendance, was relieved of public duties because of his approach to sexual abuse in the Archdiocese of Los Angeles. Generous healing? I think not.

At the same time, Francis urged the bishops to get out of their chanceries, to "encounter" the people, never to avoid dialogue. Who among the people of God should be first to experience pastoral encounters and dialogue, even painful, aggressive dialogue? Surely the answer should have been survivors and their families. Survivors are among the homeless, the poor, the imprisoned, the mentally ill, and the dead, in a substantial numbers of cases because of the abuse and neglect -- the violence -- visited upon them by priests and bishops and popes. They do not have to be the only ones encountered, and it certainly would do the church good to have the bishops get out in the street to meet and dialogue with all kinds of people. But, the least should be first, and the church's own injured should qualify as such.

Let me get personal. I was driving back to my office from lunch, listening to the radio and eagerly waiting to hear what the pope would say to his brother bishops at St. Matthew's. When I heard him laud the bishops' courage in facing the sexual abuse scandal they enabled for decades, I burst into tears as I imagined the literally breath-stopping pain rippling through sexual abuse survivors throughout this country. Once again, survivors were punched in the soul-ar plexus by a Catholic pope who discounted their suffering to hold up the supposed suffering of the bishops. It was unimaginable and so very painful.

New York was next. At St. Patrick's Cathedral, now home to Timothy Dolan, Francis again turned his great capacity for empathy towards his priests, praising their constancy in having "suffered greatly in the not distant past by having to bear the shame of some of your brothers who harmed and scandalized the Church in the most vulnerable of her members."

There is truth to this. Many good and decent priests have carried the mantle of public skepticism and devaluation earned by the actions of their brother clergy. At the same time, many of these men knew what perpetrating priests were doing. Some who spoke were punished more harshly than the criminals among them. The opportunity Francis missed here was to remind clergy of the obligation to report any known child abuse to civilian authorities and to instruct them forcefully to do so on pain of his displeasure.

If Boston was the Ground Zero of the sexual abuse crisis, Philadelphia was in some ways Boston on steroids. Two grand jury reports castigated Cardinal Bevilacqua and Cardinal Rigali for their roles in covering up sexual abuse, yet Rigali got to hang out with Francis during the Philly visit. New York Times reporter Laurie Goodstein points out that on the same day Francis arrived in Philadelphia, a Pennsylvania priest was convicted of sexually abusing boys at an orphanage in Honduras, illegally transferring thousands of dollars to fund his activities, and possessing child porn. Many legal cases still pend in Philly and are aggressively defended by the church's lawyers. The sexual abuse crisis is not over in this country, and Philadelphia is still deep in the muck.

Finally, there in Philadelphia, with one foot on the tarmac back to Rome, Francis met with sex abuse survivors. I have no argument with his including non-church victims in the meeting. The fact is that Catholic priest abuse accounts for a very small percentage of all sexual abuse, almost half of it perpetrated by family members. About 6 percent of priests have committed this crime, many more brother priests remained silent about crimes they knew were being perpetrated, and hundred of bishops enabled ongoing sexual abuse then callously ignored or fought victims in courts. The church, therefore, indeed has a responsibility to care pastorally for all sexual abuse victims and to model the highest level of internal integrity in preventing and responding immediately to sexual abuse that occurs by reporting it to civilian authorities.

At St. Charles Borromeo Seminary in Philadelphia, Francis at last suggested that he would hold to account bishops who protect priests who perpetrate sexual abuse: "… I commit to a careful oversight to ensure that youth are protected and that all responsible will be held accountable."

Earlier, he acknowledged to victims that bishops has been derelict in their duty to protect them and had, in some cases, even been perpetrators themselves.

Perhaps the most powerful words Francis spoke to victims -- and the ones almost always denied to them by bishops -- were, "I am deeply sorry for the times when you or your family spoke out, to report the abuse, but you were not heard or believed. Please know that the Holy Father hears you and believes you." Every victim desperately wants to know they are believed and to hear that Francis does may be profoundly important to some victims. That particular act of compassion cannot be discounted and, to me, is deeply moving.

So where does that leave us? One advocate friend of mine has always said that the bishops never miss an opportunity to miss an opportunity when it comes to sexual abuse. Pope Francis is another bishop who missed a bunch of them. In Washington and New York, he scorched the souls of the already soul-scarred with insensitive and dubiously factual praise of men who hurt them. In Philadelphia, Francis threw what many victims subjectively experienced as a Hail Mary pass of balm and renewed promises. "God weeps," said the pope in Philly. As he flies back to Rome, survivors and advocates also weep, wondering which of the mixed messages spoken by Francis will prevail in the end.

I close as I began. Let's face it. It is unlikely that survivors looking to the pope or any other part of the Catholic church for solace will find succor on any kind of consistent basis. The church is not the place to go to heal for most survivors. It is not helpful to the hard work of healing to expect much from the institution. But that does not mean that healing is a hopeless endeavor. I have worked clinically with survivors, including survivors of clergy abuse, for 30 years, and I know to the marrow of my bones that survivors can heal. I have seen it and have been honored to help it along. I have seen miracle occurs in my treatment room and I have felt grace flowing into battered souls. You do not need a pope, or a bishop, or a priest or the Catholic church to heal. The Divine is accessible through many channels. Francis' mixed messages are another blow to you, but you have endured worse.