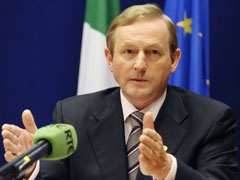 DUBLIN, IRELAND -- After the July 12 revelations of the damning Cloyne Report, which uncovered church failures to report allegations of abuse to the civil authorities as recently as 2008 (NCR, July 22), it would have been hard to imagine the crisis gripping Irish Catholicism getting any worse.

That was until Irish Prime Minister -- the Taoiseach -- Enda Kenny took to his feet in parliament July 20 to address the crisis.

In an attack probably without parallel anywhere else in the world from such a senior figure, Kenny accused the Vatican of adopting a “calculated, withering position” on abuse in the wake of the report that accused the Holy See of being “entirely unhelpful” to Irish bishops trying to deal with abuse.

He said the Cloyne Report “exposes an attempt by the Holy See to frustrate an inquiry in a sovereign, democratic republic as little as three years ago.”

“And in doing so, the Cloyne Report excavates the dysfunction, disconnection, elitism and the narcissism that dominate the culture of the Vatican to this day,” he said. “The rape and torture of children were downplayed or ‘managed’ to uphold instead, the primacy of the institution, its power, standing and ‘reputation.’ ”

What is more startling than Kenny’s speech is the widespread -- near universal --praise it has received, even from some members of the hierarchy. Dublin Archbishop Diarmuid Martin said he was “impressed by the emotion” of Kenny’s speech.

In an interview with Irish broadcaster RTE, Martin urged the Vatican to respond to the Cloyne Report by reiterating its support for the Irish church in applying existing norms on child protection, for full cooperation with civil authorities and for comprehensive audits of child protection procedures in all Irish dioceses.

“Obviously the Vatican defends its position but it doesn’t defend the rape of children,” Martin said.

Yet Martin, who has won widespread praise for his forthright leadership on the issue, also laid bare divisions among members of the Irish hierarchy.

“What sort of a cabal is in there and still refusing to recognize the norms of the church?” he asked.

The Vatican was clearly less impressed by Kenny’s intervention. The Holy See Press Office announced July 25 in a brief communiqué that the papal nuncio to Ireland, Archbishop Giuseppe Leanza, had been recalled to Rome for “consultations” in preparation of an awaited Vatican response to the criticism.

The use of the word “recall” indicates a serious detrition in relations. A week earlier, Irish Foreign Minister Eamon Gilmore had summoned Leanza and demanded an official response from the Vatican on the Cloyne Report.

Vatican deputy spokesman Fr. Ciro Benedettini said July 25 that the recall “denotes the seriousness of the situation and the Holy See’s desire to face it objectively and determinately,” but he also indicated that there was “some degree of surprise and disappointment at certain excessive reactions” to the report and its accusations against the Vatican.

The overwhelmingly positive reaction in Ireland to Kenny’s speech shows just how frustrated Irish Catholics have become with the church. Mass attendance is still high by Western European standards (a recent survey found some 43 percent of Irish Catholics attend Mass weekly), but attendance at Mass certainly does not imply an uncritical approach to the church, especially in the field of child abuse.

Even 10 years ago, such a strident attack on the Holy See by the leader of their government would have outraged Irish Catholics. Now, the prime minister’s office has revealed that it has received thousands of letters of support for Kenny’s comments, including from many priests and religious.

“The numbers of members of the clergy who have been in touch in the last few days, to say it is about time somebody spoke out about these matters ... has astounded me,” Kenny said.

“I haven’t made any other comment except to say that we await the response from the Vatican,” he said.

It’s a remarkable turnaround on Ireland’s traditionally close -- some would say obsequious -- relationship with Rome. In 1948 the newly-elected Prime Minister John A. Costello chose as his first act of governance to transmit a telegram to Pope Pius XII.

“My fellow ministers and I,” he wrote, seek “to repose at the feet of Your Holiness the assurance of our filial loyalty and our devotion to your August Person, as well as our firm resolve to be guided in all our work by the teaching of Christ and to strive for the attainment of social order in Ireland based on Christian principles.”

The historic hand-in-glove relationship between church and state articulated by this telegram is rapidly unraveling as church failings are increasingly revealed.

However, this reaction also has a lot to do with the particular brand of authoritarian Catholicism that has ruled supreme since the Irish state won independence from Britain in 1922.

As the only credible institution in the new state, the church assumed absolute control of schools, hospitals, health clinics and many other public services. In return, a grateful government was willing to defer to the church’s teaching on a range of issues. Divorce, which had been legal under British rule pre-1922, was soon outlawed (and remained so until 1996). Contraception was illegal in all but the rarest circumstances until the mid-1980s and the banning of books deemed inappropriate by church authorities was rife. Accordingly the Catholic church exercised a lot of control over the day-to-day lives of Irish people.

Fueling today’s reactions to the church hierarchy and structures is not only anger over revelations about the abuse crisis, but also the anger of many who have felt repressed or curtailed by this restrictive environment.

Any road to recovery for the church in Ireland will be as long as it is rocky. Bishops confidently talk about the need for renewal, but shy away from the word reform. Rome has promised that it will publish the long-awaited report on the apostolic visitation to the country in early 2012. The report, bishops say, will chart the future of Catholicism in the isle once revered as the “Land of Saints and Scholars.”

Some are saying that the future of the Catholicism in Ireland will be as a minority church.

The text of Kenny’s speech is on the NCR Web site: NCRonline.org/node/25821

Also on the Web site is a commentary on the Cloyne report by Dominican Fr. Thomas Doyle, a noted victims’ advocate. His piece is titled “Irish prime minister challenges the Vatican -- and us”: NCRonline.org/node/25822

Clerics' critique brings something new to talk of abuse crisis