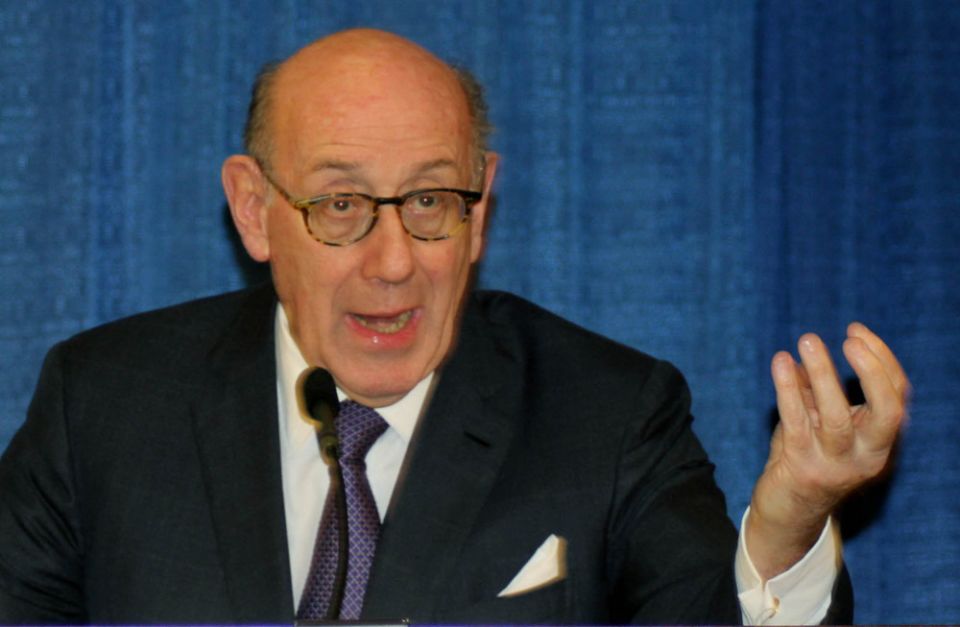 Kenneth Feinberg, a co-administrator of the Independent Reconciliation and Reparations Program of the Archdiocese of Philadelphia, speaks during a press conference in Philadelphia Nov. 13, 2016. (CNS/Matthew Gambino, CatholicPhilly.com)

Philadelphia — A report on the first financial settlements by the Independent Reconciliation and Reparation Program for victims of clergy sexual abuse in the Archdiocese of Philadelphia has been made public.

The program began Nov. 13, 2018, as a way to compensate individuals who had been abused years ago as minors by priests of the archdiocese but whose cases are time-barred from civil prosecution due to Pennsylvania's statutes of limitation.

The program's Oversight Committee released its first interim report on the awards Feb. 15. Of the $8.425 million authorized for payment to date, more than $4.5 million has been paid, according to the report, with the remaining pending victims' acceptance of the terms. The paid claims number 16; there are 20 pending.

While the awards are paid by the archdiocese, it has no control over who receives them or in what amount, since the reparation program is run independently of the archdiocese. The program's decisions are final and may not be appealed.

According to the report, packets were mailed to 348 previously known individuals who had reported sexual abuse. Of this number 70 have filed claims. Some packets were returned by the post office as undeliverable and there are at this time approximately 15 individuals that the archdiocese is still trying to locate and invite to participate in the program.

A total of 120 people registered as victims on the website to date. In addition to the 70 previously known claimants, 16 more have registered, including one claim naming a priest who had not previously been accused of child sexual abuse.

Of this number who registered, 39 were deemed ineligible for a claim. The reason is the program only covers abuse by clergy who are under the control of the Philadelphia Archdiocese; that is diocesan clergy within Philadelphia, Bucks, Chester, Delaware and Montgomery counties.

Claimants need not accept the Independe4nt Reconciliation and Reparation Program's offer made to them by the claims administrator if they think it is insufficient. They can, if they wish, pursue a claim in court.

However, those who do accept the offer made to them by the program must sign a release that would prevent a future lawsuit. For this reason, claimants are advised to seek the advice of an attorney to explain their rights fully before they sign. If they cannot afford an attorney, one will be provided to them pro bono to explain what exactly they are signing.

Unlike civil law there is no statute of limitations for those who file a claim with the reparation program. It does not matter how old the claim is.

This is important because, for example, so many of the cases cited in the two Philadelphia grand jury reports on clergy sexual abuse in the archdiocese (2005 and 2011) occurred many years ago, well past current statutes of limitation for court action. The program therefore gives any victims a chance for reparation that is not available through civil law.

The final settlement figure will almost certainly be far higher than the program's $8.425 million.

The Philadelphia Archdiocese has pledged $25 million to $30 million for initial funding of the program, relying on cash on hand, surplus from its risk insurance fund and liquidated investments. For subsequent funding, the archdiocese intends to take market-rate loans against some internal funds.

The program itself is administered by Kenneth Feinberg and his associate Camille Biros, with Lynn Shiner as the victim support coordinator.

Feinberg has wide experience in victim compensation, most famously as the special master for the September 11 Victim Compensation Fund, also the BP Deepwater Horizon oil spill and the Penn State University settlement.

He along with Biros have worked with no less than 20 diocesan and archdiocesan funds similar to the Philadelphia program in Pennsylvania, New Jersey, New York and Colorado.

Shiner, the victims' advocate, is available to assist potential claimants and supply emotional support. She herself can identify with victims because she is the survivor of a horrible personal tragedy: the murder of her two small children on Christmas Day 1994.

The Independent Reconciliation and Reparation Program Oversight Committee is headed by former U.S. Sen. George Mitchell, D -Maine, who is best known as a key figure in the reconciliation process between Catholics and Protestants in Northern Ireland. Lawrence Stengel is a former chief justice of the U.S. District Court for the Eastern District of Pennsylvania and Kelly Hodge is a former interim Philadelphia district attorney.

To file a claim with the program, claimants must come forward and register through the website PhiladelphiaArchdioceseIRRP.com. Registration must be done on or before July 31, 2019, according to the website. Claimants will be sent a claim packet immediately with a form that must be submitted by mail postmarked no later than Sept. 30, 2019.

Considering there were 348 previously known claimants and 120 newly registered claimants of sex abuse of minors by diocesan clergy, the 86 forms filed to date is a relatively small number. This is to be expected by past experience, according to the reparation program. Typically many claimants wait until near the end, perhaps the last month, of the offer.

Although any information given to the program is maintained in strictest confidence, it also is reported to the local district attorney and to the archdiocese, which will conduct its own investigation.

While the archdiocese never releases the names of victims, the accused priest is immediately taken out of ministry if he is still active, and only returned to ministry if the accusation of sexual abuse of a minor is deemed not substantiated.

The Independent Reconciliation and Reparation Program Oversight Committee will issue its next report in May.

Baldwin writes for CatholicPhilly.com, the news website of the Archdiocese of Philadelphia.

Cardinal Connell of Dublin dies at 90

'All of us together': Sex abuse survivor seeks healing within the church