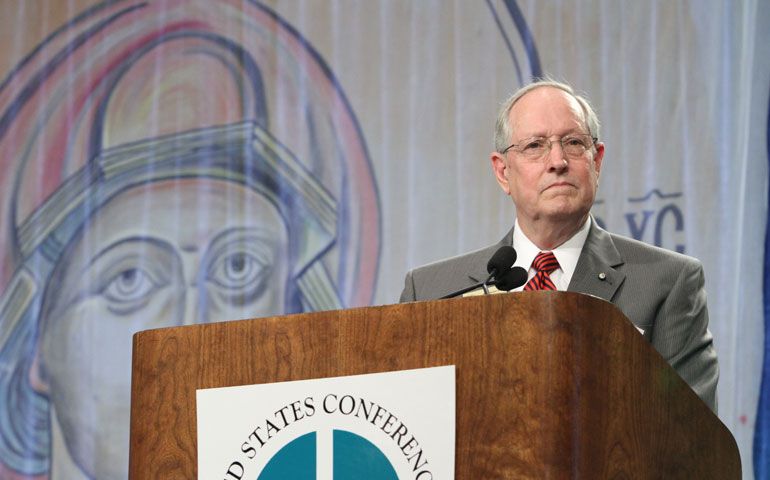 Ten years after the Dallas Charter, the U.S. Catholic church has made progress in the protection of children from clergy sexual abuse, but high-profile cases from coast to coast in the past year underscore the need for continued vigilance.

Those conclusions came as part of the annual compliance audit of the nation’s dioceses conducted by an independent contractor, a requirement established as part of the “Charter for the Protection of Children and Young People,” which the U.S. bishops adopted at their 2002 meeting in Dallas.

“From my standpoint, I think children are safer,” Al Notzon III, chairman of the National Review Board, told NCR. “I think that we have institutionalized the whole idea of safe environment training, victim assistance. And that’s, to me, critical.”

Released in early May, the 2012 “Report on the Implementation of the Charter for the Protection of Children and Young People” found that the past year represented the lowest levels of new allegations by minors of priest sex abuse (397) since data collection began in 2004. It also saw new lows reached in the number of victims who came forward (390), and the number of offenders (313). Each figure denotes less than half those reported in 2004, and 20 percent decreases from 2011.

In 2012 alone, 34 minors brought forth allegations, six of which were deemed credible accusations, 12 determined unfounded and 15 remaining under investigation at the time of the audit. During the same period, 887 adults who claimed abuse during their childhood came forward with allegations for the first time.

The annual audit, conducted by the Rochester, N.Y.-based StoneBridge Business Partners, saw participation from 194 of 195 dioceses. The Lincoln, Neb., diocese was the lone non-participator; in addition, five Eastern Rite dioceses abstained from cooperating with the audit process.

In onsite visits, auditors found 68 of 71 dioceses fully compliant with the charter. Those not in compliance included the following dioceses:

Other audit findings include that dioceses collectively conducted background checks for 99 percent of clerics, and more than 95 percent of educators, employees and volunteers; similar percentages of both groups received safe environment training, as did 4.6 million children. In addition, outreach efforts assisted more than 2,000 people in 2012, more than 400 coming forth for assistance that year.

“The fact that we offer services regardless of whether the allegation is credible or not, is part of the commitment that says you don’t hold up trying to help people,” Notzon said.

Even with the progress, the headline-grabbing scandals in Kansas City, Mo., and Philadelphia in 2012, and in Los Angeles and Newark, N.J., in early 2013 are a reminder that the work is far from over.

“Any time that there is one failure, or one question, it adversely affects the credibility,” Notzon said.

He told NCR that the National Review Board is well aware of the recent allegations coming out of Newark, where an archdiocesan priest has reportedly violated a court-ordered agreement to stay away from children by ministering at parishes in nearby dioceses. He said the Newark situation is among the cases the board will examine at its June meeting.

“We’ll be talking about several of these cases as issues to look against the policy and see what policy changes could be modified in order to patch it up,” he said, identifying the scandals in Philadelphia, Kansas City and Los Angeles, as well those at Penn State and within the Boy Scouts of America, as other topics on the agenda.

“One of these cases alone I think doesn’t overshadow the great majority that are doing a fantastic job, but in the people’s mind, what they remember is the failure, not the successes, and that’s why we’ve got to continuously be vigilant on that issue,” he said.

He added the board has discussed the case of Kansas City Bishop Robert Finn, who was convicted in September for failing to report suspected child abuse, and reported that discussion to Joliet, Ill., Bishop Daniel Conlon, chairman of the U.S. bishops’ Committee for the Protection of Children and Young People.

Making clear the board is not an investigative but an advisory body, Notzon said its role is to examine the policies themselves, specifically in terms of accountability and credibility, in order to make recommendations to the bishops. Despite criticism that the bishops omitted themselves from any real accountability, he said that accountability exists.

“I think the accountability is there, that’s what the audit is all about,” he told NCR, referring to the idea of fraternal correction among bishops in the charter but electing not to discuss examples of times it has occurred.

Notzon was less reserved on the topic of bishop accountability when speaking with Religion News Service. He told RNS May 10 that the National Review Board’s recommendations to the bishops will include increasing their accountability, and that the board will press the bishops to “translate what we have found into action” during the June meetings.

In the auditors’ recommendations, they strongly encouraged dioceses and eparchies to extend the auditing process into parishes, where procedures are -- or are not -- executed. In 2012, 20 dioceses allowed for such audits. Notzon stressed the importance of these ground-level audits, where examinations can reveal valuable information regarding record-keeping processes, such as who fills out a parish’s records, how the records are transferred to the diocese and how attendance at training sessions is documented.

Others suggestions from the audit included creating detailed job descriptions for key personnel involved in the implementation of the charter, and assuring background checks are frequent for those working with children and examine national, state and local records.

Notzon, whose term as board chairman concludes after the June meeting, identified continuing the charter review and bringing the five abstaining eparchies into the audit as top priorities for his successor, Francesco C. Cesareo, president of Assumption College in Worcester, Mass.

The outgoing chairman said he anticipated all dioceses would participate in the next audit, including Lincoln, where James Conley replaced the retired Fabian Bruskewitz as bishop in November. Calls to the diocese to confirm its future participation were not returned before press time.

In the face of sex abuse, the church should rethink the sacrament of reconciliation