by The Associated Press
Accountability
World 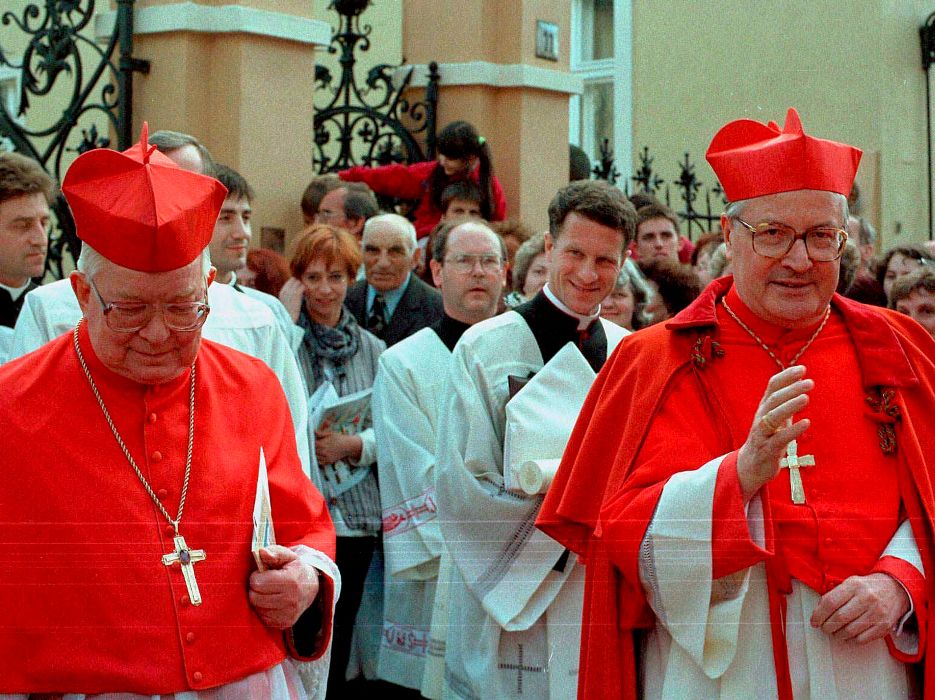 In this May 25, 1997 file photo, now-retired Wroclaw Metropolitan Cardinal, Henryk Gulbinowicz, left, and Legate of the Holy See Cardinal Angelo Sodano on their way to Wroclaw cathedral, in Poland. The Vatican has sanctioned Gulbinowicz, after he was implicated in an alleged case of sexual abuse and in allegedly covering up abuse in another case. The Vatican’s embassy in Poland said Nov. 6 that Gulbinowicz, 97, has been forbidden from using his bishop’s insignia and participating in any religious celebrations or public events. (AP File/Adam Hawalej)

Warsaw, Poland — A prominent Polish cardinal who was recently sanctioned by the Vatican over sexual abuse allegations has been hospitalized since last week and remains unconscious, Polish media reported Tuesday.

Retired Archbishop Henryk Gulbinowicz was sanctioned by the Vatican last week after the 97-year-old was accused of sexually abusing a seminarian and of covering up abuse in another case.

Private Polish broadcaster TVN24 on Monday night aired a documentary suggesting that another well-respected churchman, Cardinal Stanislaw Dziwisz, covered up sex abuse by priests in Poland and elsewhere, including abuse of minors by the Mexican priest Marcial Meciel Degollado.

The head of Poland's Catholic episcopate, Archbishop Stanislaw Gadecki, said in a statement Tuesday he hopes that "all doubts" presented in the documentary "Don Stanislao. The other face of Cardinal Dziwisz" will be "clarified by the appropriate commission of the Holy See."

Dziwisz, the former secretary to the beloved Polish pope St. John Paul II, said he was ready to cooperate with a commission and wanted the matter to be "clarified in a transparent way."

In Gulbinowicz's case, the Vatican Embassy in Poland said Friday that the former archbishop of Wroclaw has been forbidden from using his bishop's insignia and participating in any religious celebrations or public events.

The once well-respected cardinal, who supported Poland's pro-democracy Solidarity movement in the 1980s, has also been denied the right to have a cathedral burial service or to be buried in a cathedral.

Gulbinowicz was also ordered to pay a "certain amount of money" to a Polish church charity that supports victims of sexual abuse.

The embassy's statement said the sanctioning decisions were taken as a "result of an investigation into accusations made against Card. Henryk Gulbinowicz and after an analysis of other allegations" concerning the cardinal.

Professor Wojciech Witkiewicz, head of the hospital in Wroclaw, told Radio Wroclaw Tuesday that Gulbinowicz is in a very serious condition and unconscious.

Last year, prosecutors in Wroclaw opened an investigation into allegations against Gulbinowicz concerning sexual abuse of a seminarian in the 1980s, but they dropped the case because too much time had passed.

Gulbinowicz was also cited in a recent video documentary in Poland, called "Tell No One," about predator priests and coverup efforts. It alleged that Gulbinowicz saved a priest suspected of abuse of minors from arrest by vouching for him.

Gulbinowicz is the latest Polish prelate to be sanctioned after a Vatican-mandated investigation into allegations of sexual misconduct.

The reckoning has rocked the Catholic hierarchy in predominantly Roman Catholic Poland, where the clergy have long been held in high esteem and St. John Paul II, the Polish pope, remains a figure of national pride.