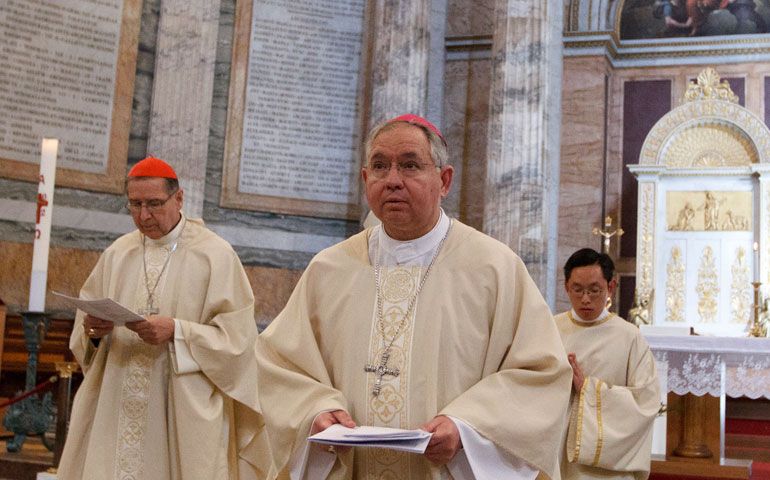 At the Basilica of St. Paul Outside the Walls in Rome, Cardinal Roger Mahony, left, and Archbishop Jose Gomez walk in procession after concelebrating Mass with other U.S. bishops making “ad limina” visits to the Vatican in April 2012. (CNS/Paul Haring)

While Los Angeles Archbishop Jose Gomez said he and his fellow bishops are "committed to moving forward" from the fallout of the late-January release of thousands of pages detailing clergy sex abuse, revelations from a December 2012 finance report have kept the focus on how the archdiocese plans to fund the largest abuse settlement in U.S. history.

"We need to keep praying for those who are hurting. We need to ask again for forgiveness for the sins of the past and for our own failings. And we need to match our prayers for grace with concrete actions of healing and renewal," Gomez wrote in a Feb. 8 column for his archdiocesan paper, The Tidings.

But how the Los Angeles church advances past its abuse scandal remains tied to how it first deals with its 700-million-pound elephant -- $722 million, to be exact, in global settlements agreed upon in 2005 and 2007 with 550-plus victims in clergy abuse cases.

For the 2007 settlement alone, Tod Tamberg, director of media relations, confirmed insurance companies contributed $236 million, religious orders and their defendants paid $132 million, with the archdiocese funding the remaining balance through $117 million of archdiocesan assets, investment resources and property liquidations, and a $175 million bank loan, which has been refinanced.

The report, conducted by an independent auditing firm, also reveals the archdiocese has considered a capital campaign as one means to repay the $175 million loan, nearly $147 million of which was still outstanding as of June 30.

In the 2012 fiscal year, the archdiocese hired the Catholic consulting firm Guidance in Giving Inc. to conduct a planning study for a $200 million campaign that would address a variety of needs -- priest retirement, seminarian education, Catholic schools, Catholic Charities and parish needs, according to the consultant firm's website -- but did not directly mention abuse settlements. The fundraiser, if held, would be the first such effort for the archdiocese in more than 60 years.

Other funding sources have already come to light.

A day after Gomez's column published, the Los Angeles Times reported that the archdiocese had reallocated $115 million, or 88 percent, of a cemetery maintenance fund toward relieving the $660 million 2007 global settlement.

According to the 2012 report, the archdiocese in October 2007 appropriated $144,986,000 from the perpetual care fund "for purposes of funding the global settlement reached in July 2007 related to the lawsuits for claims of sexual misconduct by certain individuals." The report stated the archdiocese intended to replenish those funds through future cemetery sales of graves, crypts and niches, though not until "all liabilities associated with the [2007 global settlement] lawsuits … are paid off."

The Times stated that the archdiocese's repurposing of cemetery funds, while legal, came without first informing relatives of the deceased of its decision. Nor did it list the cemetery fund as a source for the global settlement in numerous public statements regarding its financing.

The archdiocese classified the Times story as an attempt "to create a false impression" that it had hindered cemetery operations by redirecting the funds toward the global settlement.

"Nothing could be further from the truth. Our 12 Catholic Cemeteries remain in financially sound condition," read a letter sent to parishes Feb. 12.

Since 2007, the archdiocese said it has made $8.7 million in capital improvements to the cemeteries. It defended the funds' reallocation as a way to protect other assets -- parishes, schools and "essential ministries" -- and said it does not foresee future negative impacts to the cemeteries' maintenance.

Still, it remains unclear how much the archdiocese spent in defending itself against abuse claims before reaching the global settlements. Only the 2012 report is available from the diocese currently, and requests to review past financial reports had not been granted at press time.

Two weeks after writing his own defense following his barring from public and administrative duties in the archdiocese for his role in the sex abuse scandal, Cardinal Roger Mahony returned to his personal blog Feb. 14, saying God's grace had helped him understand his call "to be humiliated, disgraced and rebuffed by many."

"In recent days, I have been confronted in various places by very unhappy people. I could understand the depth of their anger and outrage -- at me, at the Church, at about injustices that swirl around us," he wrote Feb. 14. "Thanks to God's special grace, I simply stood there, asking God to bless and forgive them."

The sanctions against Mahony, who retains his vote in the upcoming papal conclave, came the same day as the Jan. 31 court-ordered release of 12,000 abuse-related documents, and at the hand of Gomez, who also relieved Auxiliary Bishop Thomas Curry from his post as regional bishop of Santa Barbara. In his Feb. 8 column, Gomez attempted to further address his relationship with Mahony, with whom he had entered into a rare public spat between bishops.

"I have been talking and reflecting with Cardinal Mahony and Bishop Curry, along with our other Auxiliary Bishops about the events of last week. We are committed to moving forward in our ministries with hope and confidence in God's grace," Gomez wrote.

Gomez appeared to use his column not only as an attempt to repair his public quarrel with Mahony, but as a way to unite his archdiocese in moving forward, urging all Los Angeles Catholics to use the Lenten season to seek "the grace of a new conversion" and "to draw closer as one family of God."

"The way forward for our Church is for each one of us to rediscover this universal call to holiness," he said.

Vatican trial: Ex-student says he was abused at minor seminary