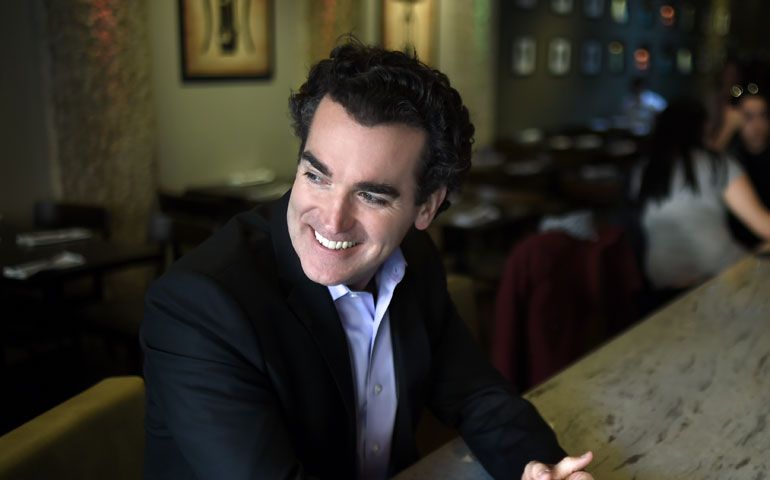 Brian d'Arcy James: "My identity has been shaped and formed by my evolution as a Catholic. It's something I'm proud of." (Jordan Matter)

New York — Like many people, actor Brian d'Arcy James was aware of news coverage of sexual abuse by clergy in the Boston archdiocese 15 years ago, but he didn't follow it closely. He had no way of knowing those events would one day be part of his life.

"It was on my radar," he said. "I received information wholesale and processed it as best could."

It wasn't until he read the script for "Spotlight," the new film based on The Boston Globe's four-member investigative team that pursued and broke the story, that he understood its magnitude. "For me, it was an education in terms of the size and scope, and the ramifications of the reporting," he said.

He saw the coverage as "a beacon of sorts" coming as it did from a reputable news source. "People who perhaps had not been heard or believed prior to that could say, 'This is my story.' "

James, 47, discussed the film in his dressing room at Broadway's St. James Theatre, where he is starring in the zany hit musical "Something Rotten!" A practicing Catholic, James said portraying Matt Carroll, one of the Globe reporters, helped him see the cover-up as "an institutional problem with significant and widespread consequences," but said he still finds spiritual comfort in Catholicism.

"It's not something to make me leave the church," he said. "I lost a lot of faith in the institution. I'm still baffled by it, but it didn't stop me all together. I'd be lying if I said it didn't slow me down.

"My impulse is still to attend church and experience the ritual of the Mass."

The movie's goal is not to make the church look bad, James said. "It's the responsibility of anyone in power to do the right thing. When they don't, they have to be held accountable."

It's happenstance, he said, that the film is being released on the heels of Pope Francis' American tour, which was largely a positive boost for the church's image because of the pope's popularity.

"It's a great thing because the pope made comments about sexual abuse in the Catholic church," James said. "He said, 'God weeps.' He said he will hold people accountable and I hope he does. I wish he had spent more time on that subject matter, but he started a conversation. That creates a space where dialogue can occur. It all comes back to accountability.

"Catholics can see this film without defensiveness."

Raised Catholic in Saginaw, Mich., James attended St. Stephen School through high school. "The teachers taught us to value education in the way they taught us to think," he said. "It was a great benefit. My education taught me to toil the soil of a subject."

He also was influenced by how his parents drew "a great deal of strength and solace" from their Catholic faith.

"It allowed them to live lives fulfilling for them," James said. "It taught them and me to live a life of thoughtfulness, generosity and respect for others, the Golden Rule.

"My identity has been shaped and formed by my evolution as a Catholic. It's something I'm proud of."

He now attends Holy Trinity Catholic Church in Sherman, Conn., with his wife, actress Jennifer Prescott, and their 13-year-old daughter, Grace. Lately, though, he's "been porous in my attendance."

That is understandable, considering the rigors of performing eight shows a week in a Broadway musical, portraying Nick Bottom, a struggling Renaissance playwright who consults a soothsayer who tells him that hit plays in the future will involve singing and dancing as well as acting — all in the same show! -- so Bottom sets out to create the world's first musical. James is onstage for 100 of the show's 125 minutes.

His efforts earned him a best actor Tony Award nomination. The show received 10 nominations, including the one for best new musical.

Besides being a regular on New York stages, James has appeared in several TV shows, such as "Smash," as well as many films, including the upcoming "Sisters" with Tina Fey and Amy Poehler. In mid-December, he will be featured in the New York Pops holiday concerts at Carnegie Hall.

While James followed his heart into the theater, with his background he could easily have moved into politics. His maternal grandfather was governor of Michigan and his father, a lawyer, served on the city council and was involved with Republican fundraising. James considered following in the family trade "for a few seconds" before heading to Northwestern University to major in theater.

In preparing for his role in "Spotlight," James read Globe coverage and spent time with Carroll to understand who he was and how he worked. Carroll's work and research were James' road map into the role. Although he didn't meet with any of the church abuse victims, people who had suffered abuse shared stories because of his role in the film.

"It allowed people to speak, to say, 'Let me tell you my story.' The movie has the potential to do that."

It's also a "good, old-fashioned movie," he said.

"People love a David and Goliath story, especially when it comes to justice. It's a very compelling thing to watch. Add to that the fact that it's true, and it's stunning."

[Retta Blaney is author of Working on the Inside: The Spiritual Life Through the Eyes of Actors.]

Kurtz on 'Spotlight': Praise for the media