More than a year after their pastor took a leave after an allegation of sexual assault against a fellow priest emerged, parishioners at St. Andrew Parish in Westwood, New Jersey, were notified Dec. 14 that Cardinal Joseph Tobin of the Newark Archdiocese has appointed a new pastor: Msgr. Joseph Chapel.

His appointment was announced at weekend Masses, and he will take the place of Fr. James Weiner, who took leave from St. Andrew's in August 2018.

This summer, NCR reported on parishioners protesting in front of the church, demanding a new pastor. The news of Chapel's appointment, first made during the 5 p.m. Mass on Saturday, was greeted with applause.

"We are happy that the archdiocese and Cardinal Tobin heard the plea of the parishioners. We are looking forward to working with Fr. Chapel, the new pastor," said Frances Yates, a parishioner and one of the demonstrators.

The allegations against Weiner date back to 1988, when Fr. Desmond Rossi, a priest of the Diocese of Albany, New York, accused Weiner and another priest of sexual assault at St. Benedict Parish in Newark. Rossi, who was a seminarian for the Newark Archdiocese at the time, said two transitional deacons assaulted him in the rectory. He identified Weiner as one of the attackers, and also identified another deacon, who has since died.

An archdiocesan review board later found the charges credible but unproven, and Weiner was allowed to continue as a priest.

Speaking to NCR over the phone, Rossi said that the Newark Archdiocese has not contacted him for over a year-and-a-half.

He said that his case was complex. "Number one, I am a priest, a part of the church. I don't want to hurt the church. I've done everything to not hurt the church, but rather to call her to accountability and a purification," he said. 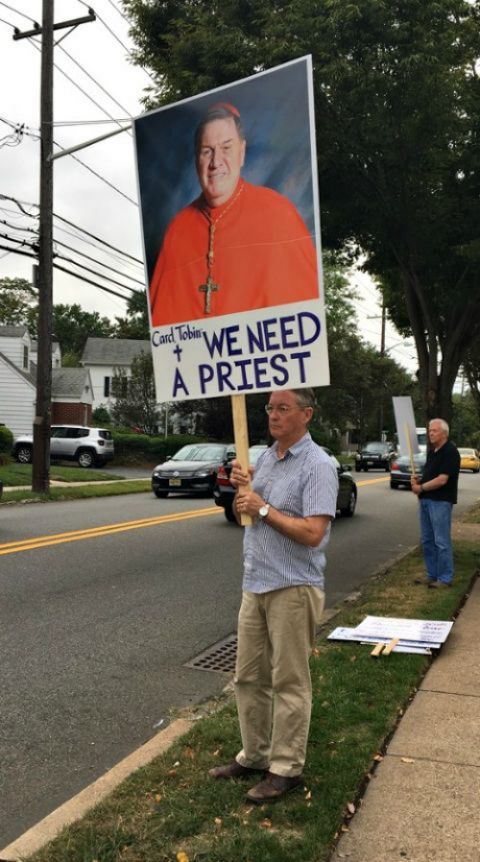 Chapel's appointment is effective Feb. 1, 2020. He is currently the pastor of Our Lady of Mercy Parish in Park Ridge, New Jersey.

Mike Fitzsimmons, a St. Andrew's parishioner who was at the forefront of the demonstrations, welcomed this news. "Many people thanked us for being active and bringing to the cardinal's attention the need for a full-time pastor," he said.

The Newark Archdiocese, via a statement, said that although Tobin accepted Weiner's resignation, it was in no way "an admission of wrongdoing by either Fr. Weiner or the Archdiocese of Newark."

While the investigation is ongoing, Weiner could eventually return to the ministry.

"The cardinal looks forward to resolving the allegation regarding Fr. Weiner in the very near future. The hope is that Fr. Weiner will be reassigned at some point to ministry," said archdiocese spokesperson Maria Margiotta.

The archdiocese did not address the status of the investigation.

Despite the delay in the ongoing investigation, Rossi said he is determined to pursue the matter, "not just for myself, but for the integrity of the church, which needs to be transparent, honest and open about these cases."

Rossi said he was happy for the parishioners of St. Andrew Parish and welcomed the appointment of Chapel. "He's a good man. He's an honest man. He's very faith-filled and capable."