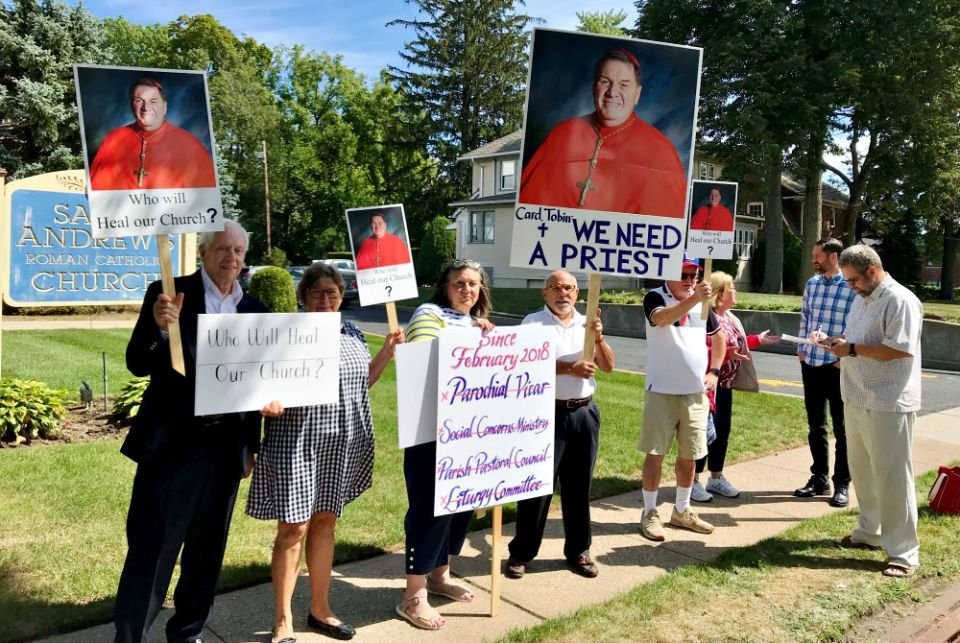 Westwood, N.J. — During Mass at St. Andrew Church here, the traffic slows down. A few parishioners can be found standing on the sidewalk with signs in hand while drivers catch a glimpse.

A year after NCR reported on the divisions within St. Andrew over abuse allegations against its pastor, the church is without a full-time priest. Dismayed that the Newark Archdiocese has not sent them a new pastor, some parishioners have taken to protest.

Demonstrators are circulating a petition among churchgoers, urging the archdiocese to send them a pastor. Many parishioners say they are against the picketing, stating it brings negative attention to the church." "But I'll sign the petition because we need a pastor. What's taking Newark so long?" asked one parishioner.

The cloud over St. Andrew emerged in January 2018, when Fr. James Weiner was named pastor. Just 48 hours later, some parishioners learned that he had been accused in a clerical abuse case.

The allegations date back to 1988. Fr. Desmond Rossi, a priest of the Diocese of Albany, New York, accused Weiner and another priest, now deceased, of sexual assault at St. Benedict Parish in Newark. Rossi, a seminarian at the time, said two transitional deacons assaulted him in the rectory after a night of drinking. While one of them threw him on the bed and began kissing him, the other tried to force oral sex on him. Rossi identified Weiner as one of the attackers. An archdiocesan review board found the charges credible but unproven, and Weiner was allowed to continue as a priest.

Weiner has denied the charges.

"We first went to the director of religious education," said Frances Yates, a St. Andrew parishioner. "I told her*, 'What will happen when parents Google this? Shouldn't we have a meeting and express our concern?' "

News of the parishioners' discomfort with Weiner's appointment reached Newark. Yates said an archdiocesan official told her that the allegations were not true, and that the issue had been resolved.

In September 2018, Newark Cardinal Joseph Tobin reopened the case against Weiner. Weeks before his installation as pastor, Weiner went on voluntary leave while still officially remaining as pastor.

The archdiocese assigned a parish administrator — first Fr. Michael Sheehan and then Fr. Sean Manson, both of whom are pastors of nearby parishes. But stability still eludes the parish.

"Fr. Mike made an attempt to establish a pattern of parish council meetings," said Bob* Yates, Frances' husband and one of the demonstrators. "But it was difficult for Sheehan to do because he was also running another parish. Sean came in and shut it down. Even the liturgy committee has been disbanded."

A 'listening session" and "Healing Our Church" meeting for the parish, both intended to address concerns about the sex abuse crisis, were canceled.

"After the [clerical abuse] scandal in Pennsylvania, a lot of churches have been doing that [Healing Our Church]," said Frances Yates. "So why is St. Andrew's told we can't run Healing our Church? What's the downside of doing this and who's behind it?"

During the summer, a parishioner found it difficult to find a priest to administer the last sacraments to his dying wife. After placing numerous phone calls, a priest from a neighboring parish visited.

"But it's not the same as someone who knows the family," said a friend of the couple. Those looking for baptisms, first Communions and weddings also find themselves searching.

"They gave their finances, time, talent and treasure to the church. But the church is not there when they needed it," said Mike Fitzsimmons, a parishioner who's at the forefront of the demonstrations. 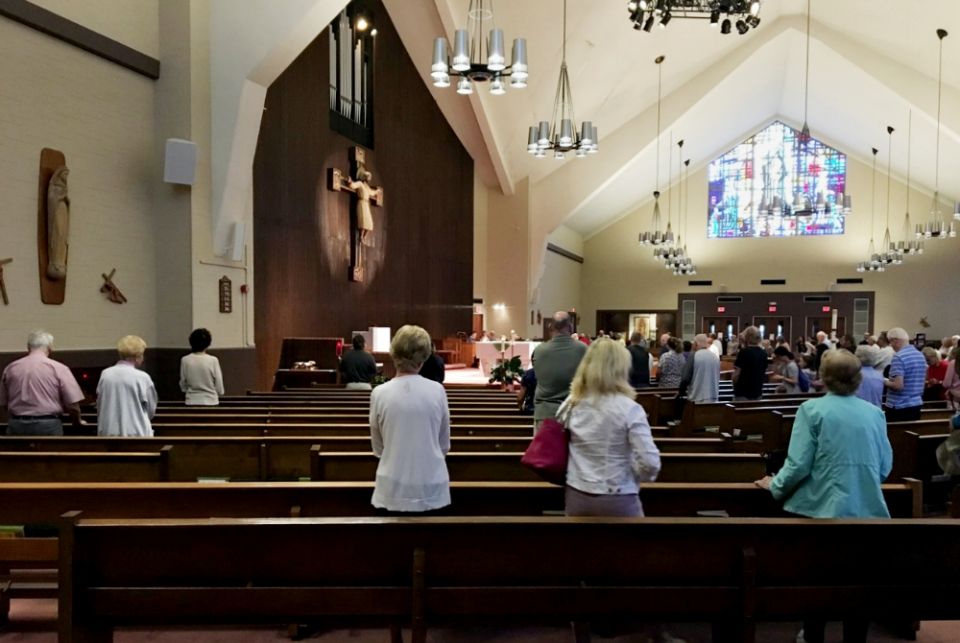 The archdiocese did not address the status of the investigation into Weiner. NCR tried to contact Rossi but was unable to reach him. Archdiocesan spokesperson Maria Margiotta told NCR that Manson "has been leading the parish, which continues to build its congregation with ongoing ministries. The engagement of parishioners with the parish pastoral staff remains vital to these initiatives."

Margiotta said "Healing Our Church" was postponed to a later date at St. Andrew, as well as at other parishes in the archdiocese, "to fit in better with parish pastoral planning and local events and circumstances." Manson and the parish staff made that decision for St. Andrew, she said.

The Spanish-speaking community at St. Andrew has also been left without a priest and, according to some parishioners, 40 people have left for another parish.

Parishioners who spoke to NCR said they feel a sense of betrayal and neglect. Some have stopped going to church regularly. Janice O'Neill, a lector and eucharistic minister, said she had been skipping some Sunday Masses because of the turmoil in the parish.

O'Neill says Weiner was a "good leader and had good messages" for the parishioners. "My first thought was, 'What a shame'. He seemed like such a nice man. I was sad for him and the church. St. Andrew's needs a new pastor to start healing and it probably should not be Fr. Weiner, given his history."

She hopes that in the spirit of "repentance and forgiveness," Weiner can fulfill a non-parish-based role elsewhere.

"Fr. Weiner's case needs to be brought to a close and based on the findings, the appropriate steps need to be taken. It's not fair to him, his accuser, or our parish to keep this lingering on," she said. 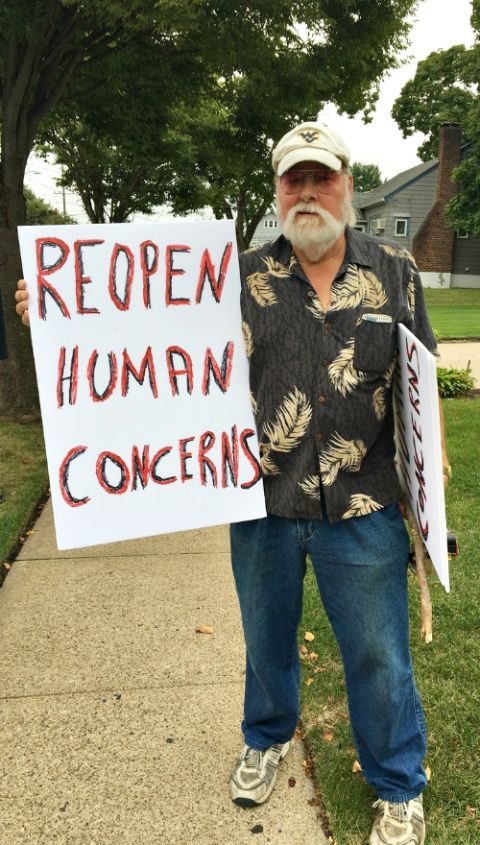 Various ministries at St. Andrew have closed down, due to what parishioners say is a lack of pastoral leadership. The parish Human Concerns group, active for 44 years, provided clothes, shoes and other household items to the needy in the parish and around the world. But in June this year, the archdiocese decided to shut down the ministry and direct all donations to Catholic Charities in Newark. A donation bin was removed and replaced with one for Catholic Charities.

Gregg Ryan, president of Human Concerns, is one of the protesters outside St. Andrew. "We took in bedding, shoes, appliances; we took in everything you needed to set up a new home. The beds especially. People who don't have anything, they have taken the biggest hit here," he said.

The 100-volunteer strong ministry is now fighting to be reopened. "We are in shock," said Rosie Molina, a single mother of two. "That day we got there [to the church] around 5 p.m., as we usually do, everything was closed, without any notice. They just changed the bin."

Molina, a parishioner for the past 10 years, credits Human Concerns for helping her through tough times. She works as a house cleaner and relied on donations when her children were little. "All my clothes, my shoes and other needs of the house came from donations to Human Concerns. I'm a single mom with two kids. It's hard when you have to decide, 'Do I spend money on clothes or food?' When you get clothes from here [Human Concerns] you have money to get food, pay the rent and other bills," she said.

Margiotta acknowledged Human Concerns' contribution to the needy at St. Andrew and surrounding communities, but said there was a need to improve the process.

"Allowing donations to pile high in the St. Andrew's Church basement served no one well. St. Andrew's Church personnel made the decision to continue the clothing donation ministry in partnership with Catholic Charities of the Archdiocese of Newark to resolve the challenges in successfully administering the program," said Margiotta.

Molina said the decision created hardship. She will now have to go to Newark, around 25 miles away. "It's very hard to go to Newark. I have to spend the entire day to make a trip there. I can't go to work and I'm going to lose pay," she said.

Retired nurse Antoinette Nicolas, who has been volunteering in the ministry since 1990, would send a container to Haiti to help the poor. But since the ministry shut down, she's been buying clothes and shoes on sale to send to Haitian children. 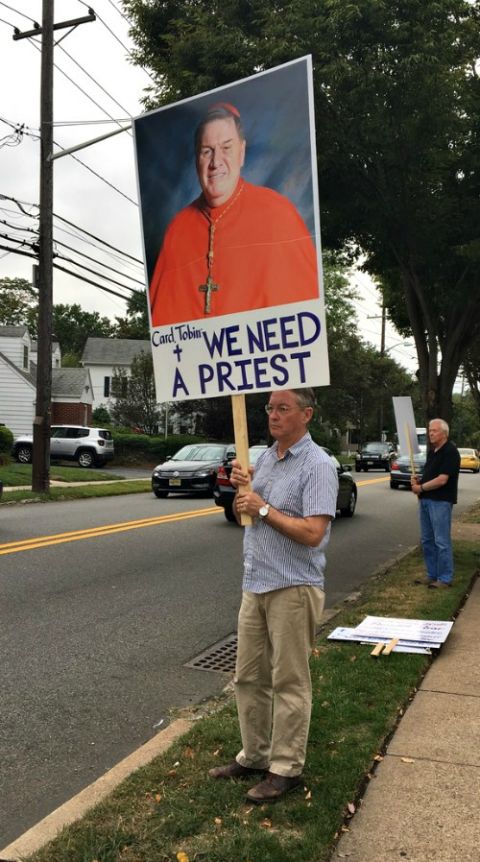 These days, rumors are flying thick and fast at St. Andrew. "The message they are sending out now is that they don't want the parish to stay open," said O'Neill.

Under this cloud of uncertainty, parishioners said they want transparency. "We are not judging the messenger, but when someone like Tobin talks about transparency, you want to believe him. But we've been frozen in amber. We want to move forward," said Fitzsimmons.

"I get that the archdiocese has legal issues going on and you've been restricted on what to say, but we are getting all our information through newspapers," said Frances Yates.

"He regrets any pain caused to the devoted parishioners of St. Andrew's Church, which has served the Westwood community for more than a century. The cardinal understands the desire for a timely decision, but the archdiocese is giving this situation the careful deliberation and due diligence it deserves," she said.

On October 2, Frances Yates and Fitzsimmons took their demonstration to St. Peter the Apostle Church, River Edge, where Tobin was visiting to participate in the "Forward in Faith Together" presentation. They were granted a 30-minute meeting with Tobin in the rectory.

"The discussion centered on needing a fulltime parish priest to address the spiritual and urgent needs of the parish, as well as the requirements of the Spanish community," Yates and Fitzsimmons wrote in an email. It also addressed the abrupt closure of Human Concerns and the disrepair of the parish. "We look forward to prompt resolution and action from Cardinal Tobin within the next week."

As a result of their meeting with Tobin, the organizers have temporarily suspended their demonstrations outside the church.

* This article has been edited to correct a quote and a first name.

A version of this story appeared in the Nov 1-14, 2019 print issue under the headline: No stability for St. Andrew Church .