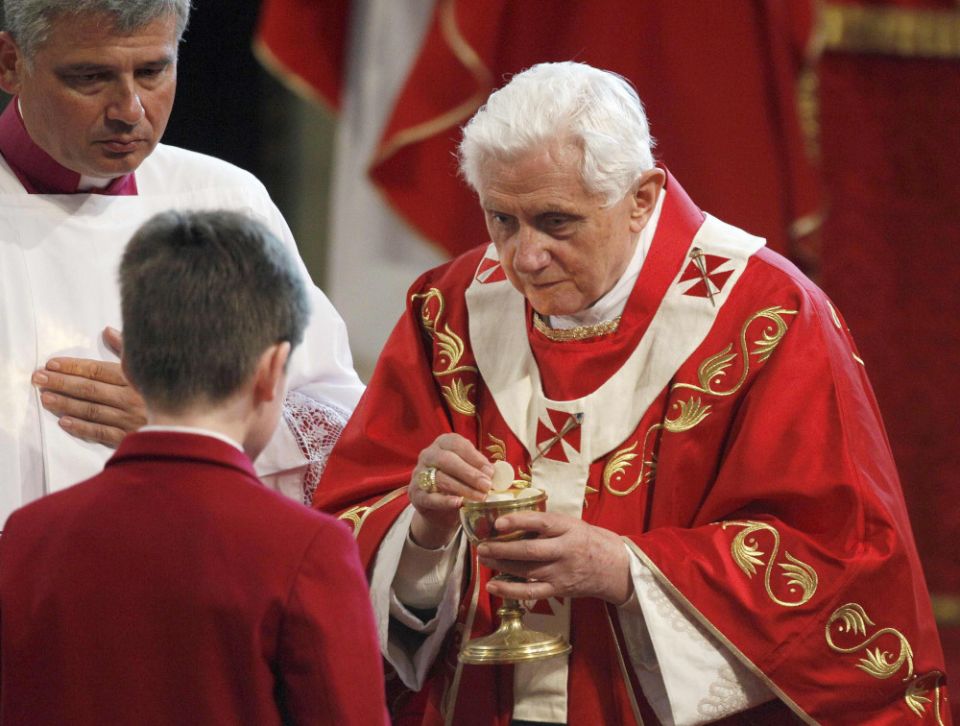 Pope Benedict XVI gives Communion to a young man during Mass at Westminster Cathedral in London in this Sept. 18, 2010, file photo. During the service the pope expressed his "deep sorrow" to the victims of clerical sexual abuse, saying these crimes have caused immense suffering and feelings of "shame and humiliation" throughout the church. (CNS photo/Reuters pool)

In a Jan. 30 talk show on the German TV network ARD, Batzing reiterated his previous calls for the former pope to make an apology after a Jan. 20 report commissioned by the Archdiocese of Munich and Freising faulted Benedict's handling of four cases of abuse in the 1970s and 80s.

"He must comment, he must override his advisors and basically utter a plain and simple sentence: 'I have been guilty, I have made mistakes, I ask the victims for forgiveness.' There is no other way," Batzing said.

The Munich archdiocese commissioned the report from a law firm, with a mandate to look into abuse between 1945 and 2019 and whether church officials handled allegations correctly.

Benedict, the former Cardinal Joseph Ratzinger, served in Munich from 1977 to 1982 before becoming the head of the Vatican's Congregation for the Doctrine of the Faith and later being elected as pope.

Asked whether he believed Benedict would ask for forgiveness, Batzing said: "I trust that he can – provided he manages to distance himself from his advisors." The Limburg bishop said it had been a weakness of Benedict's to not always have surrounded himself with the best advisors.

Batzing spoke of the "immense damage" that had been inflicted by the comments made by the former pope since the report's release about sexual abuse in the Munich and Freising archdiocese.

In the wake of the report, Benedict last week corrected his original account that he had not as Munich archbishop attended an important meeting where the topic was finding a place for a priest who had been a repeat offender. Benedict was also criticised for his comments about a priest who carried out sexual acts in front of under-age girls.

A decade later, struggle for accountability within LCWR on abuse continues

A strong press is the Lafayette lesson

A life built on trust in God is built on solid ground, pope says