Twin Cities' Hebda: Archdiocese's response to abuse allegations was failure, not a crime 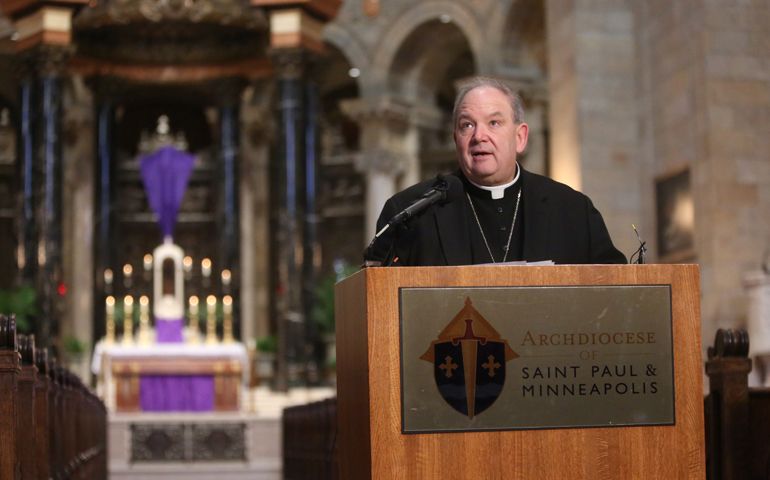 Archbishop Bernard A. Hebda addresses the media at a news conference March 24 at the Cathedral of St. Paul in St. Paul, Minn. (CNS/Dave Hrbacek, The Catholic Spirit)

In the wake of the dismissal of criminal charges, the head of the St. Paul-Minneapolis archdiocese is maintaining its legal innocence in its response to abuse allegations concerning former priest Curtis Wehmeyer, drawing a distinct line between a failure and a crime.

In addition, Archbishop Bernard Hebda stated he will not release the investigative report into sexual misconduct allegations raised against his predecessor Archbishop John Nienstedt, calling it "unwise" at this point.

Hebda made the comments Tuesday in a column and interview published in the archdiocesan newspaper. They came nearly two weeks after the Ramsey County Attorney's Office ended its criminal case against the archdiocese after it agreed to include an admission of wrongdoing into an earlier civil settlement along with several additional provisions.

The criminal case, brought last summer and soon followed by the resignations of Nienstedt and Auxiliary Bishop Lee Piché, alleged that the archdiocese failed to protect children in relation to three minors sexually abused by Wehmeyer, a priest in the Twin Cities before he was laicized in March 2015. He is currently in prison in Wisconsin.

"To be clear, the archdiocese failed the victims of Curtis Wehmeyer and their family -- and for that we are deeply sorry," Hebda said in the column published in The Catholic Spirit.

He continued: "A failure, however, isn't the same as a crime. That is a legal question, not a moral question. … Committing a crime implies a criminal intent and is something altogether different from failing."

In that respect, Hebda, who holds degrees in both civil and canon law, said the archdiocese was adamant it was not guilty of a crime. During negotiations, Ramsey County Attorney John Choi insisted that "the archdiocese plead guilty to the criminal charges in some way, shape or form," Hebda said, a point that led to the talks' failure. The archbishop said while the archdiocese was willing to admit failures or moral culpability, it was unwilling to plead guilty to a crime it didn't believe it committed.

"The simple truth is that if we believed we were guilty, we would have pled guilty," Hebda said.

In its motion to dismiss, filed Jan. 29, the archdiocese argued prosecutors failed to allege or establish a "direct causal link" between archdiocesan actions, words or omissions and the victims' abuse, delinquency and need for protection and services.

In its response two months later, the state held that the archdiocese itself was culpable in that top officials -- specifically, Nienstedt, Piché and former delegate for safe environment and vicar general Fr. Kevin McDonough -- failed to act on the knowledge of Wehmeyer's past misconduct and in effect, left him in a position to sexually abuse children.

After the exchange of legal arguments, the two sides entered mediation May 18, and after 15 hours reached the agreement that dismissed the criminal charges in exchange for inserting the archdiocese's public admission of failure and additional court oversight measures into the civil settlement reached in December.

As for the Nienstedt investigation, Hebda said "it would be unwise" to release the resulting report, largely because witnesses came forward with the understanding of confidentiality. He said witnesses are free to come forward as they choose; several have already done so through local media.

He said "a great deal" of the details of the report -- completed in early 2015 under defense attorney Peter Wold -- were already known: through media reports, his and Nienstedt's statements, and documents unsealed by Ramsey County -- including an 11-page memo from Fr. Dan Griffith, former delegate for safe environment, that chronicled the investigation from its emergence in fall 2013, to the withdrawal of the Greene Espel law firm, which initially led the inquiry, that July.

Hebda in the Q-and-A added that the Ramsey County investigation found insufficient evidence to bring forth criminal charges against any individuals and that questions to whether Nienstedt's alleged misconduct compromised his leadership "became irrelevant in my mind" once he resigned last June.

"Moreover, canon law is sufficiently realistic and practical in that it doesn't authorize bishops to judge their peers, and does not contemplate any further role in this matter for me or the archdiocese," Hebda said.

In a statement released July 20 after the memo and other legal documents were disclosed, Nienstedt said at that point he had not seen a final report of the investigation, and reiterated the allegations against him "were and still are absolutely and entirely false." The archbishop is currently residing in the Santa Rosa, Calif., diocese where he is serving as an outside consultant for the Napa Institute Foundation.

Addressing a question to whether a cover-up took place -- as Griffith claimed occurred under the directive of now-retired apostolic nuncio to the U.S. Carlo Maria Vigano -- Hebda replied, "I know that those involved within the archdiocese sincerely disagreed with one another about how to best move forward with completing the investigation." He added Piché, who oversaw the investigation, believed it "comprehensively addressed the allegations."

"What is apparent to me now is that the investigation was extraordinarily challenging and the process used by the archdiocese created additional issues," he said but did not elaborate beyond saying "we have learned some lessons." Namely, future allegations against the archbishop or auxiliary bishops are to be directed to the board of directors of the archdiocese corporation.

While the criminal case has closed, the Twin Cities archdiocese's bankruptcy continues.

Last week, a creditors' motion to consolidate more than $1 billion in assets was denied by a federal judge. The motion was made days before the archdiocese filed a reorganization plan that allocated $65 million to establish a trust for settling claims of alleged clergy sexual abuse.

In his decision U.S. Bankruptcy Judge Robert Kressel, issued in court July 28, said he lacked authority to include the archdiocese's 187 parishes (separately incorporated under Minnesota law) and 10 other separate corporations and foundations.

Even with such authority, Kressel ruled the creditors' committee, with 440 claimants in all, "failed to sufficiently establish" that the archdiocese, its parishes and the various organizations functioned as a single, interrelated operation under the direct control and authority through the archbishop.

"There is no doubt that the Catholic Church is hierarchical in its organization and authoritarian in doctrinal matters. But those characteristics are insufficient for a court to ignore its corporate legal structure," he wrote.

He added creditors didn't demonstrate how the benefits of consolidation would outweigh harm to certain creditors, specifically parishes and other targeted entities with no claims of clergy sexual abuse against them.

In a statement July 28, Hebda said he was "pleased" with the ruling and that the judge was not swayed by creditors' accusations that the archdiocese hid assets.

"The Archdiocese has fully and appropriately disclosed its assets," Hebda said, adding it is prepared to work toward providing fair compensation for sexual abuse claimants.

Jeff Anderson, one of the attorneys representing bankruptcy claimants, maintained the archdiocese hid assets "the same way they hid sexual offenders and their misconduct for years."

"We will continue to fight against this injustice," he said.

Past diocesan bankruptcies suggested the creditors' motion was a longshot, particularly in the case of the parishes. A bankruptcy judge has yet to rule that separately incorporated parishes should be consolidated into the bankruptcy estate.

Time to put the 'catholic' back into the Catholic Church