The search process has begun for the next compliance auditor for the U.S. bishops' clergy sexual abuse policies.

In a press release April 30, the National Review Board of the U.S. Conference of Catholic Bishops announced a request for proposals for firms to conduct the 2020-2022 annual audits of the Charter for the Protection of Children and Young People, also known as the Dallas Charter.

Since its adoption in June 2002 at the bishops' meeting in Dallas during the peak of the church's clergy sexual abuse crisis, the charter has called for an audit process as part of an annual public progress report issued by the conference's Secretariat of Child and Youth Protection. The audit has been conducted each year since 2003.

The 2016 audit, the report most recently released, was conducted by StoneBridge Business Partners, an auditing firm based in Rochester, New York. StoneBridge has audited the charter since 2011 report, and is under contract to oversee the next three-year cycle (2017-2019), as well.

James Marasco, a founding partner at StoneBridge, told NCR the firm, whose contract expires in 2019, has been invited to submit a bid for the next audit cycle, but has yet to make a decision. The deadline for letters of intent is June 10, with final proposals due by Aug. 30, followed by an interview process in the fall. 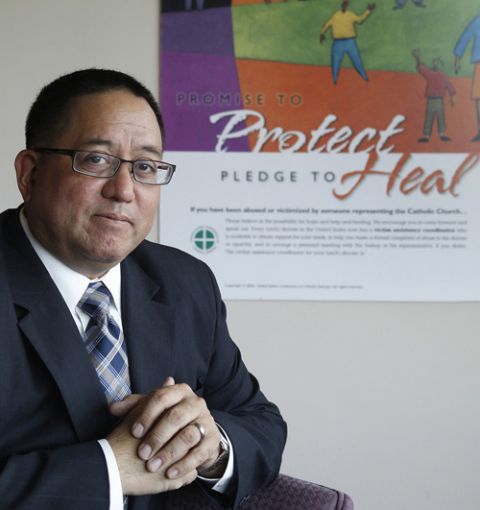 Deacon Bernard Nojadera, director of the U.S. bishops' Secretariat of Child and Youth Protection, is pictured in 2012 at the U.S. Conference of Catholic Bishops in Washington. (CNS/Bob Roller)

Deacon Bernie Nojadera, executive director of the conference's Secretariat of Child and Youth Protection, told NCR in an email he did not anticipate a new auditor being selected by the end of the year.

The final selection decision rests with the U.S. bishops' administrative committee, which is to consider a recommendation from the National Review Board and also consult with both the secretariat and the Committee on the Protection of Children and Young People.

Presently, the audit process consists of onsite visits for roughly one third of the 196 U.S. dioceses and eparchies, selected on a rotating schedule, with the remainder participating through a data compilation procedure. Marasco said a team of roughly 20 auditors work on the audits, and are typically in the field any time between July and December.

"We are professional auditors. This is what people do day in and day out," he said.

While the Dallas Charter directs the undertaking of a compliance audit, canon law prohibits a participation requirement for dioceses, though they are strongly recommended to do so. The audit does not include verification of the bishops' corresponding Essential Norms for Diocesan/Eparchial Policies Dealing with Allegations of Sexual Abuse of Minors by Priests or Deacons.

That omission is regularly highlighted by critics of the bishops' adherence to their own policies concerning child sexual abuse prevention. In April, the abuse survivors advocacy group Catholic Whistleblowers recommended revisions to improve the charter, including broadening the auditing process through adding to it a compliance check of the Essential Norms and mandating parish-level reviews.

The 2016 audit, conducted July 1, 2015 to June 30, 2016, reported that all 178 dioceses and all but two of the 18 eparchies participated in the process. Of the 65 dioceses and eparchies where site visits took place, two dioceses and one eparchy were found noncompliant: the Alexandria, Louisiana, diocese was found to have requested confidentiality as part of a settlement; the Altoona-Johnstown, Pennsylvania, diocese did not have in place an active diocesan review board, nor did the Stamford, Connecticut, eparchy, which also was found not providing safe environment training for children and youth.

The StoneBridge auditors also reported that during the review period 1,232 abuse survivors brought forward 1,318 allegations in 132 dioceses and eparchies — an increase from the two prior years that auditors attributed to ongoing bankruptcy proceedings or recently opened state statutes of limitations in six dioceses. Twenty-five minors reported alleged sexual abuse by clergy, with two of them substantiated and 11 unsubstantiated.

StoneBridge also reported "continued hesitation and/or reluctance" by dioceses to participate in parish audits, which are optional. Less than half of all dioceses and eparchies, 85, indicated to auditors they performed regular parish audits, with 22 indicating they do so on an "as needed" basis. Twenty-three dioceses participated in StoneBridge's parish audits as part of the 2016 audit.

"We continue to emphasize that parishes and schools represent the front lines in any diocese’s or eparchy’s Charter compliance efforts," the StoneBridge auditors stated in their report. "If a diocese or eparchy does not conduct some form of audit of its parishes and schools — whether by a diocesan/ eparchial representative or an external auditor such as StoneBridge — the bishop or eparch cannot be sure that Charter-related policies and procedures are clearly communicated and effectively carried out."

Marasco said that the benefit of parish audits is that allows for validation "that all the processes and procedures are working as they're intended. … There's some monitoring you can do, and we do look at that from the chancery. But it's always nice to get out in the field and talk to the folks who are on the front line."

Asked if there has been discussion within the bishops' child protection committee to revise the charter to mandate parish-level audits, Nojadera said in an email, "There is always discussion on ways of improving the Charter. The Charter is a living document."

Will we ever know the truth?

Editorial: It's past time for Vatican report on McCarrick's shameful rise