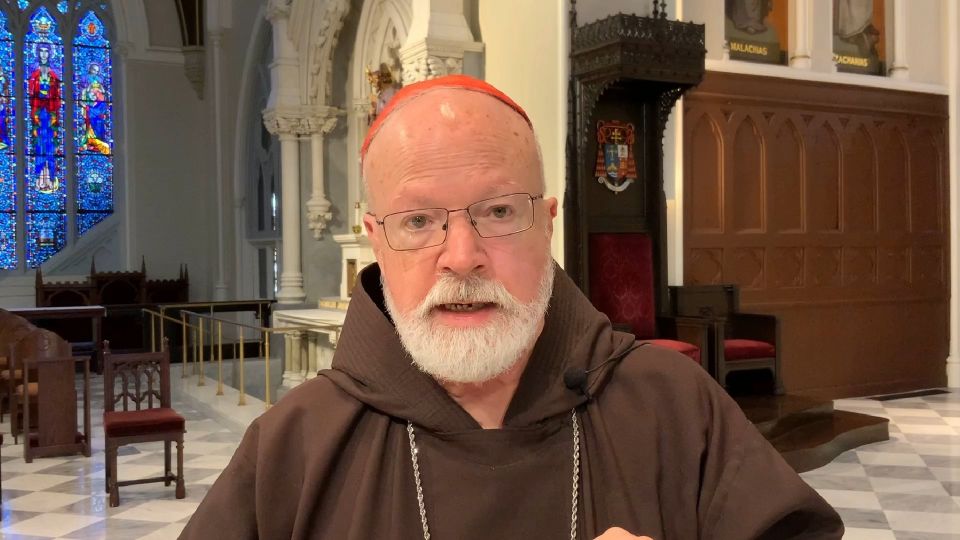 Boston Cardinal Seán P. O'Malley, president of the Pontifical Commission for the Protection of Minors, addresses the general assembly of the Italian bishops in a video message released May 25, 2022. Cardinal O'Malley encouraged the bishops "to undertake a constructive process of review, of reform and of reconciliation" in view of calls for a national study on clerical sexual abuse. (CNS photo/courtesy Pontifical Commission for the Protection of Minors)

VATICAN CITY — As Italian bishops debated how to respond to calls for a nationwide investigation into clerical sexual abuse and the way accusations have been handled, U.S. Cardinal Seán P. O'Malley of Boston, president of the Pontifical Commission for the Protection of Minors, encouraged them to move forward.

"You have a unique opportunity to develop an honest and nondefensive dialogue with all those involved, at the national and local levels, who are willing to undertake a constructive process of review, of reform and of reconciliation," the cardinal said in a video message played May 25 at the spring meeting of the Italian bishops' conference.

The video and a text of the cardinal's remarks were released by the commission.

"As you chart the way forward, the history of abuse in our church will come into the light more and more," the cardinal told the bishops. "This has been a normal process in every country where we have seen this happen."

But the cardinal also insisted that looking back and reporting on what happened "is not the same as making a judgment on what happened in the past, especially about who made mistakes or who was also caught in an imperfect situation."

"Sexual abuse has always been wrong, for sure," he said. "But how pastors have dealt with these accusations, while inadequate in some cases, should not be seen through the lens of what we know today."

Before the bishops' meeting began May 23, groups that monitor abuse cases and advocate for survivors called for an independent study into the abuse scandal in Italy and insisted it go back decades. Some bishops, however, wanted any study conducted to be done by the conference's office of child protection, working with its  diocesan counterparts, and many thought the study should be limited to cases reported and handled recently.

"One of the strongest desires of the human heart is to feel safe. Our people want to feel safe in our church, and that means they want to be strengthened in their faith by their pastors," Cardinal O'Malley said.

The "work of listening, healing and justice" is part of the "fundamental ministry of a priest and pastor," he said. Priests and bishops are called "to welcome people and to be instruments of God's grace for those who have been hurt by life, even when that hurt comes from within our own ranks."

Every plan of child protection, he said, must include: effective pastoral care of victims; clear guidance and training for church staff; accurate screening; "removal of perpetrators of abuse"; cooperation with police; "careful assessment of the risks existing for priests guilty of abuse -- for themselves and the community -- once they have been reduced to the lay state"; and "public verification of the protocols in place so that people know the policies are working."

"An audit and report on the implementation of the policies is very useful," the cardinal told the bishops.

From his decades of experience listening to abuse survivors and working on child protection measures, Cardinal O'Malley said that "sometimes, and perhaps rightly so, it seems there are no adequate steps we can take to make things right for those who have been abused."

"It is perhaps the most difficult part of being a pastor: knowing that our listening and our efforts at healing and justice will likely fall short of what survivors are looking for," he said. "It's a sober reminder that ultimately only God's grace can make whole what sin has broken."

Still, the cardinal insisted: "We have nothing to fear by telling the truth. The truth will set us free. Acknowledging people's stories of abuse, listening to survivors and committing to working together is not easy, but I can tell you after 40 years that it is the only way."

In closing, Cardinal O'Malley told the bishops they could not overlook the fact that "it is highly likely that there are some among your priests who were abused by members of the clergy as children or perhaps in their seminary years. Remember that there are services available and that you are not alone."

"The reality of abuse is always close to all of us, unfortunately, whether in our families, our communities or, yes, even in our church," he said.

Baby Jesus was a Dreamer in Egypt

Mandela was ever-mindful of church role in South Africans' struggle