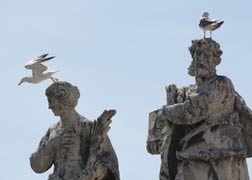 A bird takes off from a statue of a saint on the colonnade prior to Pope Benedict XVI's general audience in St. Peter's Square at the Vatican June 9. The saints on the colonnade have been dirtied by centuries of grime and pitted by the elements. They are being restored in a four-year renewal of the colonnade. (CNS photo/Paul Haring)

A Vatican spokesperson has confirmed that permission has been denied to film aspects of an Oct. 31 gathering of sex abuse victims in Rome that may occur inside St. Peter’s Square, but insists the ban is standard practice rather than an effort to squelch coverage of the event.

The gathering is billed as “Reformation Day,” and organizers plan to launch a petition calling on the United Nations to include the systematic sexual abuse of children as a crime against humanity.

Two American survivors of abuse, Bernie McDaid and Gary Bergeron, are the primary organizers of the Oct. 31 event, which aims to bring together victims of sexual abuse from various nations to press the Catholic church for reform. The plan is to assemble outside the grounds of the Vatican, near Castel Sant’Angelo, then process to St. Peter’s Square.

Victims may enter the square individually, though they’ve been denied permission to gather as a group on Vatican grounds.

On Oct. 26, Bergeron and McDaid issued a press release charging that the Vatican has told media outlets they will not be able to cover anything that happens on Vatican property.

The press release asserted that the Vatican is “trying to stop people around the world from joining us in spirit,” saying the attempt to stop filming of whatever happens in the square is “quite frankly, enough.”

An official in the Vatican’s Pontifical Council for Social Communications, Lombardi said, has told someone in contact with the group that “interviews and filming aren’t usually permitted in St. Peter’s Square.”

Lombardi said that’s “a general rule that’s always been the case,” and said that even he follows the same protocol.

“When I give interviews to TV crews that ask me for them, I always do it outside the boundaries of St. Peter’s Square,” Lombardi said.

Bergeron and McDaid say that “groups of survivors and individuals are coming from over a dozen countries” to take part in the Oct. 31 gathering. It’s not clear precisely how many people may take part.

Information on the event may be found at www.survivorsvoice.org.