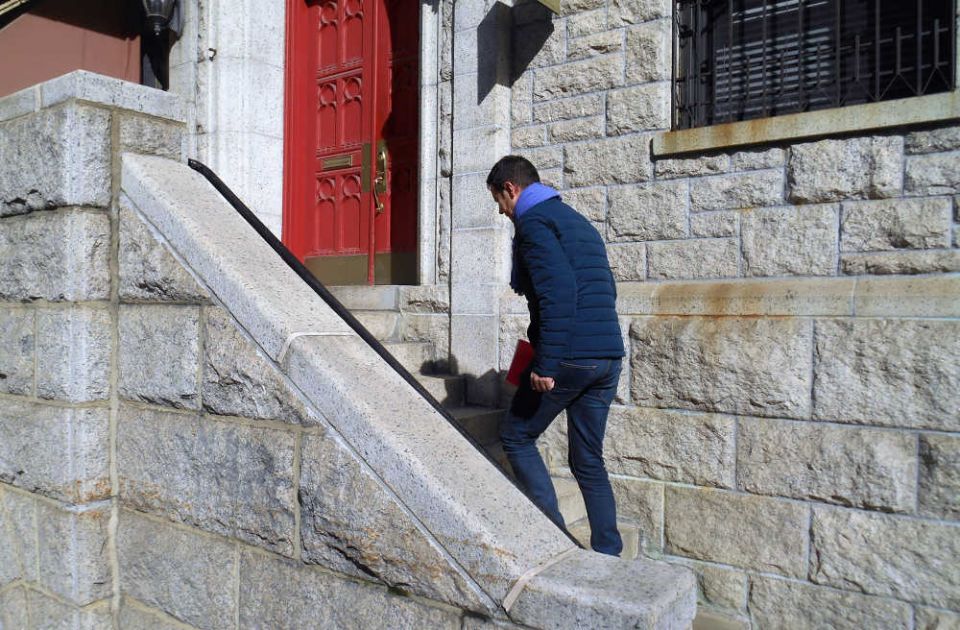 New York — Juan Carlos Cruz, who has accused a Chilean bishop of witnessing and covering up for sex abuse he endured as a minor, met here Feb. 17 with Archbishop Charles Scicluna, a representative of Pope Francis. "For the first time, I felt someone was listening," Cruz said after emerging from the three-hour meeting.

On January 30, the Vatican announced that Scicluna, a Maltese archbishop, would collect testimony about Bishop Juan de la Cruz Barros Madrid of Osorno, Chile. Barros has been accused by Cruz, who now resides in the Philadelphia area, and two other men, of witnessing Fr. Fernando Karadima sexually abuse them when they were minors.

Scicluna will travel to Chile to continue the investigation. Karadima, now 87, was a charismatic church leader in Chile. A Chilean court declined to rule on the case because of a statute of limitations, with a judge emphasizing that the case did not lack for evidence.

Despite the accusation, Barros was appointed bishop of Osorno by Francis in 2015. The appointment caused outrage among many Chilean Catholics, and was a source of discord, including public demonstrations, during the pope's visit to the country in January.

The pope said he had never heard any evidence against Barros, even though the Associated Press has produced copies of a letter sent to the pontiff detailing the accusations.

Cruz said that Scicluna, the main Vatican troubleshooter on sex abuse cases, wept as he heard his account.

"He was moved by what I said," said Cruz. Scicluna's demeanor, said Cruz, was one of "openness and transparency," a far different response than what he said survivors have received from Chilean church authorities. 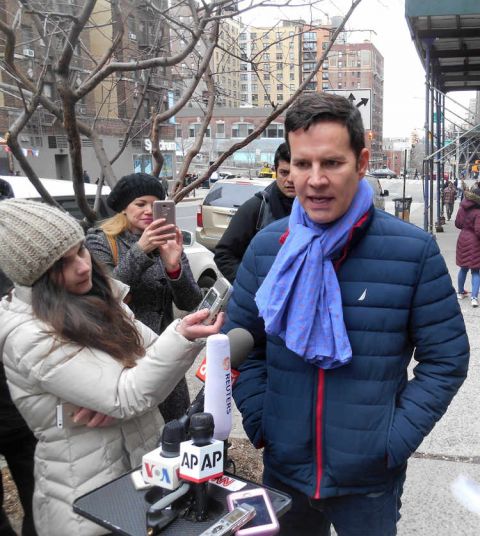 Barros and other Chilean church leaders, including bishops Andrés Arteaga, an auxiliary in Santiago, Tomislav Koljatic of Linares,  and Horacio Valenzuela of Talca, have denied they knew about the abuse before the accusations were made public. Barros and Valenzuela denied the accusations most recently in an interview with Crux, in a story published Jan. 17.

While pleased with the meeting Cruz cautioned, however, that survivors of church sex abuse cannot be assured of justice. "I don't know what the outcome will be," he said of the meeting here, held at Holy Name Church rectory on Manhattan's Upper West Side.

He said that his case has received heavy media attention, a point buttressed by the presence of reporters from Reuters, Associated Press, CNN and Chilean television who waited for Cruz to emerge. Scicluna did not address the media.

"Thousands of cases in the world need the same attention that this one has received," he said during the press conference, which he conducted in both English and Spanish.

"It's not enough to say you are sorry. There should be a policy that every survivor in the world should be heard. Everyone should receive the treatment I received today," he said.

Cruz said the meeting lasted as long as it did because the discussions included not only the Barros case but the response of the Chilean hierarchy to other sex abuse cases as well.

"I am aware that the pope is taking this seriously," he said, adding, "I have been very hopeful today." 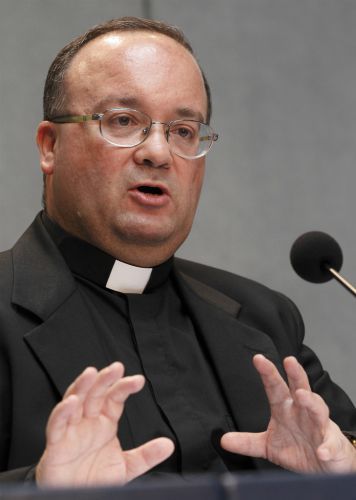 Today as Scicluna met Cruz, the Vatican announced it was reconstituting the Pontifical Commission for the Protection of Minors, the mandate of which had lapsed in December.

Cruz is one of several Chilean men who went public in 2010 with accusations against Karadima, a highly influential cleric in Chile counting bishops and priests among his disciples, including Barros.

The controversy reignited in January 2015 when the Vatican announced Barros, who was the bishop serving the Chilean military ordianariate, would become bishop of Osorno, a small diocese in southern Chile. Laity and clergy strongly objected to the appointment because of Barros’ association with Karadima and accusations that he and others in Karadima’s circle knew about the abuse but did nothing about it.

The Associated Press reported earlier this year that Barros' appointment was also opposed by most of Chile’s Catholic hierarchy, but Pope Francis pushed ahead with the appointment, claiming that he had not seen any evidence against Barros.

Barros and the others have steadfastly denied they knew about the abuse before 2010.

The controversy overshadowed Francis’ January trip to Chile during which he strongly defended Barros, going so far as saying on two occasions that accusations against Barros were “calumny.”

Cruz said then that he felt like he had been slapped when he heard those words. "I was upset," he said, "and at the same time I couldn't believe that someone so high up like the pope himself could lie about this."

Associated Press reporting has revealed that a letter written by Cruz detailing how and when Barros and others witnessed Karadima kissing and fondling him and others was hand delivered to Pope Francis in April 2015.

Cruz had given the letter to members of the Pontifical Commission for the Protection of Minors and they in turn met with Francis' top abuse adviser, Boston’s Cardinal Sean O'Malley, asking him to give the letter to Francis.

"When we gave him [O'Malley] the letter for the pope, he assured us he would give it to the pope and speak of the concerns," then-commission member Marie Collins told the AP. "And at a later date, he assured us that that had been done."

From 2002 until 2012, Scicluna was a “promotor of justice” in the Vatican’s Congregation for the Doctrine of the Faith, responsible for prosecuting cases of clergy sexual abuse. He is widely seen as the architect of the more aggressive approach to the clergy abuse crisis that emerged in after 2001.

Shortly after his former boss in the doctrinal congregation, Cardinal Joseph Ratiziner, became Pope Benedict XVI in 2005, Scicluna was dispatched to investigate allegations about abuse committed by Fr. Marcial Maciel Degollado, founder of the Legionaries of Christ. Allegations against Maciel had been accumulating for decades, but as head of the wealthy and well-connected Legionaries, the accusations had gone no where. Several months after Scicluna began the investigation, Benedict ordered Maciel to "a life reserved to prayer and penance, renouncing any public ministry."

In April 2014, after Scicluna had left the Vatican and become an archbishop in Malta, Francis dispatched him to Scotland to collect testimony in a case against Cardinal Keith O'Brien, the former archbishop of St. Andrews and Edinburgh, who resigned in 2013 after admitting to sexual misconduct.

Read this next: Francis' commitment to abuse survivors in question 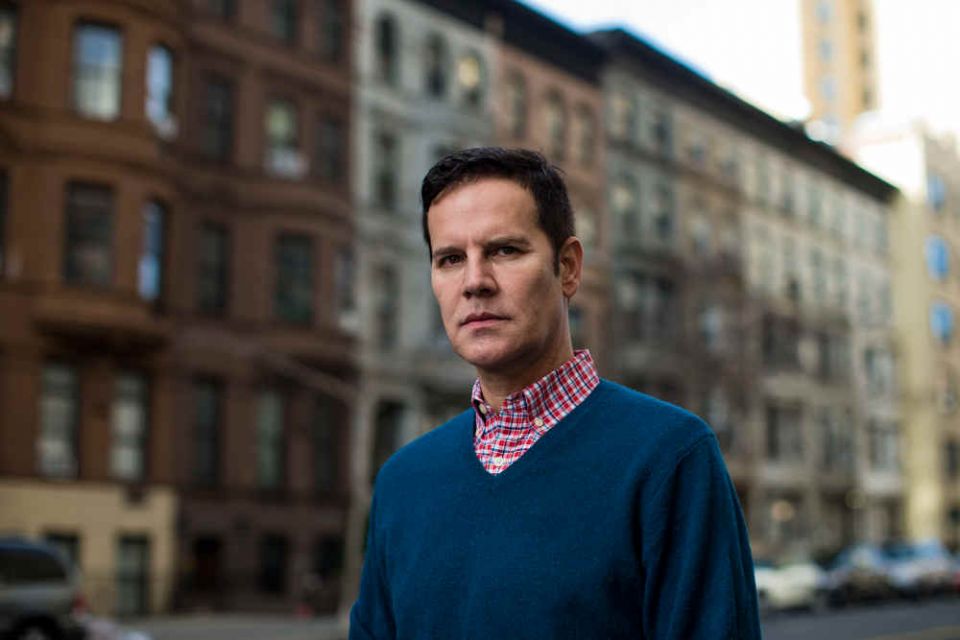