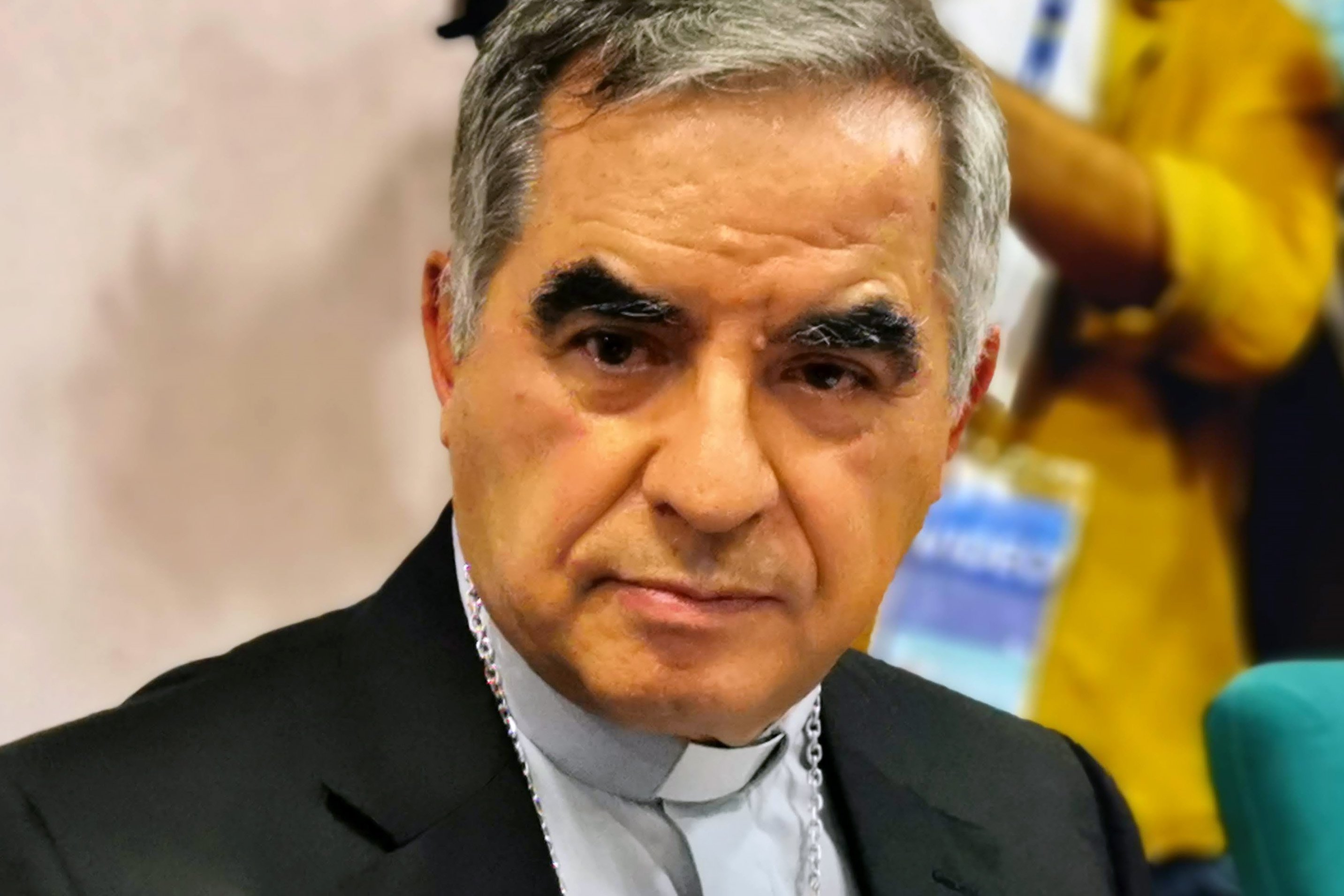 Cardinal Angelo Becciu is pictured during a news conference in Rome in this Sept. 25, 2020. (CNS photo/Junno Arocho Esteves)

VATICAN CITY — Taking the stand for a second time at his Vatican trial, Cardinal Angelo Becciu spent more than two hours reading a statement in which he claimed accusations of financial impropriety were an attempt to stain his reputation.

At the trial May 5, Cardinal Becciu said he felt "immense pain" when Pope Francis forced him to resign in 2020.

"I was thrown on the front page of newspapers, almost like a monster," he said. "Many believers around the world have been troubled in their faith" by the accusations against him.

Cardinal Becciu said claims that he embezzled an estimated 100,000 euros and gave them to Spes, a Caritas organization run by his brother, Tonino Becciu, in his home Diocese of Ozieri, Italy, was "the mother of all my misfortune."

"None, not one of my relatives enriched themselves with that money," he said, adding that his brother, who served as president of Spes from 2005 to 2016, is an associate of the organization and "earned money only as a religion teacher."

As for his involvement in the Vatican Secretariat of State's investment in a London property development project that incurred millions of dollars in debt, the cardinal said accusations that he misused Vatican funds were "unfounded."

At the time of the investment, then-Archbishop Becciu served as "sostituto," the No. 3 position in the secretariat.

Cardinal Becciu told the court, "There was never any objection" to the property deal from Pope Francis and Cardinal Pietro Parolin, Vatican secretary of state. "In fact," he said, "they were happy when it went well," initially producing nearly 10 million euros in annual returns.

Referring to Msgr. Alberto Perlasca, the prosecutor's chief witness and former head of the Vatican Secretariat of State's administrative office, Cardinal Becciu said he was an "irritable and cantankerous" subordinate who hoped "to become an apostolic nuncio."

The cardinal testified that Msgr. Perlasca asked for his help after Pope Francis removed him from the Secretariat of State and appointed him substitute promoter of justice at the Apostolic Signature in 2019.

Believing that he was removed due to his involvement in the failed investment in the London property, Msgr. Perlasca's demeanor changed, and he would act "very strange and temperamental" as well as ask "many questions about me and my activities," Cardinal Becciu claimed.

The cardinal also testified about his dealings with Cecilia Marogna, an Italian political analyst he allegedly hired, but whom the Vatican court has accused of embezzling money through a humanitarian organization she ran in Slovenia.

According to several documents sent anonymously in 2020 to the Italian news program, Le Iene, the Vatican Secretariat of State sent five payments totaling an estimated 500,000 euros to Marogna's organization.

While the money allegedly sent by the Secretariat of State was meant to help fund the release of Catholic hostages, Le Iene reported that the money was instead used for purchases at several high-priced fashion boutiques, including Prada, Louis Vuitton and Moncler.

According to a January 2021 report by The Associated Press, prosecutors said text messages were sent by Cardinal Becciu authorizing thousands of euros to Marogna's organization to secure the release of Sister Gloria Cecilia Narvaez, a Colombian nun kidnapped by jihadist militants in Mali, despite the fact the cardinal was no longer working at the Secretariat of State at the time.

In another text message, Cardinal Becciu said the pope was aware of the situation and wanted things to be kept "in great secrecy," AP reported.

Nevertheless, it remains unclear whether the payments sent to Marogna in 2018 and 2019 had any effect on the nun's release from captivity in 2021.

Cardinal Becciu told the court he was offended by reports of a romantic affair between him and Marogna, calling them "insulting claims of the lowest nature that were also injurious to my priestly dignity."

Marogna, he said, was consulted about securing Sister Gloria's release, and she organized a meeting with Cardinal Becciu and the British intelligence agency.

"Every step of this operation was in agreement with the Holy Father," whom he updated regularly, the cardinal said.

Lastly, Cardinal Becciu complained about public accusations that he allegedly sent hundreds of thousands of euros to accusers of Australian Cardinal George Pell, who was convicted but subsequently exonerated for sexual abuse.

"For over a year, I underwent public pressure with the accusations of having paid for false testimonies against Cardinal Pell," he said. The cardinal also said Cardinal Parolin confirmed that "it did not happen."

In a letter dated April 29, 2021, he said, Cardinal Parolin confirmed that the money in question was used to purchase an internet domain name and that Cardinal Pell "continued to raise doubts about the transfer of $2.3 million in Australia, suspecting that those funds were used by Cardinal Becciu to negatively influence the penal process for abuse of minors."

"I regret that Cardinal Pell has stumbled into this misunderstanding," Cardinal Becciu said.