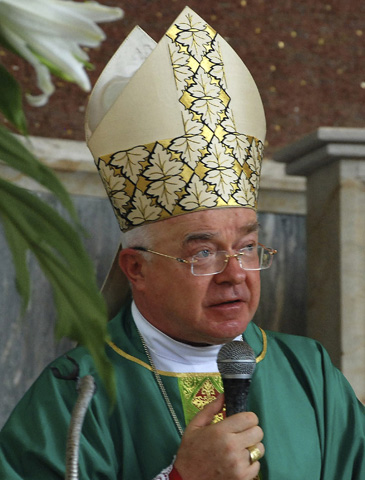 Catholics in Poland are watching with interest the case of the Polish archbishop who has been laicized for sexually abusing minors while he served as papal nuncio to the Dominican Republic.

Most believe that Jozef Wesolowski, 66, a veteran Vatican diplomat who served as nuncio to the Dominican Republic from 2008 until he was recalled in August 2013, will be tried in a Vatican court.

The Vatican announced June 27 that a canonical court had investigated Wesolowski on charges of sex abuse and concluded by dismissing him from the "clerical state," depriving him of all rights and duties associated with being a priest except the obligation of celibacy. Wesolowski would face a criminal trial under the laws of Vatican City State, the Vatican said at the time.

But the Vatican's spokesman Jesuit Fr. Federico Lombardi, opened the possibility that Wesolowski could be extradited when he released a statement Aug. 25 that said when Wesolowski's diplomatic activity ceased, so did his immunity.

Lombardi also said that Wesolowski was appealing of his laicization and that criminal proceedings will ensue "mostly likely in October 2014 ... as soon as the canonical sentence becomes definitive."

Last year, the Vatican refused extradition requests from prosecutors in the Dominican Republic and the Polish government. Poland's ambassador to the Holy See told Religion News Service on Aug. 27 that Warsaw is considering a fresh request to extradite Wesolowski.

"Without doubt Poland considers the acts that the archbishop is alleged to have carried out as particularly repugnant and Pope Francis' firm approach to that type of crime has won great respect and full support in Poland," Ambassador Piotr Nowina-Konopka told RNS.

The Jesuit priest who heads the office of child protection for the Polish bishops' conference, Fr. Adam Zak, said in a telephone interview that the Vatican should try Wesolowski because he is a Vatican citizen and no state should wave that jurisdiction.

"As far as I know the Holy See and the Vatican have been cooperating in this case with the state and the church in the Dominican Republic," Zak said.

Fr. Zenon Hanas said in an email to NCR that the decision about venue should come from talks between the Dominican Republic and the Vatican and be based on respect for international law.

However, a trial in the Dominican Republic would counter media suspicions that a Vatican trial would be a cover-up, added Hanas, a lecturer at the Institute for Media Education at the Cardinal Stefan Wyszynski University in Warsaw.

Zbigniew Nowsowski, editor and chief of the Catholic monthly Wiez, dismissed reports that the defrocked priest would be tried in Poland. "The crimes were committed in the Dominican Republic, not in Poland. That's why he will not be tried here."

Nowsowski said there was popular condemnation in Poland of the former papal nuncio.

The only dissent from this condemnation from the ultra-conservative Radio Maryja, which claims Wesolowski was defamed as a Mafia plot financed by drug money.

Gazeta Wyborszka, Poland's largest newspaper, suggested in a July 2 article that justice would be better served if Wesolowski were tried outside the Vatican but also acknowledge there will be pressure to keep it contained inside Vatican walls.

The article quoted Pawel Borecki of the Department of Religious Law at Warsaw University: "The Vatican will seek that this case does not go beyond its borders. Wesolowski is a high-ranking diplomat. He has knowledge of how the Roman curia works. He may also know about pedophilia in the church and if other high-ranking priests are involved in the crime. In a trial abroad he could reveal everything. Therefore, we can expect that the Vatican will not release him and it will hand down a severe punishment."

Fr. Grzegorz Kramer, a Jesuit with a popular blog, applauded Pope Francis' zero tolerance for sexual abuse by priests, but cautioned about the church releasing too much information on the Wesolowski case.

"Not all the activities of the Pope and the Synod of Archbishops can be publicized," he said in an email. "Taking care of matters does not depend on the amount of information the public receives."

In June, at a Krakow conference on pedophilia, Zak presented research that showed 19 Polish clergymen were convicted of child abuse between 2010 and 2013.

[Donald Snyder is a freelance writer who worked at NBC for 27 years as a news producer. He retired from the network in 2003. Catholic News Service and Religion News Service contributed to this report.]

A version of this story appeared in the Sept 12-25, 2014 print issue under the headline: Venue debated for trial of former nuncio.