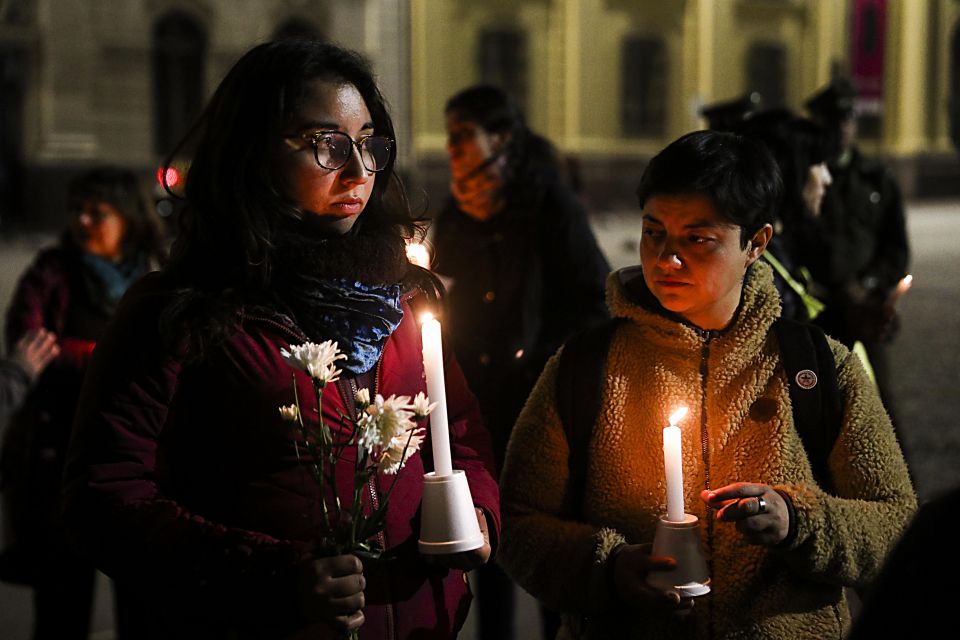 Demonstrators hold candles and flowers Aug. 20 in front of the Metropolitan Cathedral of Santiago, Chile. The demonstration was held as a protest against sexual abuse committed in the Chilean Catholic Church, in an event organized by the Network of Survivors of Ecclesiastical Abuse in Chile. (CNS/EPA/Alberto Pena)

Vatican City — As revelations of the sexual abuse of minors and vulnerable adults by clergy continue in Chile, an archbishop said that the church can no longer ignore the suffering of victims.

In a pastoral letter published Sept. 10, Archbishop Fernando Chomali of Concepcion said the Catholic Church in Chile must cooperate with authorities to uncover the truth, and it can no longer succumb to the temptation "of looking the other way and saying, 'its other people (who are the problem), not me.'"

"We must obey the law because we are not above the norms that govern the country," Chomali said.

The 20-page pastoral letter, titled "Living the Gospel in Times of Crisis," was published several days before Chilean prosecutors conducted a raid of offices in four dioceses, including Concepcion.

Chomali said the aftermath of decades of abuse committed by members of the clergy in the country have turned a once vibrant church that "was a voice for the voiceless" into a social pariah.

"Today we are -- for a growing percentage of the population -- a cause of scandal, of profound questioning, of much distrust and little credibility," he said.

The horror of sexual abuse, as well as abuses of power and conscience, he added, could have been avoided, particularly if the church had reviewed its process for selecting candidates for the priesthood.

"Those who abused should never have been allowed to enter the seminary, let alone be ordained," the archbishop said.

Renewing his commitment to provide a safe environment, Chomali said that while "this time has been of much pain, it also opened a path toward the truth."

Regarding the culture of cover-up that allowed for abuses to persist for decades, the archbishop said that behind those abuses there was a "corrosion of the social and ecclesial fabric" within the church that led to "a superficial spiritual life."

"So many of us consecrated people have the temptation of allowing ourselves to be deified and we end up believing we are superior to others," he said. The consequence is a loss of the "apostolic zeal" that led them to take vows in the first place.

Clericalism, he added, has left the church "disfigured" and has caused "much destruction."

Echoing Pope Francis' call to discern immediate and long-term steps, Chomali listed seven "concrete measures," to address past and current cases of abuse and restore the trust that has been lost.

Among the initiatives was to turn the archdiocese's Pastoral Office of Complaints and the Commission for the Prevention of Abuses into an independent entity and move its location outside the chancery offices so that those who wish to report "can do so with more ease and confidence."

He also said the archdiocese would implement transparency measures, particularly in seminaries and houses of formation, as well as in the judicial and canonical procedures that judge cases of abuse.

By confronting its past, he said, the church can become more "humble, simple, understanding and work to better accompany those who suffer."

Once the truth is revealed, Chomali said, "once justice is made for those who have suffered abuse and once it is repeated with clarity that there is no space in consecrated life for those who abuse, we can look toward the future with hope."

Accountability | When it comes to abuse, church isn't above the law, Chilean archbishop says