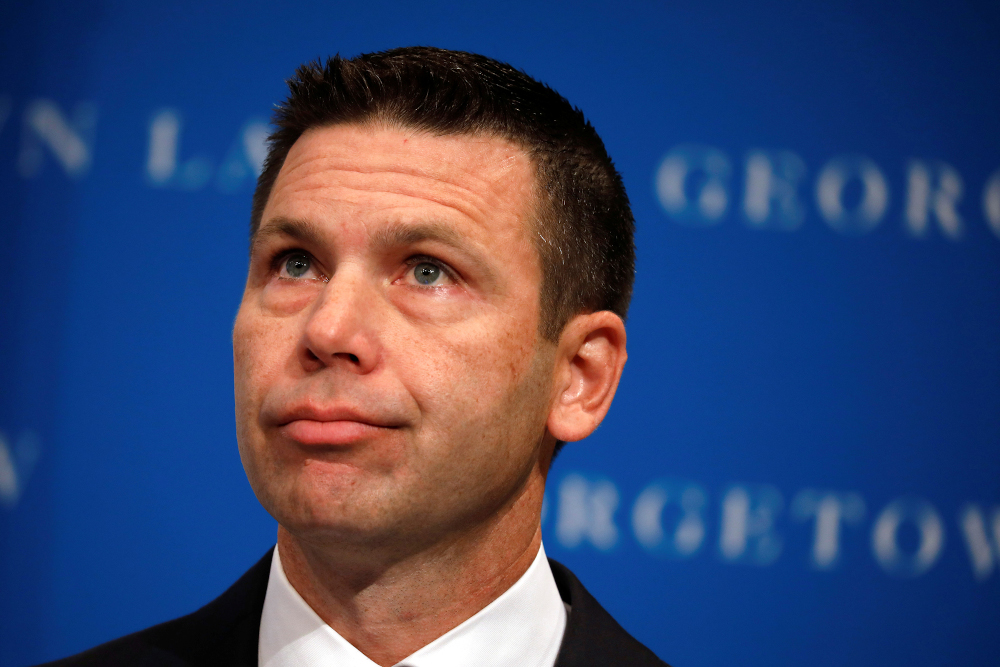 Acting Homeland Security Secretary Kevin McAleenan is seen Oct. 7, 2019, at the 16th annual Immigration Law and Policy Conference at Georgetown University Law Center in Washington. He was the keynote speaker but was shouted off the stage by protesters. The daylong conference brought together immigration and civil rights attorneys, policy experts, immigration reporters and activists. (CNS/Reuters/Yuri Gripas)

Kevin McAleenan, the acting secretary of the Department of Homeland Security, could not get a word out.

He was supposed to be the keynote speaker at the 16th annual Immigration Law and Policy Conference at Georgetown University Law Center the morning of Oct. 7, but he'd barely said, "Thank you," before chanting protesters drowned him out for several minutes.

"There's lots to cover today. There are some very serious issues we can discuss today," McAleenan began.

A chant about the "jailing" of immigrant children resumed. "OK, thank you, have a good day!" he said and walked out of the lecture room.

The organizers of the conference — the Catholic Legal Immigration Network Inc., the Georgetown University Law Center and the Migration Policy Institute — later issued separate statements reacting to the protesters.

All said that while they oppose the Trump administration's immigration policies, they are committed to having dialogue among differing groups and "hearing from all sides," something that they said has always been a hallmark of the annual conference.

The panel discussion that came after the disruption of McAleenan's speech didn't draw any similar audience reactions, but it was seemingly impossible for the bitterness of partisan politics and President Donald Trump's harsh comments about immigrants not to seep in.

"I see some continuities between Trump and the previous administration," said Julia Preston, a writer for the Marshall Project and a former New York Times reporter. She thought Trump's rhetoric about a porous Southwestern border and "big beautiful wall" distracted from the reality of more immigration enforcement since the 1990s, particularly since the end of the President George W. Bush and President Barack Obama administrations.

"In terms of interior enforcement," she added, "Obama deported almost 3 million people. So the history of permanent, punitive family separation is not new with this administration." 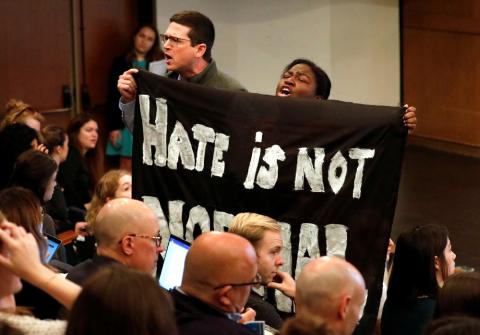 The main problem, Preston concluded, is that "Congress has failed, spectacularly, to take on its responsibilities to address ... the increasingly damaging dysfunction in our immigration system."

Of Trump, Preston said, he's "trying to change the core narrative that has animated our immigration policy for more than a century.

"At minimum," she continued, "we can say he regards immigrants and refugees with suspicion. You could take it further than that, but I think at minimum, we can say that."

"This," Preston concluded, "is a kind of unabashed nativism reinforced by the full authority of the White House. I've tried to go back in history and tried to remember when we've had this particular set of principles governing our immigration policy."

Use of executive power to "tinker with the immigration system" by creating more deportations had "led to a cascade of unintended consequences and chaos in the system."

Lomi Kriel, who covers immigration issue for the Houston Chronicle, criticized immigration officials for "releasing families en masse at border cities without coordinating with nonprofits," which created the impression of an invading horde. Trump's border wall, she pointed out, "does nothing. Money spent on the wall could be better used on immigration judges and asylum officers."

"Why did it take them so long to move basic humanitarian assistance?" asked Lorella Praeli, president of Community Change Action. "I think it started as a manufactured crisis, precisely because we've got to go back and look at the zero tolerance policy. This was of the administration's own doing, and I think that the goal was chaos.

Immigration officials are "constantly crying poverty when they're talking about baby diapers, but if there's a need for an extra 400-bed contract, the always find the money. They want to create a political problem ... so the laws are changed in their favor."

"Fixing the immigration system will help pressure on the border, said Casey Higgins, a former aide to Republican House Speaker Paul Ryan. But bipartisan conversations are now impossible, she complained. "Both sides have retreated so far into our corners." 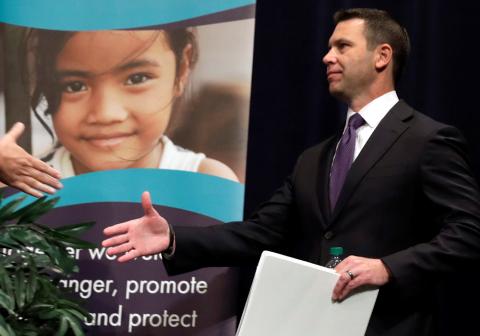 Acting Homeland Security Secretary Kevin McAleenan is seen Oct. 7, 2019, at the 16th annual Immigration Law and Policy Conference at Georgetown University Law Center in Washington. He was the keynote speaker but was shouted off the stage by protesters. The daylong conference brought together immigration and civil rights attorneys, policy experts, immigration reporters and activists. (CNS/Reuters/Yuri Gripas)

Praeli asked Higgins, "How do you see race as part of your analysis? It is Trump's mobilizing issue."

Higgins' response drew derisive audience laughter: "I don't think race is a factor. I just don't. I think for the majority of the party, they don't look at it through that lens."

"You can't have a conversation if you're saying all Republicans are racists," she added. "We need to find the members of both of those parties if we ever expect to move forward. It's unacceptable for us to say that as long as Donald Trump is president, as long as these things are happening, we cannot have a conversation."

"President Trump launched his (2016) campaign by calling Mexicans rapists," Praeli observed. "If that is not racist, if that is not suggesting a particular ideology and way of looking at the world, then. ..."

"This president is not a fact-based president, as we know," said Preston. "And this wall has been such a powerful symbol for him, and he's going to have plenty of photo opportunities in front of some big black structure down there, that I'm sure he's going to be using as the centerpiece of his campaign"

Praeli added, "His ability to manipulate the news ... is unmatched on the other side."

Afternoon sessions included discussions on Deferred Action for Childhood Arrivals and Temporary Protected Status for immigrants, and changes that have made arriving in the United States far more difficult for asylum-seekers.

In his statement about the protesters, Andrew Selee, president of Migration Policy Institute, said: "In a democracy, it is important to hear from all sides on public policy issues, including from those who are instrumental in developing and implementing policy, whether or not we agree with them, and MPI remains committed to that belief."

The protesters' actions, he said, "deprived immigration attorneys, service providers, journalists, advocates, business leaders, law students, and many others in the public who were in the audience from hearing his point of view and engaging in a meaningful dialogue."

CLINIC's executive director, Anna Gallagher, said for the past 16 years, the conference has been "a setting for dialogue among the various stakeholders in our field. This has been the case regardless of political alignments in Washington."

"This administration has advanced policies that are antithetical to our national ideals and interests and with which we strongly disagree," she said. "Yet CLINIC's affiliates who provide legal representation to low-income immigrants must function with the laws and policies as they exist.

"Immigrants who are subjected to these policies do not have the luxury of declining to engage with the current administration," she added, saying that CLINIC respected the views of those opposed to McAleenan's participation but organizers stood by the decision to include him.

The Georgetown statement echoed that reaction, adding: "Georgetown Law is committed to free speech and expression and the ability of speakers to be heard and engage in dialogue."

CLINIC spokesperson Patricia Zapor said most protesters inside the auditorium where McAleenan tried to speak were from an outside activist group called Credo. Students and others demonstrated in another part of the law center but not during the conference program.