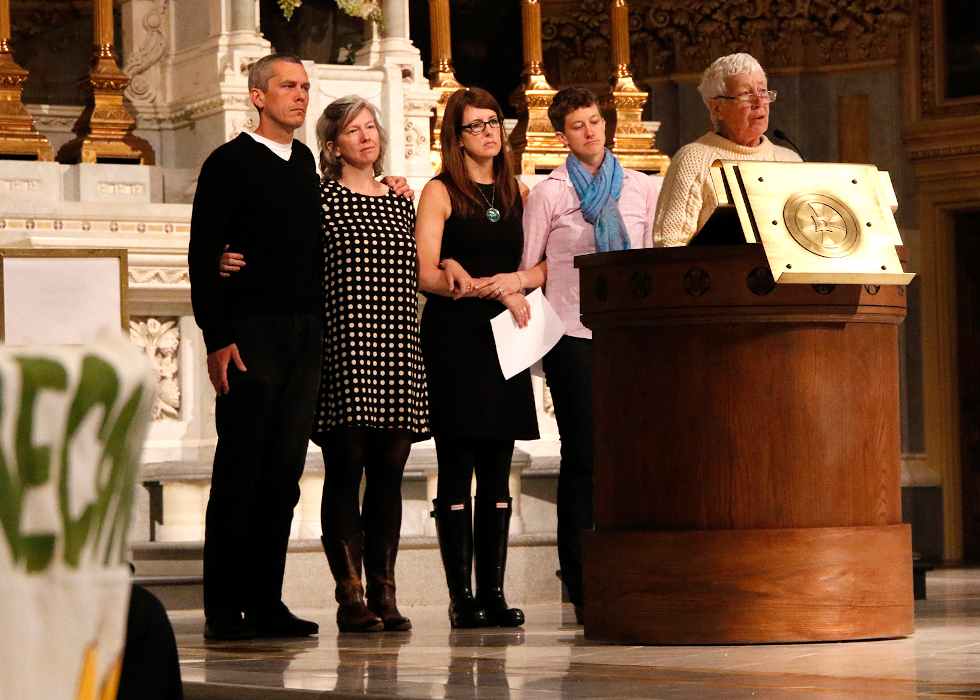 Elizabeth McAlister, right, is seen in this 2016 file photo at the Church of St. Francis Xavier in the Greenwich Village neighborhood of New York City. (CNS/Gregory A. Shemitz)

One of the seven Catholic peace activists convicted on charges related to entering a naval base in southeastern Georgia and symbolically damaging weapons systems will not return to prison for her role in the protest.

Liz McAlister, 80, of New London, Connecticut, was sentenced however, to three years of probation and ordered her to pay restitution at the rate of $25 per month as her part of the $33,500 the Navy said she and the other activists caused at the at the Naval Submarine Base Kings Bay on the night of April 4-5, 2018.

U.S. District Judge Lisa Godbey Wood also waived any fine, citing McAlister's voluntary poverty and minimal income during a June 8 hearing carried out by video conference from the U.S. District Court for the Southern District of Georgia in Brunswick.

Wood said that the more than 17 months McAlister served in jail following her arrest was sufficient for the crimes she had committed and declined to impose a stricter sentence behind bars.

McAlister, a former member of the Religious of the Sacred Heart of Mary, and the other activists call themselves the Kings Bay Plowshares. She told the court during the hearing she was motivated to act by Jesus' call to nonviolence and the Bible.

"I've tried to follow the instruction of the prophet Isaiah who clearly says we have to beat our swords into plowshares and spears into pruning hoods and to stop teaching war," McAlister said. "All my life I have spoken and written against nuclear weapons. I believe these are contrary to life. These are destructive to life on every single level."

A 12-member jury in the convicted the group Oct. 25, 2019, of conspiracy, trespass and destruction and depredation of property. Sentencing had been delayed for several weeks because of the novel coronavirus pandemic.

The sentencing for the six other Catholic peace activists is set for June 29-30 at the court.

The group said they chose the date of their action to mark the 50th anniversary of the assassination of the Rev. Martin Luther King Jr. and to "repent of the sin of white supremacy that oppresses and takes the lives of people of color here in the United States and throughout the world."

During the trial, federal prosecutors and military officials neither confirmed nor denied the existence of nuclear-tipped weapons at the base, as per government policy.