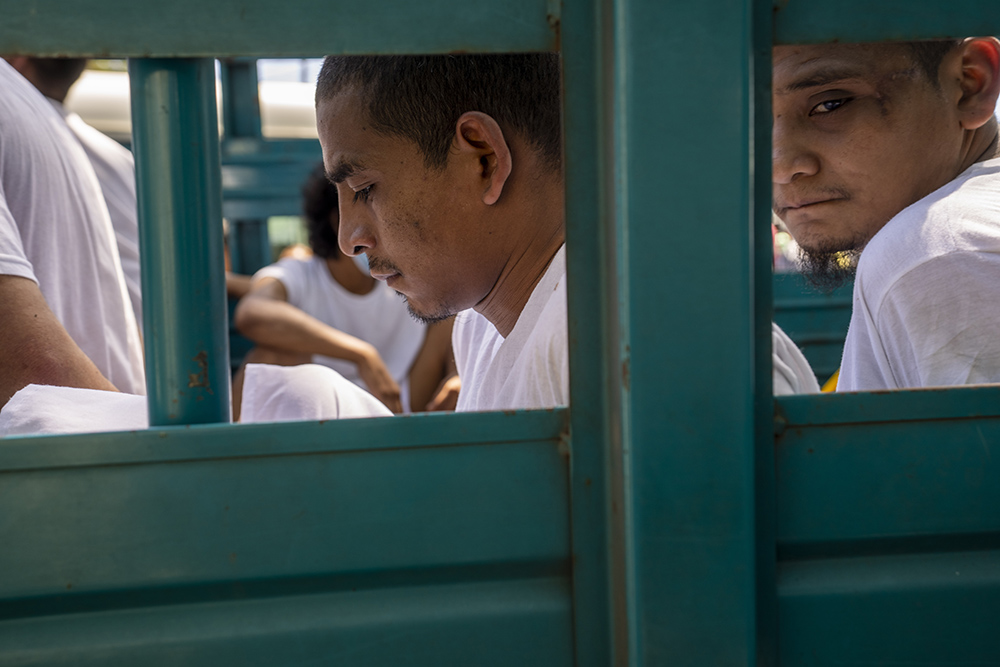 Men who were detained by the police are brought to a detention center in Soyapango, El Salvador, Oct. 12, during the "state of exception" the government has declared in a crackdown on gangs. (AP/Moises Castillo)

In March, President Nayib Bukele in El Salvador suspended a number of the country's constitutional due process rights as part of a crackdown on gang activity. Called a "state of exception," the suspension has led to the arrest of at least 55,000 people, many of whom are now being held in detention indefinitely.

Human rights activists and some Catholics — especially those involved in ecclesial lay movements — have been denouncing the apparent arrest, as part of the crackdown, of thousands of ordinary Salvadorans unconnected with gangs.

Their claims, however, have been mostly ignored by the Salvadoran government, leading them to take their case to international organizations, such as the Inter-American Commission on Human Rights.

The "state of exception" was approved by Congress — dominated by Bukele's allies — after a surge in homicides in March. Between March 25-27, at least 87 people were killed. The president's main goal was to launch a zero-tolerance-on-crime policy, putting an end to giant criminal organizations that have been controlling several areas of the country in past years, such as Mara Salvatrucha (or MS-13) and Mara (or Barrio) 18.

Originally valid for 30 days but since extended several times, the law suspended constitutional guarantees such as freedom of association and the secrecy of correspondence. The maximum administrative detention time went from three to 15 days.

"In reality, other rights are being violated. People are at times tricked to accompany police officers to their car — and only when they are inside it, they are informed that they are being arrested," said Irene Gómez, an attorney at Cristosal, a nongovernmental organization that promotes human rights in El Salvador, Guatemala and Honduras.

Since the beginning of the crackdown, organizations like Cristosal have attempted to help detainees, accompanying them at court hearings. But Gómez said the so-called "state of exception" is subverting the Salvadoran legal system. 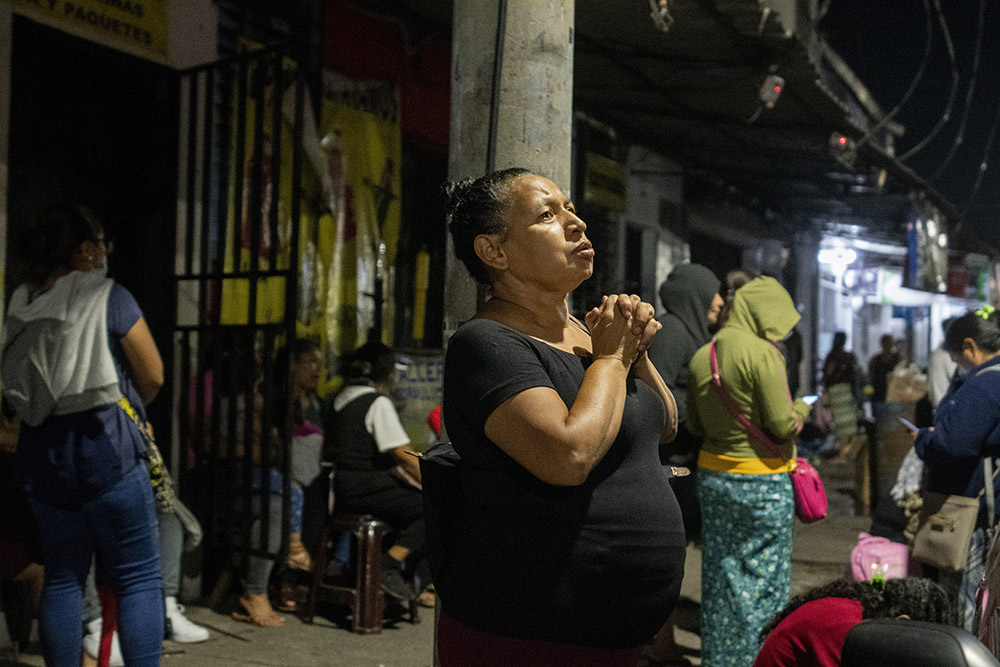 A woman prays as relatives wait for information about people arrested under the ongoing "state of exception," outside a detention center in San Salvador, El Salvador, Oct. 11. (AP/Moises Castillo)

"Hearings gather dozens of defendants at the same time, and lawyers are not allowed to talk to them — especially when the judge identifies them as members of NGOs," she told NCR. At the same time, people are never released on bail — they are kept imprisoned indefinitely while the inquiry on their alleged participation in a gang goes on.

"So, you really cannot provide legal assistance to anybody, because all basic guarantees are gone," said Gómez.

Ovidio Mauricio, who directs the Asociación de Derechos Humanos Tutela Legal "Dra. María Julia Hernández," a human rights organization that focuses on justice and due process concerns, said the usual legal process has been replaced by "an inquisitional kind of procedure."

"We are not informed of the judges' names. We call them the 'faceless judges.' They do not analyze the case files, they just determine that all the people in the hearing are guilty," Mauricio told NCR.

Samuel Ramírez, a leader of the Movement of the Victims of the Regime (known as MOVIR), said he has evidence that dozens of people were unfairly arrested.

"We have documents proving that those people were assiduous students or workers. But the judiciary just will not accept such evidence for consideration and prefers to keep them imprisoned as gang members," Ramírez said.

Gómez said that many of the detainees were racially and socially profiled by the police and armed forces.

"There is a pattern among the arrestees. They are usually short, dark-skinned young men with tattoos. People with more European features are not equally numerous among them," she said.

Many times, people with artistic tattoos — not connected to gang symbols — are arrested due to such prejudices, Gómez said. Innocent students and workers, as well as community leaders and social activists, have been targeted, too. That was the case for some members of base ecclesial communities in the region of Bajo Lempa.

The area of the southern part of River Lempa was occupied in 1992 by refugees of the Salvadoran civil war (1979-92) who had been living outside the country. It was an initiative boosted by the local vicar, the late Fr. Pedro Declercq. The communities, inspired by the once-strong Latin American liberation theology movement, keep gathering today.

"That is a zone notorious for its social and political organization. We cannot affirm that the detentions had political reasons, given that there are criminal gangs here, too. But community activists have been arrested," said José Salvador, one of the leaders of La Noria community.

There are estimates that some 300 people were detained there, and the communities say that at least 109 of them do not have any relation with illegal activities. One of them was Esmeralda Domínguez de Peña, a community leader and educator arrested April 19. The police refused to say what charges were being levied against her.

The communities have been denouncing the arbitrary arrests and requested the country's highest court to release all people who are wrongfully imprisoned. With their effort to make those cases known, there have been threats against their members.

Salvador said that policemen recently entered the house of two young activists who had been calling for the prisoners' release, and beat those individuals. They have since fled the country.

On Sept. 23, Tutela Legal and other nongovernmental organizations presented information about that case and others like it to the Inter-American Commission on Human Rights. The organizations also denounced the deaths of at least 73 detainees in prison. Some of them died as a result of lack of treatment for chronic diseases, Mauricio said. 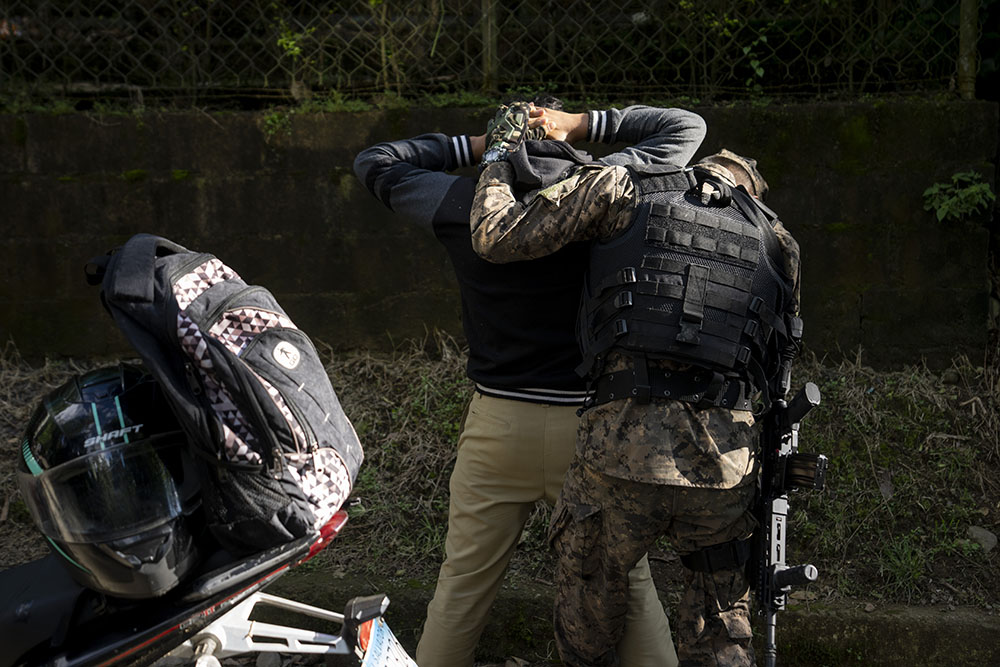 An army soldier frisks a motorcyclist at a checkpoint outside Comasagua, El Salvador, Oct. 6. (AP/Moises Castillo)

Ramírez said that among the detained are pregnant women, and some of them have given birth in prison. The overcrowding of the penal system is reaching absurd levels, he said, and the conditions inside are terrible.

"The water is barely drinkable and there is an incredible lack of hygiene," he said.

Fr. Fredis Sandoval, a member of Concertación Romero — a group that gathers members of different human rights organizations — said El Salvador's Catholic bishops have been demonstrating a dubious stance on the "state of exception."

"Most bishops have not formally positioned themselves against it. One of the exceptions was Bishop Oswaldo Escobar of Chalatenango, who met with several detainees' relatives and has been following at least 20 cases," Sandoval told NCR.

Sandoval also pointed out that the Central American University's Human Rights Institute has been manifesting a "prophetic voice" regarding the violation of constitutional rights by the government, and the Passionist congregation has been playing an important role as well.

But Bukele enjoys great political support, including among Catholics. Part of the hierarchy, Ramírez said, has been "passive" in relation to him.

"The Salvadoran church, with St. [Óscar] Romero's tradition, has always denounced injustice and taken the side of the oppressed. But now it has been tolerant with Bukele," said Sandoval.

When asked by NCR for comment about the "state of exception" and the mass arrests, a spokesperson for the Salvadoran bishops' conference referred to the conference's Twitter account. As of Oct. 24, the account had not mentioned the mass detentions that have occurred as part of the crackdown on gang activity. 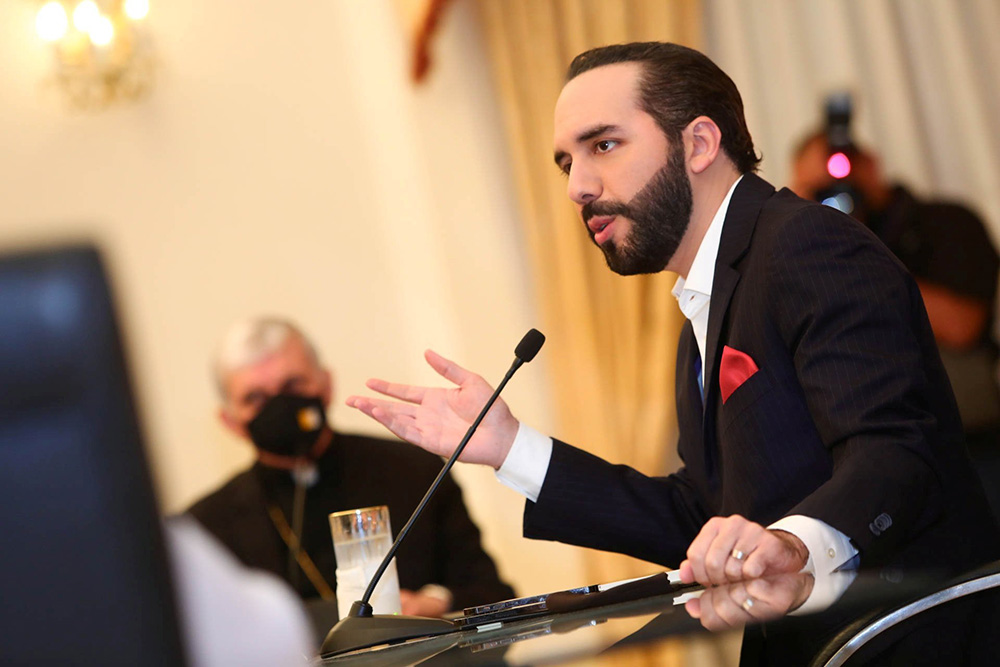 A prelate wearing a protective mask looks on as Salvadoran President Nayib Bukele takes part in a meeting at the Presidential House in San Salvador May 3, 2021. (CNS/Secretaria de Prensa de La Presidencia handout via Reuters)

Although the Salvadoran constitution forbids reelection, Bukele has said he will bid for a new term in 2024. The country's constitutional court, which is controlled by justices that were selected by Bukele, issued a ruling in September to allow presidents to seek reelection.

At the end of September, Archbishop José Luis Escobar of San Salvador told the press that the people want Bukele's reelection — and noted the court's decision.

The archbishop's declaration is facing criticism by human rights activists and members of ecclesial communities.

"In practice, he justified and approved Bukele's actions. We had asked for an audience with him in August and he refused to talk to us. We wanted to inform him about what is happening," Salvador lamented.

The ecclesial base community leader said that although the bishops' conference has issued a few statements critical of Bukele, "the church is not accompanying the victims nor investigating their cases."

Monica Rodríguez, a Salvadoran journalist, said it is getting riskier to denounce the "state of exception." She said she has endured trolling on social media and has had her WhatsApp account hacked.

"Attacks against journalists have been constant. Some of us have almost been arrested, and nine journalists had to leave the country," she said.

Rodríguez emphasized that Bukele's regime has extended the "state of exception" so many times — it is about to do it again for the seventh time — that it cannot be called "exceptional" anymore.

"It is already a permanent state," said Rodríguez.

A version of this story appeared in the Nov 11-24, 2022 print issue under the headline: Activists denounce human rights abuses of El Salvador's gang crackdown.