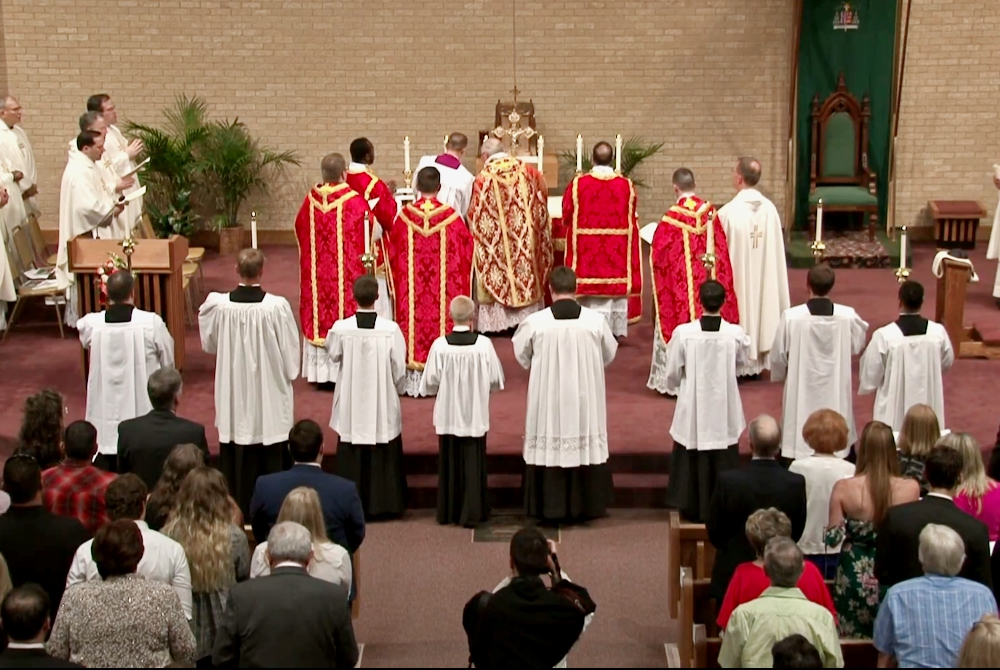 In this screenshot from a diocesan video, Mass is celebrated "ad orientem" during the July 2018 ordination ceremony in the Diocese of Madison, Wisconsin. (YouTube/Madison Diocese)

As the church has been tussling over liturgical practices since the Second Vatican Council, it's easy to anticipate criticism. So when Bishop James Wall of Gallup, New Mexico, announced in a July 22 letter that he would begin celebrating Mass in his cathedral ad orientem, that is, "toward the east," with his back to the people, his words leaned into the punch.

"I know this can be a contentious topic. To make changes to the way we pray can be difficult, especially when it comes to liturgical prayer," he wrote.

In announcing the change, Wall, 54, cited an April 10 open letter by Pope Emeritus Benedict XVI that addressed the sexual abuse crisis in the church, but also stressed how the worship of God impacts all other aspects of life. 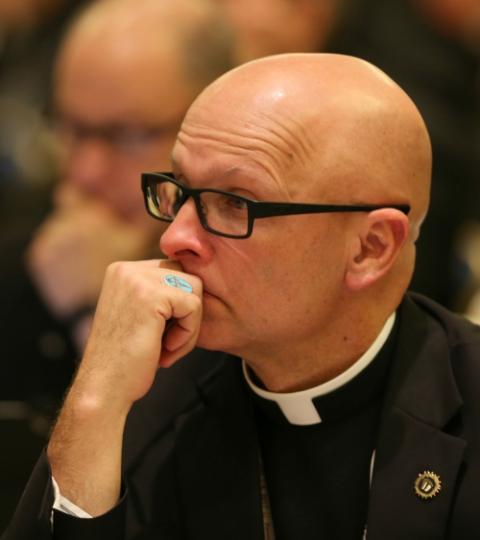 "This more than anything was why I was moved to make this decision regarding Mass ad orientem, and why I chose to use Pope Emeritus Benedict's letter as a springboard," Wall said via email.

Wall's move is not reflected in a national trend line. While bishops in Portland, Oregon, and Marquette, Michigan, have moved to implement widespread use of Gregorian chant in recent years, the last bishop to take the ad orientem turn was Bishop Robert Morlino of Madison, Wisconsin, who in 2016 announced a move similar to Wall's.

Morlino died in November 2018. The diocese's longtime director of worship, Patrick Gorman, shared that the bishop had taken care never to impose the practice on another priest, even the rector of the cathedral where the bishop celebrated in that manner.

"I think he chose to do that because he realized not every priest is comfortable with this," Gorman said.

But even a non-imposition creates expectations when the model is the bishop in his cathedral. Wall in Gallup admits openly that he is seeking to lead by example with the move, saying via email that he wants to move the diocese "towards a liturgical unity of sorts. For while the rubrics of Mass do allow for options — for legitimate diversity — this doesn't mean that the celebration of Mass from one parish to another ... should be radically different."

It's this diversity permitted in the conciliar texts and the Roman Missal, along with the bishop's role as the chief liturgist of his diocese, that allows for a move as this, noted Msgr. Richard Hilgartner, pastor of St. Joseph Church in Cockeysville, Maryland. Hilgartner is past president and CEO of the National Association of Pastoral Musicians and currently serves on its Board of Directors.*

"The way you celebrate the Easter Vigil isn't the same way you celebrate a weekday in ordinary time," said Hilgartner of why a Mass by a bishop at his cathedral can be celebrated more solemnly. "For centuries, there have been degrees of solemnity within the liturgy."

Hilgartner, who staffed the Divine Worship Office of the U.S. Conference of Catholic Bishops from 2007 to 2014, added that postconciliar liturgical rubrics are more simplified in terms of delineating "high Mass" from others, and so, "in some ways, to do some of these things is simply to carve that out."

In explaining his move in Gallup, Wall wrote, "I am trying to open the treasury of the Church's patrimony" rather than disrupt the prayer lives of the people of the diocese.

The need for catechesis was echoed by several liturgy experts, including Gorman in Madison, who said Morlino urged sensitivity among his priests to the noise such a practice creates for Catholics who've lived through the upheaval of reform and, prior to that, a church in which — for instance — women had no say.

"People who desire to worship ad orientem, it's one step on their way to involving themselves deeper in prayer," Gorman said. "I've talked to many of them. They say they pray more deeply in this way. They say it takes out the personality of the presider."

The communities who worship in this way tend to coexist with other Catholics, Gorman said, with conflicts coming "from the outside," that is, from Catholics — often with an internet platform — who form a strong preference for or against something, "and they're going to drive it home with everybody, telling them how bad the other side is and how right they are. And that is a lack of humility."

Brian MacMichael, director of worship for the Diocese of Fort Wayne-South Bend, Indiana, agreed that technology has exacerbated the environment for Catholics who want to fight about liturgy. In the past, "we couldn't know what was going on in real time," he said of history as recent as the debates of Vatican II and being able to form opinions and to pontificate on working documents. "There's a lot of noise today. It doesn't help."

Not a cudgel but a tool

MacMichael offered the frame "Is this helping to point us toward Christ?" in discerning liturgical matters. He warned against the tendency to approach liturgy as a commodity and the "gross oversimplification" on both sides of the debate to see their way as the answer to all that ails the church, the sentiment of "as long as you fix all this, they'll come back."

Hilgartner agreed that a healthy respect of others' preferences and faith journey are key: "How one person experiences the presence of God isn't necessarily going to be defined by one set of norms. And it's a big church."

"Liturgy's the battleground, and it's the one thing that's supposed to unite us," Gorman said.

He added that ongoing debates were "a silly fight." He said that different forms of the Mass draw people to the divine and enrich one another.

While using liturgy as a weapon is antithetical to its purpose, Hilgartner noted that turning to the liturgy at a critical moment in the life of the church — as the bishop of Gallup characterizes his move — is enshrined in the central place Vatican II gave to worship.

* This article has been edited to update Hilgartner's role with the National Association of Pastoral Musicians.

A version of this story appeared in the Sept 6-19, 2019 print issue under the headline: 'Ad orientem' tussles turn on matters of community, liturgical diversity.