A liturgical canonist and teacher who had admitted abusing a minor while serving as an associate pastor in the United States is no longer teaching at the Canadian pontifical university where he had been a full professor.

St. Paul University confirmed that John Huels is no longer teaching at the university, after Huels' victim contacted Ottawa Archbishop Terrence Prendergast and NCR ran a story about the abuse.

In the article that NCR published Sept. 12, survivor Michael Bland wondered if he would find justice amid the renewed attention to clergy sexual abuse, telling NCR that he had hope but little trust. "I think I have found healing, but I have not found accountability," he said.

Now, it seems he has found accountability, too.

Prendergast responded within four days to a Sept. 18 email from Bland, a psychotherapist in private practice in Chicago who served on the U.S. bishops' National Review Board. The archbishop informed him that Huels is no longer teaching at St. Paul University.

"I can assure you that we are striving to do justice for those who have been harmed by abuse and to bring about healing," Prendergast wrote to Bland. "Be assured of my prayers for you and all who have been victimized by clergy."

Bland had written to Prendergast, urging him to take action in light of the archbishop's recent letter to the faithful in which he said he was "heartbroken" by the sex abuse scandals and would "investigate allegations of abuse with transparency and integrity." The archbishop is also chancellor of the university.

"While we may share a similar heartbreak with the latest scandal in the sexual abuse crisis, I imagine our heartbreak is from different perspectives. I was sexually abused as a high school student by John Huels," Bland wrote.

When Bland was 15, Huels abused him while associate pastor at St. Joseph Parish in Carteret, New Jersey, which was staffed by members of the Friars Servants of Mary, known as Servites.

Bland revealed the abuse in 1994, nearly seven years after he himself had been ordained a Servite priest, and when Huels was elected to lead the Chicago-based province of the religious order.

After a second victim came forward, Huels resigned as provincial, and he eventually left Chicago and taught in Africa for several years. He was hired by St. Paul University in 1997. Bland left the priesthood in 1996.

In 2002, at the U.S. bishops' meeting in Dallas, Bland was one of several victims to share their stories, and his powerful testimony is said to have helped convince church leaders to adopt the "no tolerance" policy of the so-called "Dallas Charter." Without naming his abuser, Bland told the prelates: "The priesthood lost me, but kept the perpetrator."

Two months later, St. Paul University announced that Huels had temporarily left his posts as professor and vice dean of canon law and was on medical leave for severe depression. Then-Ottawa Archbishop Marcel Gervais also said in a statement that Huels had "announced his intention to leave the Servite order and seek laicization" and stressed that the archdiocese had not previously been informed of any "inappropriate behavior" in Huels' background.

In early September, an archdiocesan spokesperson confirmed to NCR that the archdiocese told Huels in 2002 that he was not to present himself as a priest or religious, or function as a priest.

"As far as we know, he has not been representing himself as a priest, nor has he done any pastoral ministry in our archdiocese," Deacon Gilles Ouellette, communications officer and executive assistant to current Ottawa Archbishop Terrence Prendergast, wrote in an email to NCR. 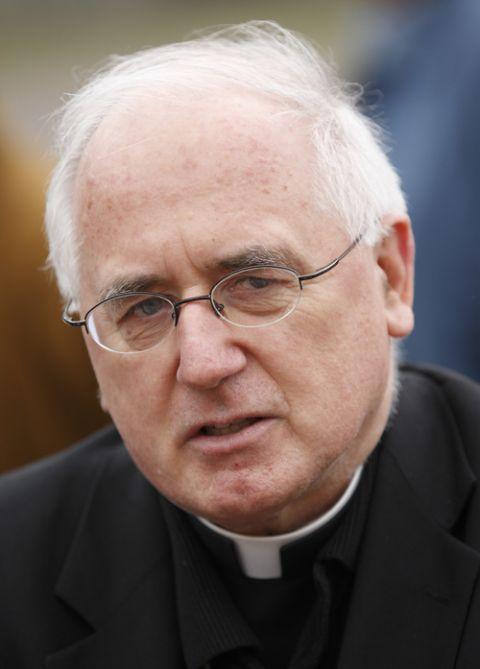 Bland believes Huels is still a member of the Servites, but repeated attempts to contact Huels and the Servite provincial office in Chicago to confirm Huels' status were not successful. Huels was not listed as a priest in the 2016 Official Catholic Directory.

Victims advocate Peter Isely, a founder of Ending Clergy Abuse and himself a victim of abuse by a religious order priest, said it was unclear whether religious order priests are covered under the Dallas Charter norms, which state that bishops and major superiors are "to meet periodically to coordinate their roles concerning the issue of allegations made against a cleric member of a religious institute ministering in a diocese/eparchy" (Article 15).

But a representative from the Conference of Major Superiors of Men, or CMSM, said religious order priests and brothers are covered under the Dallas norms when they receive faculties to work in a diocese. The conference, in conjunction with a risk-management group, Praesidium Religious Services, also created its own "Standards for Accreditation."

Those standards include "zero tolerance" and mandated communication about a credible allegation to a bishop when a priest or brother moves to another diocese, said Jesuit Fr. Jerry McGlone, the CMSM's associate director for the protection of minors.

But compliance varies, said McGlone, with about 17 percent of current religious institutes in the United States not complying with the CMSM accreditation or some of form of compliance from another group.

A version of this story appeared in the Oct 5-18, 2018 print issue under the headline: Admitted abuser removed from university post in Canada.