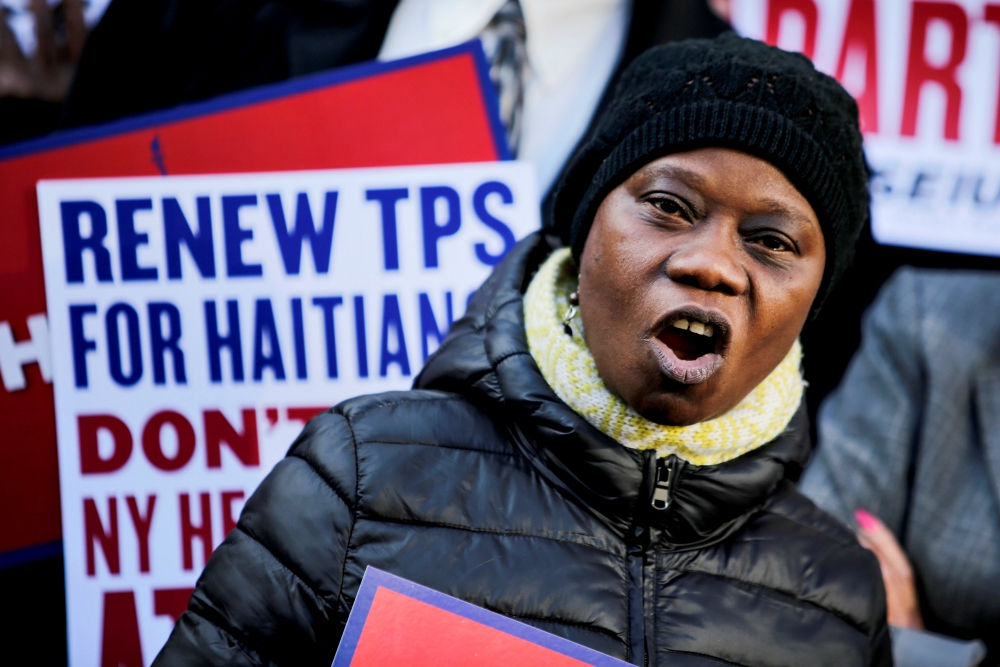 A woman participates in an immigration rally for Haitians Nov. 21 in New York City. (CNS/Reuters/Eduardo Munoz)

Religious leaders and immigrant rights groups condemned the termination of a program that protected Haitian immigrants from returning to dangerous conditions and renewed their call for Congress to create a "permanent solution" for beneficiaries of the program.

A Nov. 20 press release from the Catholic Legal Immigration Network (CLINIC) noted that the announcement came a few days before Thanksgiving, "a celebration with its origins in our ancestors' gratitude for having found refuge in a new land."

Since a magnitude 7.0 earthquake devastated much of Haiti in 2010, more than 50,000 Haitians have found refuge in the United States under a program known as Temporary Protected Status.

Acting Secretary of Homeland Security Elaine Duke announced late on Nov. 20 that the program will be terminated for Haitians July 22, 2019. Those in the U.S. under the program who are not eligible for permanent legal status will have to return to a country that many predict will be unprepared to safely receive them.

Temporary Protected Status, established under the Immigration Act of 1990, grants immigrants from countries that are experiencing violence, natural disasters or other dangerous and temporary conditions permission to work and remain in the U.S. as long as the Department of Homeland Security designates their country as too dangerous to receive them.

"There is no factual basis to assume that within 18 months conditions will have improved enough for the safe return of TPS holders," Jeanne Atkinson, executive director of CLINIC, said in the press release about the Haiti decision.

Atkinson pointed out that even a U.S. city with more resources would take at least 10 years to recover from a natural disaster like the 2010 earthquake that prompted Haiti's protected designation. The CLINIC press release said the earthquake killed 230,000 people and affected about 3 million people, one-third of Haiti's population.

A Nov. 20 press release from DHS says that since the earthquake, "the number of displaced people in Haiti has decreased by 97 percent, significant steps have been taken to improve the stability and quality of life for Haitian citizens, and Haiti is able to safely receive traditional levels of returned citizens."

But according to Atkinson, "At least 38,000 earthquake victims are still homeless" and 50 percent do not have adequate food.

"On top of that, terminating TPS means an end to the remittances sent home by Haitians who are working productively in our economy," she added. "It is a doubly cruel blow to Haiti, cutting off some of the essential income that has been contributing to its recovery."

Two months before Temporary Protected Status is set to expire for a particular country, Homeland Security is required to review country conditions and decide to terminate the designation or extend it for six, 12 or 18 months. The Haiti announcement, made in anticipation of a Jan. 22 expiration date, makes some suspect that decisions are becoming politicized rather than based on country conditions.

"It was the secretary's job under the law to determine if extraordinary and temporary conditions in Haiti prevent the safe return of Haitian TPS holders," Jill Marie Bussey, advocacy director for CLINIC, said in the press release. 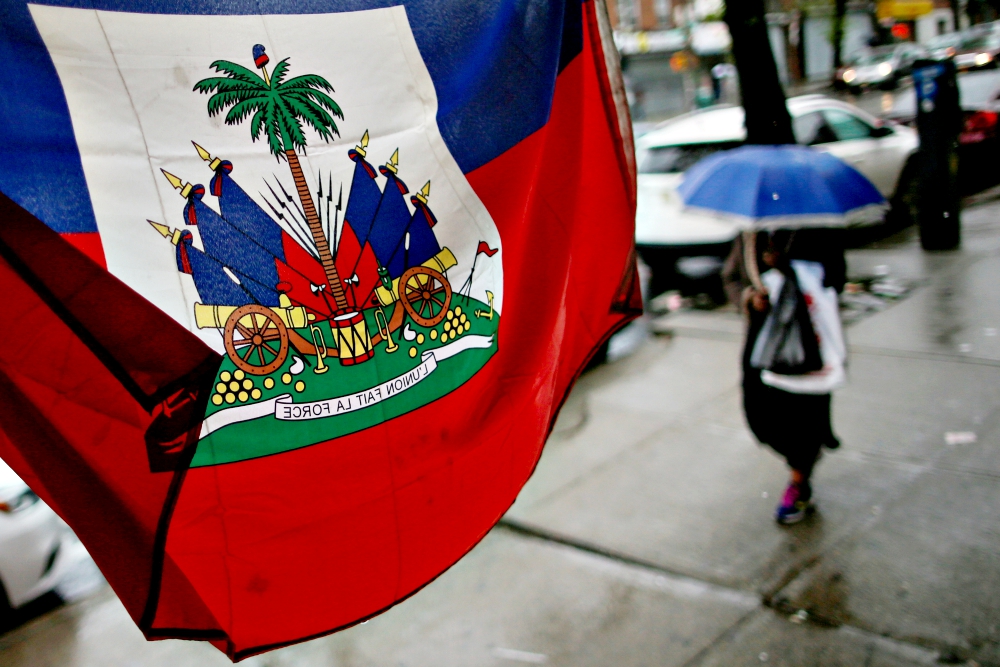 A flag from Haiti hangs outside a store as a woman walks with an umbrella May 13 in Brooklyn, New York. (CNS/Reuters/Eduardo Munoz)

Since the last time DHS extended Haiti's Temporary Protected Status, said Bussey, two hurricanes have exacerbated Haiti's food and housing crisis. "Clearly, this decision by the administration was not based on the facts on the ground."

Alianza Americas, a coalition representing 50 immigrant-led organizations and 100,000 families, said the decision to cancel Temporary Protected Status "just days before Thanksgiving is a shameful new low for an administration that has given clear priority to fear-mongering over facts — the nation's economic interests, humanitarian responsibilities, and stake in regional stability — in setting its immigration policies."

According to Alianza Americas' press release, the decision ignored calls from faith leaders, municipal governments, immigrant groups, the U.S. Chamber of Commerce and the American Hotel and Lodging Association, all of which urged the Trump administration to extend the status.

Catholic groups advocating for the Haitians included the U.S. bishops' Committee on Migration, chaired by Bishop Joe Vásquez of Austin, Texas; CLINIC; Catholic Relief Services; and Catholic Charities USA. In a Nov. 17 letter to Duke, leaders of these groups based their recommendation on a delegation trip to Haiti sponsored by the U.S. Conference of Catholic Bishops.

The delegation found that "Haiti's progress toward recovery has been limited and tenuous" and that serious issues such as poverty, lack of infrastructure, a cholera outbreak and food insecurity make the country unprepared to reintegrate Temporary Protected Status holders.

The letter also expressed concern for the more than 27,000 U.S. citizens who are children of Haitian Temporary Protected Status holders, who will be uprooted from "the only country they have ever known or face family separation."

A report from CLINIC noted some of the same concerns and emphasized the contributions of protected status holders to the United States. Eighty-one percent are employed, 4,200 of them are married to lawful permanent residents, and nearly half have mortgages.

In a Nov. 21 statement on behalf of the bishops' migration committee, Vásquez said the decision will "devastate many families" and "tear individuals from their loved ones, homes, careers, and communities."

Advocates, lawmakers and even the Department of Homeland Security have called for a legislative solution that would grant stability to Temporary Protected Status holders.

In a Nov. 21 press release, Alianza Americas asked Congress to find the "political will to do what is right and formalize what these individuals are: Permanent residents of the US."

If Congress does not agree on a legislative solution before the July 2019 deadline, Haitians will have to make difficult decisions about whether to return to Haiti or remain in the U.S. without documents. If they do return, they will have to decide whether to bring U.S. citizen children with them.

No parent should ever have to choose between leaving a child behind and bringing them a "desperate, unstable" country that is not ready to receive them, said Rabbi Elizabeth Richman, deputy director and rabbi in residence of Jews United For Justice. She added that her immigrant ancestors who found refuge from persecution in the U.S. would be "horrified" by the administration's decision.

Bussey, describing Haiti as "one of the most dangerous countries in the world," told NCR, "I can certainly tell you that I would never take my 9-year-old to those conditions."

"Even if something happened to me and I had to return home, I would leave my son," she said. "What we're talking about is breaking up families."

In an effort to prevent that from happening, several members of Congress have already proposed bills that would protect Temporary Protected status holders.

A bipartisan group of lawmakers in the House of Representatives from South Florida has proposed legislation that would allow Temporary Protected Status holders from Haiti, El Salvador, Honduras and Nicaragua a path to legal status.

Meanwhile, Maryland's senators, Ben Cardin and Chris Van Hollen, both Democrats, and Sen. Diane Feinstein, a California Democrat, are proposing a bill that would make any Temporary Protected Status holders eligible to apply for lawful permanent residence after three years.

"Congress has 18 months to do the right thing" for Haitians and other Temporary Protected Status holders, said Miami Archbishop Thomas Wenski during the press call with faith leaders.

Wenski, who spent 18 years working with the Haitian community in Miami and led the recent bishops' conference delegation to Haiti, added that Haitians have integrated into American society. "It's no longer a question of sending them home," he said. "They are home."

[Maria Benevento is an NCR Bertelsen intern. Her email address is mbenevento@nconline.org.]