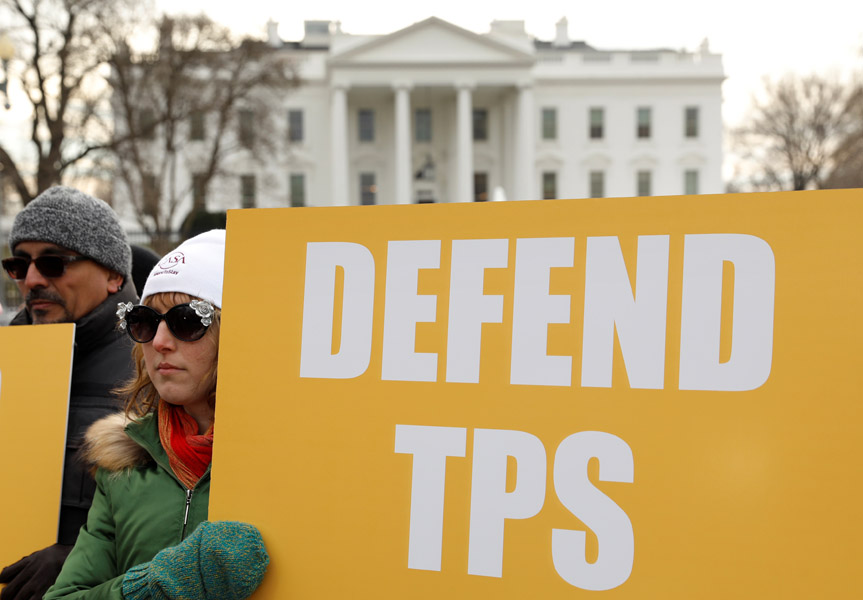 Yanira Arias came to the U.S. on a tourist visa in 2000 after increasing levels of harassment and crime on the streets and buses of San Salvador, El Salvador, where she worked as a journalist, became intolerable.

When a 2001 earthquake struck El Salvador, it left the country devastated but offered her the opportunity to apply for temporary protected status, which allowed her to work and remain in the U.S.

After Secretary of Homeland Security Kirstjen Nielsen announced Jan. 8 that the status will be terminated for El Salvador Sept. 9, 2019, Arias is among many advocates working to protect the hundreds of thousands of immigrants like her who could be uprooted from U.S. communities and forced to return to dangerous countries.

Arias is one of nearly 200,000 Salvadoran immigrants who benefitted from temporary protected status, which grants immigrants from countries that are experiencing violence, natural disasters or other dangerous and temporary conditions permission to work and remain in the U.S., as long as the Department of Homeland Security continues to designate their country as too dangerous to receive them.

Immigrants from 10 countries benefit from the program, although over the next two years the status is set to end for Nicaragua, Haiti, Sudan and El Salvador, who together make up nearly 250,000 of the approximately 320,000 who currently hold the status.

In a press release announcing the termination for El Salvador, the Department of Homeland Security said the country had recovered from the 2001 earthquakes but that the delay in the program's termination would "allow Congress time to craft a potential legislative solution" for those "who have lived and worked in the United States for many years."

While immigration advocates have also called for a legislative solution, many, including multiple Catholic bishops, the leaders of major Catholic organizations and a group of nearly 400 faith leaders and religious organizations, have asked the Department of Homeland Security to renew El Salvador’s status for the maximum 18 months.

Faith leaders noted that those affected by the administration’s decision include the over 192,000 U.S.-born children of Salvadoran Temporary Protected Status recipients, who could either remain behind without their parents or return with them to a dangerous country.

The decision to terminate the status was decried by many organizations including the U.S. Conference of Catholic Bishops, the Ignatian Solidarity Network, the Catholic Legal Immigration Network, Inc., (known as CLINIC), the Sisters of Mercy, Alianza Americas, the Immigrant Legal Resource Center, Catholic Relief Services, the Center for Migration Studies, Interfaith Worker Justice and the National Advocacy Center of the Sisters of the Good Shepherd.

Several critics, including Kevin Appleby of the Center for Migration Studies, said the decision reflected an overly narrow interpretation of the law inspired by anti-immigrant sentiment.

While few would argue that El Salvador has not recovered from the earthquakes that originally prompted its designation, Appleby said the current administration was legally allowed to consider other factors which would have justified an extension.

These factors, which include high levels of violence and severe economic issues, make it urgent to find a legislative fix that allows Salvadorans to stay in the country, said advocates.

"TPS holders who are deported to El Salvador will become prime targets for gang extortion and violence because of their American bank accounts and U.S. connections," said Jill Marie Bussey, director of advocacy for CLINIC, in a Jan. 8 press release.

"We shouldn’t even be having a debate on the question of whether it’s safe for people to go back," Jean Stokan, justice coordinator of the Institute Justice Team for the Sisters of Mercy of the Americas, told NCR. "This is one of the most violent countries on the face of the planet that is not at war."

Stokan said the U.S. has a special obligation to Salvadoran immigrants because U.S. policy, including funding a decade-long civil war and promoting free trade policies that harm farmers, contributed to the root causes of migration. She also pointed out that jobs are scarce in El Salvador and remittances sent from Salvadoran immigrants in the U.S. provide an important boost to the economy.

Arias is one example of an immigrant whose family in El Salvador relies on her. She supports both her elderly parents and her siblings, including a brother with three teenage children who had to quit his job as a restaurant manager after gang members began extorting and threatening him. Five years later, he has not found work.

"The cancellation and termination of TPS is not just affecting Yanira and asking her to pack and go to El Salvador but it’s an entire family impacted by this issue," said Arias, speaking about herself. She also pointed out that her story is only one of many.

Advocates also argued that even aside from dangerous country conditions there is a compelling case to allow Salvadoran temporary protected status recipients to stay in the United States. They have deep roots here and a long track record of good behavior, demonstrated in background checks every 18 months when they renew their status.

"They're our neighbors," said Appleby. "They are people who are practically part of our country except on paper. … They'll be forced to quit their jobs, sell their homes, take their kids out of school and go back to a country they do not know and which is extremely dangerous."

According to a report from the Center for Migration Studies, 88 percent of Salvadoran temporary protected status holders are part of the labor force in the U.S.

Meanwhile, a report from the Center for American Progress says the average Salvadoran with temporary protected status has been in the U.S. for 21 years (according to U.S. Citizenship and Immigration Services, all have lived in the U.S. since before Feb. 13, 2001). The report also says Salvadoran status holders contribute $109.4 billion to the gross domestic product over 10 years and that 45,500 of their households have mortgages.

"It's really heartless," said Sr. Áine O’Connor, a member of the Institute Leadership Team for the Sisters of Mercy. "The decision is to me devoid of the people. It's devoid of a concern for what impact will this have, this day, on the family, on the community, on the church … on what America's being built on."

In the coming months, advocates plan to support temporary protected status holders as much as possible.

Arias said her organization will take a three-tiered approach, encouraging individuals to seek legal aid to explore avenues to legal status while communicating with embassies to ensure smooth transitions if immigrants do return, and advocating for Congress to create a legislative solution.

Appleby said it would be "timely" for concerned Catholics and others to contact their legislators now, pointing out that there is an opportunity for a temporary protected status fix to be included in current immigration negotiations.

O’Connor agreed that Catholics should advocate for a legislative solution, and added that they should be speaking up in churches and offering refuge to immigrants.

"If we were silent about the impact of this decision ... then I think the silence would totally destroy the soul of this country," she said. "I feel strongly that the naming is critical to getting back the soul. … We have to name it, speak it, decry it and call for another response to meet the needs of the El Salvadoran people."

A version of this story appeared in the Jan 26-Feb 8, 2018 print issue under the headline: Advocates urge action to keep nearly 200,000 Salvadorans in US.