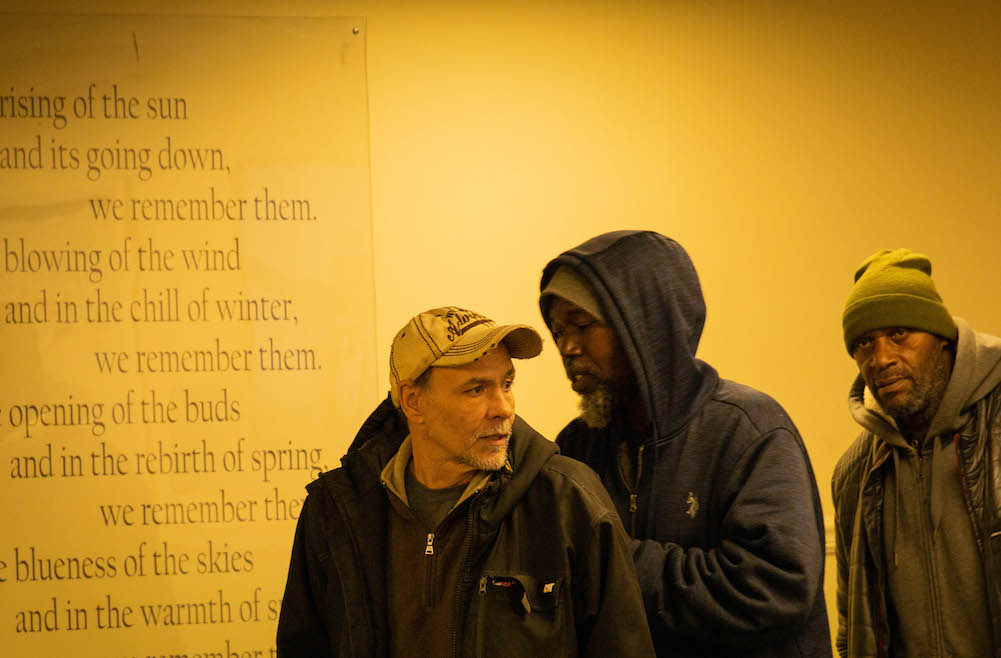 Last summer, Donald Trump — speaking about the homeless — focused on how they made cities look bad, saying, "We may do something to get that whole thing cleaned up."

In September, his administration's Council of Economic Advisors released a report on homelessness that, among other things, suggested policing might be the answer, drawing reactions against the idea of "rounding people up" into federal facilities.

Advocates for the homeless in the two largest cities in Senate Majority Leader Mitch McConnell's home state reject that proposed solution, as they continue to offer a roof and other services this winter.

Here in Central Kentucky, snow and bitter cold are a rarity, but it does happen.

When the forecast changes drastically, as it did last winter with single-digit temperatures, the result was three days of school closings.

The previous winter, while her partner sought shelter, a middle-aged homeless woman huddled out in the cold, and perished.

Here in Lexington — the state's second largest city — (population 323,780) several interfaith organizations do what they can to prevent such tragedies.

Ginny Ramsey, executive director of the Catholic Action Center (CAC), a multi-purpose agency for homeless people that, Ramsey explained, "first began in 2000 when we spent eight months literally brainstorming ourselves into existence."

The CAC heavily bases its purpose and work on the philosophy of the Catholic Worker movement and Dorothy Day, co-founder of the cause with Peter Maurin.

"Dorothy always said, and strongly believed, that if you start the day working with one single person, by the end of the day you will have a bounty," Ramsey told NCR.

One of Day's most famous quotes, Ramsey said, was, "We have all known the long loneliness, and the solution is love, and that love comes with community."

She said that CAC relies on donations, with their work increasing along with the drug epidemic.

Just how much the figure has increased is difficult to tell, Ramsey said, "because you have people who are 'couch-hopping' [staying for periods with various relatives or friends], have an intervention in progress, or because of their drug/alcohol problem, are moving from place to place."

She noted that the U.S. Department of Housing and Urban Development tracks the number of homeless people nationally — using a "point in time" procedure — which takes in the entire number of homeless persons, but that "HUD has so narrowed the definition of being homeless that some people are not included in that count."

How did things get this bad, in Central Kentucky and elsewhere?

"For one thing, a lot of people who were hit hard by the Great Recession of 2007-2008, did not get rehired, and also lost their homes," Ramsey explained.

"There were also people who had worked all their lives but who were marginally employed that entire time, with no education, and others who had only been working for four to five years," Ramsey said.

The CAC has been at its permanent location since April 2017, when a contentious showdown with the city of Lexington was amicably resolved. 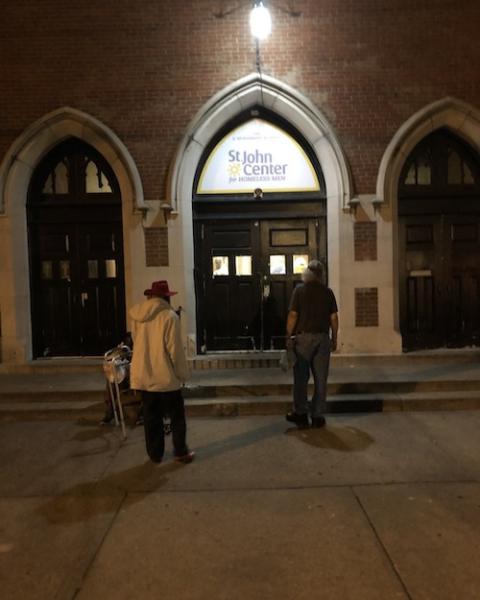 People wait in the early morning in front of St. John Center in Louisville, Kentucky. The shelter is one of three programs operated by the agency, which includes street outreach, social services program, and a supportive housing program that works with 92 formerly homeless individuals now living in apartments of their own. (Jane Walsh)

The CAC had earlier operated a shelter that provided meals and a place where clients could sleep on tables and chairs (for lack of beds) but then opened its first overnight shelter elsewhere.

"Complaints of the 'not-in-my-backyard' variety flowed in from the neighborhood, but the real issue — supposedly — was a zoning one; we were operating a shelter where the space was designated for a church," Ramsey said.

The CAC filed suit with the federal Housing and Urban Development department, which handed the matter over to the Justice Department after first investigating it for three years.

"The Justice Department ruled that the city had violated the First Amendment, the Civil Rights Act, the Persons with Disabilities Act, and Fair Housing Act," Ramsey recounted.

Without any monies changing hands, both parties settled. CAC was able to move into a building formerly occupied by the Lexington Police Department and several municipal government offices.

The CAC now provides 134 beds for its homeless clients, with that figure broken down into two sleeping areas for women and three more for men.

The center offers mental health services during the day.

"We also provide video presentations to assist people staying here in applying for various government benefits, and they are able to use our address to receive their mail here. Not having a mailing address can create more problems for someone who is homeless," Ramsey said.

One person who did come to the CAC — in better weather — did not have any say in the matter.

"We had an 84-year-old man whose nephew simply dropped him off here, with his clothes, because the family could no longer deal with taking care of him," Ramsey recalled.

Another organization, The Downtown People, is only four years old, but the 50-plus strong volunteer group feeds a lot of the homeless every Sunday morning, rain or shine.

"Our fourth anniversary was this Thanksgiving just past, and we have between 20 to 25 regular cookers and servers, along with another 50 people who do various or miscellaneous tasks," spokesperson and president Anne Doolin told NCR.

Doolin feels that the attitude in downtown Lexington towards homeless people "is tolerant; the police officers leave us alone unless there is an impaired person in the food line, then it becomes a different story," she observed.

Doolin estimated that her group serves between "200 to 250 people within an hour, and we are proud of our 'money-back guarantee' as we call it, and that our program is less institutional in its nature."

The Episcopal Church of the Good Shepherd, located just outside downtown Lexington, practices what Day preaches, with its Room At The Inn program.

Anne Peschke, coordinator, described the group as "an interfaith homeless shelter that runs from Nov. 1 to April 1, in which we take turns along with 22 other churches hosting homeless men, one church a night, seven nights a week."

Potential guests must register with Room at The Inn by 6 p.m. on each church's host night, and must have a breathalyzer test (administered at nearby First United Methodist Church) if they want to be admitted.

Other preparations for the night include Inn staffers bringing out air mattresses and assembling amenities such as soap, body lotion, deodorant and tooth brushes. 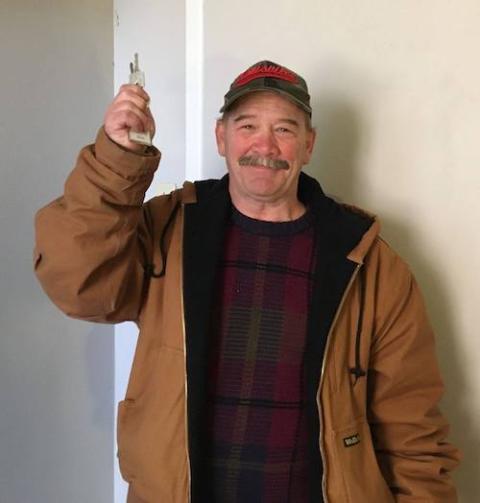 Kenny, a former resident of the St. John's Center in Louisville, Kentucky, shows the keys to his new apartment. (Maria Price)

In downtown Louisville, the homeless are assisted by the St. John's Center for Men.

Maria Price, executive director, told NCR that she traces the homeless problem to — in part — to "our city and the metro government having to make up for 40 years of the federal government moving away from building and maintaining affordable housing for people, something that began in the Reagan era."

The center also took homeless women to clinics to have ultrasound tests because there are, Price said, "a lot of pregnant women out there on the street."

The city of Louisville has opted for what is called 'The Clean Up, followed by 'The Clear Out', of homeless camps across the area," Price said.

Under this policy, according to Price, "homeless people across the city are notified that they are on public property and given 21 days to find another place to live."

"Those staying on private property are hardly given any notice at all, and we work with Metro Public Works to give them such notice," Price explained.

St. John's tries to minimize the damage by having one of their outreach teams descend on a targeted homeless camp, and ask the people staying there if they would like to try a residential program.

"We engage them in conversation about what other options are available, and to find out what they might be interested in," Price said.

She noted, however, that the eventual result "is devastating, because the city simply comes in with trash bags and gloves, making people throw away things [that they need] simply to achieve sanitation."

"Being evicted from a dwelling makes finding the next one even more difficult, and in Louisville evictions are twice the national average," McGeeney said.

Ed Wnorowski, executive director of St. Vincent De Paul, Louisville, supervises an organization with a sprawling St. Vincent De Paul Campus. The campus offers a variety of social service options, most in partnership with other agencies and churches, but all aimed at combating homelessness, drug addiction and continual poverty.

Being homeless and living on the street, the director said, "can be likened to losing your car, because you can't get to work, and you can't buy food, or you can't pay the rent, etc."

As to the city's recent purge of the homeless "camps" dotting the city, Wnorowski said, "There is no easy answer because we need more affordable housing, more space — the list goes on — and even a 100-bed shelter that opened up recently turned out not to be enough."

"We need more; more beds, more sanctuary places during the daytime, etc., and I wish I had the answer, but I don't," Wnorowski said.