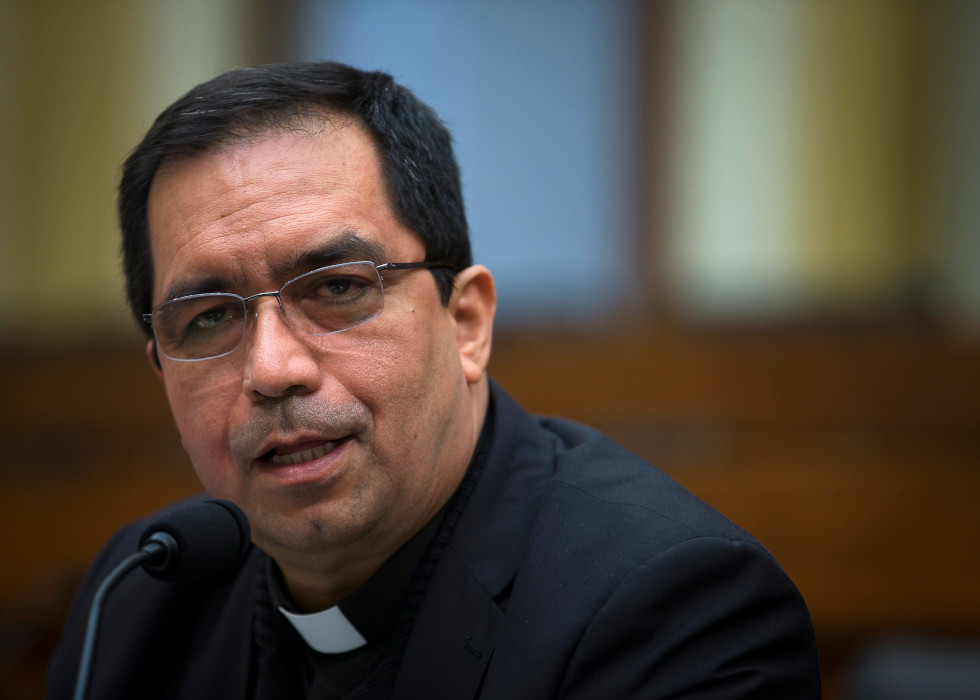 Salvadoran Archbishop José Escobar Alas of San Salvador is pictured in Washington April 13, 2018. The archbishop initially refused to follow a judge's order for investigators to view archdiocesan records on a 1981 massacre. On Jan. 20, 2021, after much outcry, he reversed his decision. (CNS/Tyler Orsburn)

The archbishop of San Salvador reversed course and said Jan. 20 he would allow investigators to view church archives related to a wartime massacre.

The announcement came following swift outcry after comments Archbishop José Escobar Alas made during a Jan. 17 news conference. The archbishop announced he would not grant authorities access to the archdiocese's archives on human rights abuses, even though a judge had issued a warrant.

Citing a "misunderstanding" about what the judge was asking, Escobar said in a Jan. 20 video released by the archdiocese that authorities were welcome to view documents the church has on the 1981 mass killing in the town of El Mozote, where 800-1,200 Salvadoran civilians, including many children, were slaughtered by government forces.

In 1977, when St. Oscar Romero was Archbishop of San Salvador, the archdiocesan human rights office, Tutela Legal, was a place where the poor and disenfranchised could have their stories of disappeared or murdered loved ones documented. The hope was to house the information in the archive to locate the person, dead or alive, or at least document the abuses that led to his or her killing and eventually have the perpetrators face justice.

Escobar abruptly closed the office in 2013 but, after criticism, reopened it, though with greater limitations to those wanting to access it.

An inspection of the documents relevant to the massacre is scheduled Jan. 25.

The archbishop had initially said the process would hurt victims and also voiced concerns that others would "kidnap" the documents.

"We spoke with the judge to precisely find out what he wanted with his visit to the archive," said Escobar. "He clarified his intention to help the victims of the massacre of El Mozote and that at no time did he intend to take with him any document.

"The purpose of the archives, as we have said, is to uphold justice and we will support victims and we're ready to help any cases that can be adjudicated," the archbishop said.

The judge will be issued certified copies of any material he considers helpful so authorities can pursue justice, the archbishop said.

David Morales, a lawyer with the human rights group Cristosal, who has prosecuted the El Mozote case, had pleaded with archbishop to reconsider his initial refusal, saying the prelate's statements were "lamentable" and based on "disinformation."

The initial refusal by the prelate was seen as a second blow to those attempting to prosecute the crime since armed forces, backed by Salvadoran President Nayib Bukele, have refused to allow authorities to view any records the institution might have on the mass killings in which its members participated.