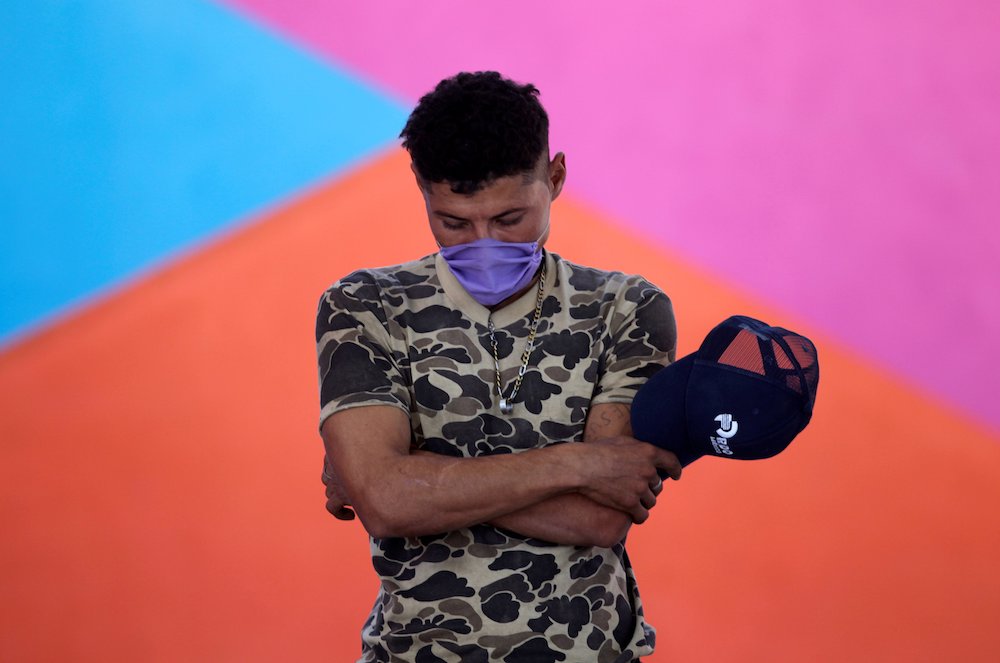 A migrant prays during a Mass at Posada Belen migrant shelter in Saltillo, Mexico, Nov. 10, 2020. A federal circuit court of appeals said Jan. 8, 2021, that a Trump administration executive order that would allow state and local government officials to reject refugees in their jurisdiction violated long-standing resettlement practices. (CNS/Reuters/Daniel Becerril)

Less than a week after Joe Biden's election victory, Rachel Pollock began receiving emails and phone calls from Catholic refugee resettlement officers across the country asking how soon it would be before they could get back to work.

During the last four years, Pollock, director of resettlement services for the U.S. Conference of Catholic Bishops, has seen program after program shutter due to the continual slash in refugee admissions by the Trump administration.

"In 2016, we had 71 offices throughout the U.S., and we're currently operating 40," she told NCR. Now, Pollock and her collaborators are hoping that Biden's pledge to increase the annual admission target to 125,000 refugees, up from Trump's cap of 15,000 individuals, will open doors for new arrivals that will help restore their programming efforts.

"What the past few years have meant for us and other resettlement agencies across the U.S. has meant we've lost a lot of capacity to do this work," said Pollock, who contracts with local Catholic Charities agencies throughout the country who resettle refugees in local communities.

Along with the loss of 30 program partners that have had to stop the work entirely, she says that the offices that are still doing the work of resettlement are serving a greatly reduced number than they were four years ago.

"They're committed to this work, but it's been a really challenging time," she said. Yet for the first time in several years, Pollock is feeling optimistic about the incoming Biden administration's stated intentions to increase the refugee admission ceiling and what this could mean for Catholic groups throughout the country.

"We know that the goal the Biden administration has set at 125,000 is a lofty goal and it's going to take time and investment," said Pollock. "The infrastructure for resettlement has been really decimated over the last few years, but we're really eager to do this because it's been so critical to our mission, and we're hopeful that the Biden administration will be good federal partners in our goal to do this."

For 40 years, Catholic Charities of Dallas worked in concert with the U.S. bishops and the State Department to help resettle refugees. In 2016, the organization celebrated a record high with nearly 1,000 new arrivals. Yet in December 2018, they welcomed their last adult family arrival, and for the last two years the program has been disbanded.

Dave Woodyard, CEO of Catholic Charities of Dallas, told NCR that refugee resettlement had been a "significant part" of their programming over the last 40 years.

"We're proud of that history and known for it in our community," he said, expressing regret that in 2018 they employed nearly 45 individuals working to staff refugee resettlement. Yet when new arrivals stopped, he had to lay off or redeploy 80% of that staff.

"We've continued to serve the going needs of those we've resettled, as well as serving refugees that have come through other agencies or relocated to the Dallas area," said Woodyard, noting that there is ongoing vocational training and language education for individuals and families that they have supported.

"Now, we see the winds shifting," said Woodyward, describing an eagerness to welcome new arrivals again. "We're able and capable. It's a mission that's near and dear to our hearts, and we're confident that we have the ability to scale back up and to do so quickly." 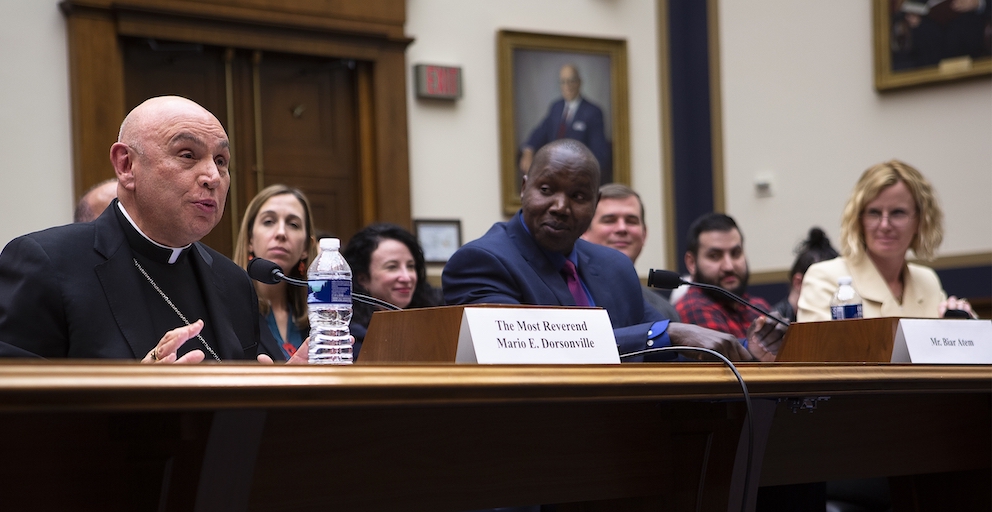 Auxiliary Bishop Mario Dorsonville of Washington, chairman of the U.S. bishops' migration committee, addresses the House Judiciary Subcommittee on Immigration and Citizenship in Washington Feb. 27, 2020. Also pictured are Biar Atem, a Nevada delegate to the Refugee Congress and a member of its board of directors, and Lora Ries, senior research fellow in homeland security at the Heritage Foundation. (CNS/Tyler Orsburn)

For that to happen, Ashley Feasley, director of policy for the U.S. bishops' Migration and Refugee Services office, told NCR there are three things she would like to see happen: On day one in office, or soon thereafter, Biden needs to resubmit the presidential determination to Congress, which is the statutory requirement needed to increase the ceiling for refugees for the fiscal year.

Secondly, she would like for the new administration to reestablish ties with the United Nations High Commissioner for Refugees to serve as a referral partner, which the Trump administration ended.

Thirdly, she would like for the Biden administration to base refugee resettlement on areas of regional need, which requires collaboration between the State Department and governments in each particular region. This had been the previous practice until the Trump administration began to base its acceptance of new arrivals on areas of geopolitical importance to the U.S.

"Of all the migration programs, refugee resettlement is the program the president has the most executive power on," said Feasley. While she said that programs like that of the U.S. bishops and other partners engaged in voluntary resettlement are in a "holding pattern," once things are in motion, they will be "ready to go."

Pollock concurred, saying the process of reestablishing resettlement programs "has to be done in collaboration with our federal partners, and we can't get out ahead of them."

"But, folks are very eager to do the work, and we're eager to partner with them when the time comes," she added.

For leaders such as Woodyard and at other Catholic Charities offices around the country, Pollack says there's been a "pent up desire to engage in this work." 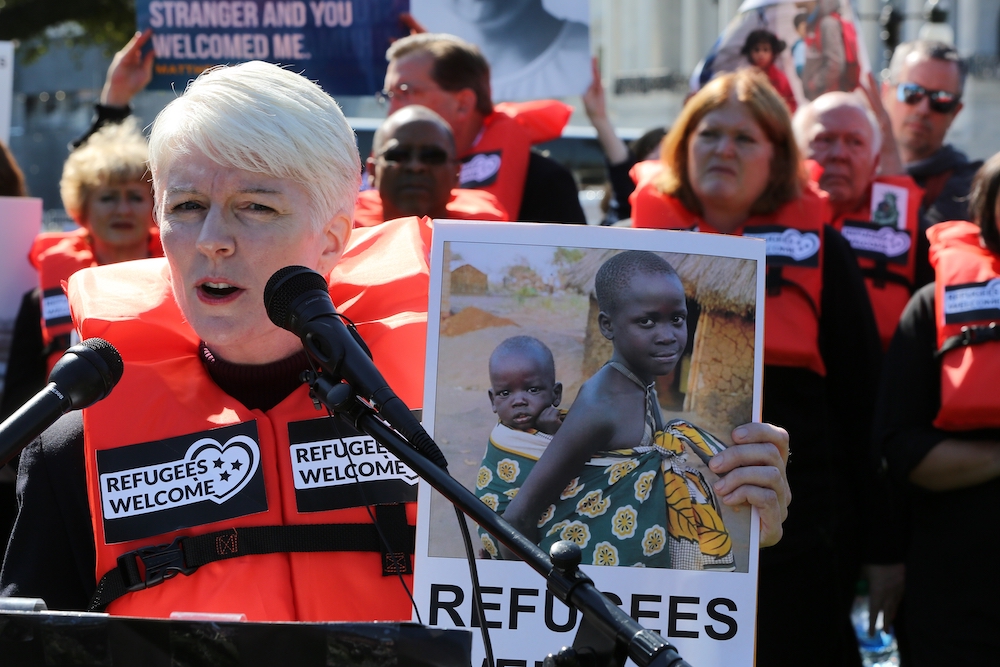 Susan Gunn, director of the Maryknoll Office for Global Concerns, speaks during a protest Oct. 15, 2019, outside the U.S. Capitol in Washington against the Trump administration's cuts in the number of refugees to be admitted under the U.S. resettlement program. (CNS/Bob Roller)

While some critics of resettlement have charged that the Catholic Church is only interested in refugee resettlement for financial gain, Feasley was quick to reject the red herring, noting that resettlement is not a profit-generating enterprise.

"This is a model public-private partnership that has been studied by other countries as an example," she said, adding that most incoming refugees are from other faith traditions. "We don't resettle because they are Catholic; we do this work because we're Catholic and this is what we do in our faith."

Woodyard also lamented the fact that refugees have often been lumped into the debate over domestic immigration in recent years, particularly when it comes to the crisis at the southern U.S. border, without most folks understanding the distinctions.

"These programs have been maligned and misunderstood," he said. "None of the refugees coming through are illegal," noting that new arrivals go through extensive vetting by the State Department. 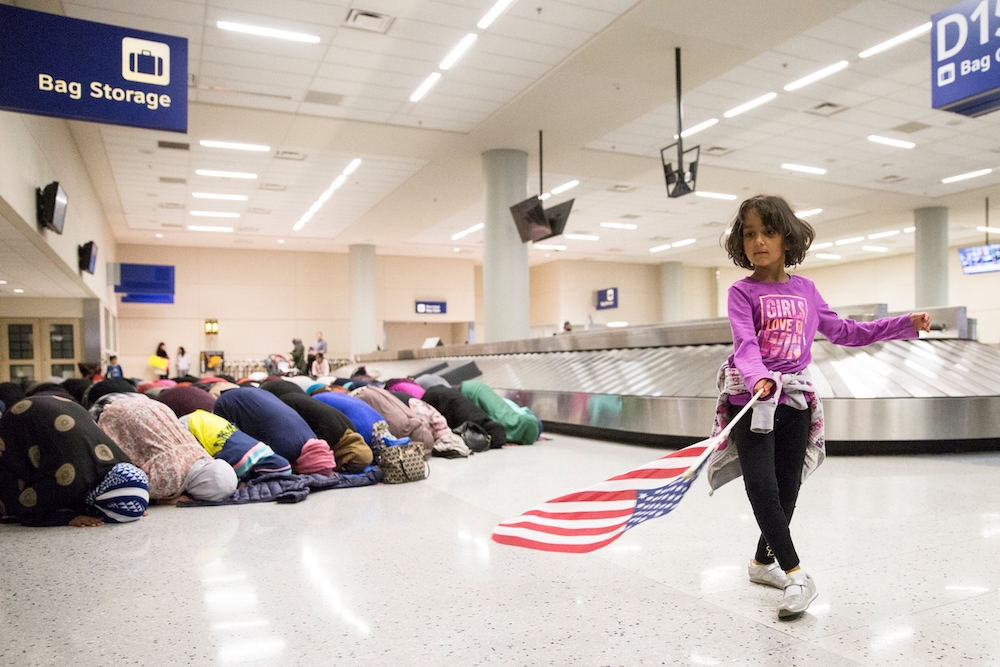 A young girl dances with an American flag at Dallas/Fort Worth International Airport in Dallas Jan. 29, 2017, as women pray during a protest against a travel ban imposed by U.S. President Donald Trump's executive action. (CNS/Reuters/Laura Beckman)

According to the United Nations data, there are nearly 80 million displaced people in the world, nearly 26 million of whom are refugees. Feasley said that when you look at it from that perspective, the overall program is quite small. Even so, she said, that global resettlement has fallen by 50% in the last four years."

"When the U.S. doesn't resettle, other countries don't," she observed.

Feasley and Pollock said that they're proud the Catholic Church is a leading example of doing resettlement work on the ground and believe that it shows the church and the country at its best.

For Pollock, she said that refugee resettlement is an example of what Pope Francis means when he talks about building a "culture of encounter."

"When you're doing this work, you get to have that close proximity to that encounter," said Pollack. "Folks are just ready to do it again."