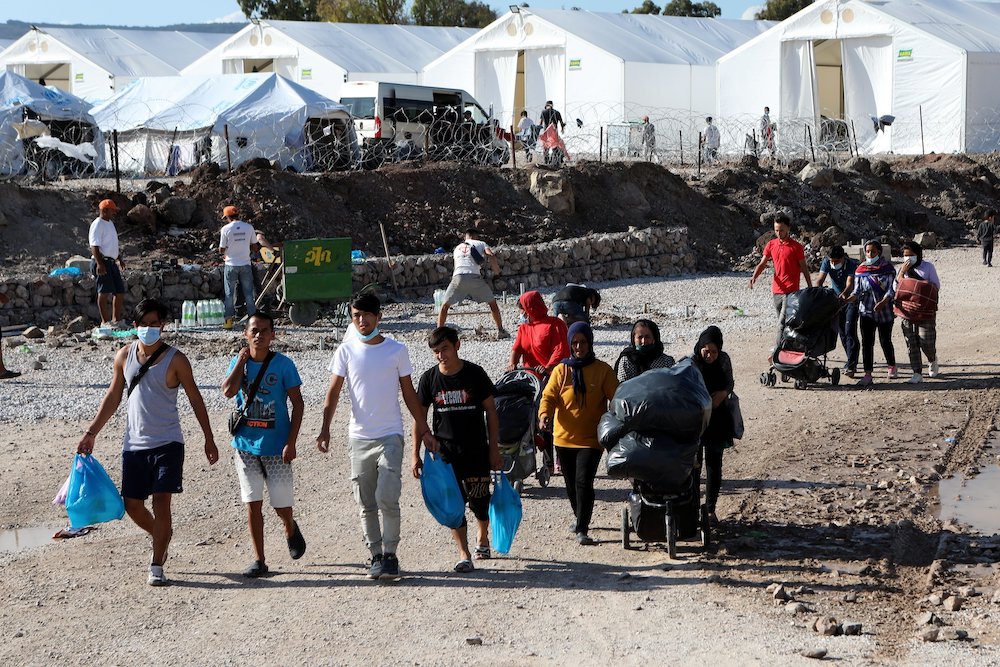 Migrants walk with their belongings as they make their way to the Kara Tepe refugee camp on the Greek island of Lesbos Oct. 14. (CNS/Reuters/Elias Marcou)

Joe Biden chose the setting of one of the Catholic Church's leading refugee support organizations' events to state for the first time as president-elect that he will dramatically increase the target for refugee admissions to the United States, offering a stark contrast to the historic lows under President Donald Trump that were long protested by Catholic leaders.

The Catholic president-elect who repeatedly invoked his faith on the campaign trail, said he would raise the annual admission target to 125,000, marking a sharp increase to the Trump administration's cap of 15,000 individuals.

"A Biden-Harris administration will restore America's historic role in protecting the vulnerable and defending the rights of refugees everywhere," he said.

Last June, on World Refugee Day, Biden had previously pledged to increase the refugee ceiling, but this is the first time he has committed to doing so as president-elect.

His remarks came on Nov. 12 during a virtual 40th anniversary celebration for Jesuit Refugee Service/USA. Established in 1980 as an initiative of the Society of Jesus, the organization works around the globe to resettle refugees and other forcibly displaced persons.

"This is a great organization. This organization was founded to serve the needs of some of the most vulnerable among us," Biden said in a prerecorded message. "JRS believes that in the stranger, we actually meet our neighbor and that every society is ultimately judged by how we treat those most in need." 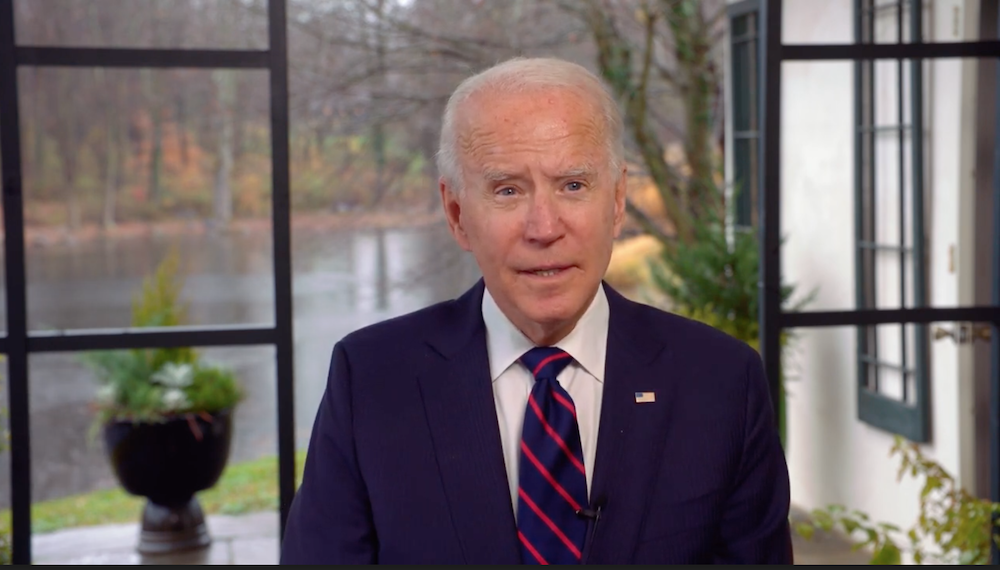 Trump, with his "America first" agenda — which was often fueled by incendiary rhetoric directed toward non-white and non-U.S.-born individuals — reduced refugee acceptance numbers, beginning with a target reduction to 45,000 in 2018 that decreased with each subsequent year during his presidency.

By contrast, on Thursday, Biden painted a picture of refugees as essential to the fabric of American society and highlighted their work as nurses, doctors and other essential workers during the COVID-19 pandemic.

"We're a safer, stronger, better country because of their contributions," he said. "Together we must all work toward a more resilient, inclusive and hopeful future for our world."

"The United States has long stood as a beacon of hope for the downtrodden and the oppressed: a leader in resettling refugees in our humanitarian response," he told the virtual crowd. "I promise as president I'll reclaim that proud legacy for our country."

Jesuit Refugee Service Executive Director Joan Rosenhauer applauded the president-elect's remarks, saying in a statement that "a week after an historic US election that will impact US policy towards the world's most vulnerable, I'm thrilled that we can bring together so many remarkable people to support refugees, including President-Elect Biden."

"President-Elect Biden has promised to welcome and protect refugees, and we are honored he has made that commitment to us and to the millions of people who have been forced to flee their homes," Rosenhauer continued.

Among other notable speakers at the event were the Director of the National Institute of Allergy and Infectious Diseases, Dr. Anthony Fauci; former U.S. Secretary of State Madeleine Albright; Superior General of the Society of Jesus, Fr. Arturo Sosa; Jesuit Fr. James Martin; and husband and wife comedian and writers Jim and Jeannie Gaffigan.

Ashley Feasley, director of policy for the U.S. bishops' Migration and Refugee Services office, told NCR that she welcomed a "renewed commitment" from the executive branch of government in support of refugees.

She said that the new target of 125,000 is a "great start" but added that a lot of damage has been done to the infrastructure of the resettlement programs over the last four years, which will need to be restored. She is hopeful that the Biden administration will serve as partners in that endeavor.

Biden's address on Thursday does not mark his first collaboration with Jesuit Relief Service. In 2018, Biden wrote the forward to the book Blessed Are the Refugees: Beatitudes of Immigrant Children by Jesuit Fr. Leo J. O'Donovan, director of Mission for Jesuit Refugee Service/USA and the former president of Georgetown University, and Scott Rose and staff and volunteers of Catholic Charities' Esperanza Center in Baltimore.

Ahead of his video address to the gathering, Biden spoke with Pope Francis, who congratulated him on winning the presidency. Among the issues that the two world leaders pledged to work together on is the integration of migrants and refugees.

A version of this story appeared in the Nov 27-Dec 10, 2020 print issue under the headline: Against Catholic backdrop, Biden vows increased refugee admissions.