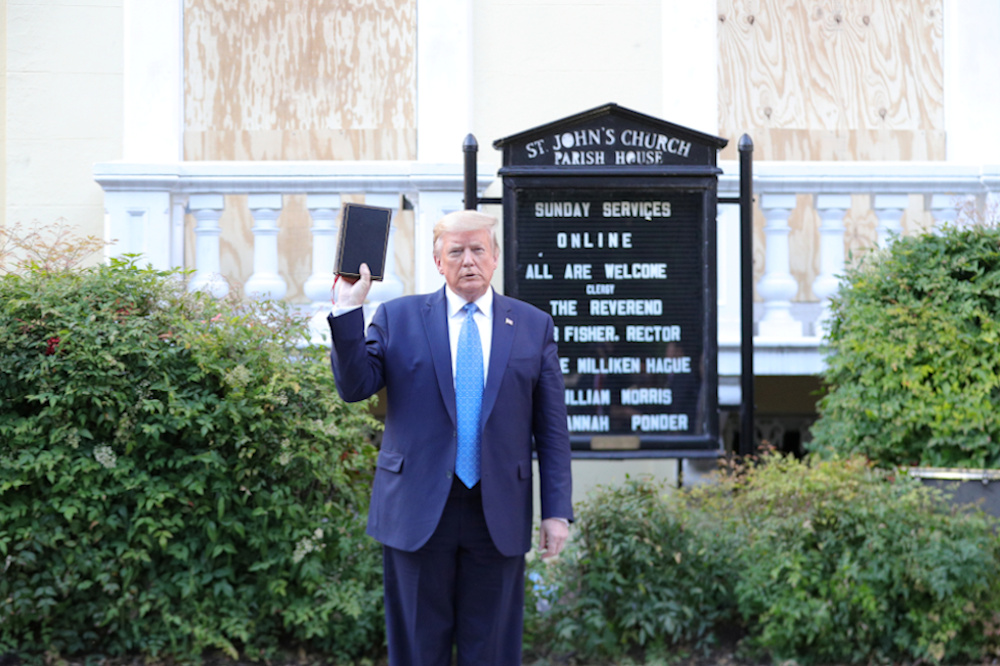 The photo opportunity had an eerie quality: Trump said relatively little, positioned stoically in front of the boarded-up church, which had been damaged the day before in a fire during protests sparked by the death of George Floyd.

The church appeared to be completely abandoned.

It was, in fact, abandoned, but not by choice: less than an hour before Trump's arrival, armored police used tear gas to clear hundreds of peaceful demonstrators from Lafayette Square park, which is across the street from the church.

Authorities also expelled at least one Episcopal priest and a seminarian from the church's patio.

"They turned holy ground into a battleground," said the Rev. Gini Gerbasi.

Gerbasi, who serves as rector at a different Saint John's Episcopal Church in Georgetown, arrived at St. John's Lafayette earlier that day with what she said were at least 20 other priests and a group of laypeople. They were organized by the Episcopal Diocese of Washington to serve as a "peaceful presence in support of protestors."

The volunteers and clergy offered water, snacks, and hand sanitizer to demonstrators who were gathered in Lafayette Park across the street — which sits directly in front of the White House — to denounce racism and police brutality following the death of George Floyd.

But sometime after six in the evening, when volunteers were packing up supplies, Gerbasi said police suddenly began to expel demonstrators from the park — before the 7 p.m. curfew announced for Washington residents earlier in the day.

"I was suddenly coughing from the tear gas," she said. "We heard those explosions and people would drop to the ground because you weren't sure what it was."

The Rev. Glenna Huber, the rector of the Church of the Epiphany who was at St. John's but left as the National Guard arrived, said she watched as police rushed into the area she had just fled. Concerned, the priest sent a frantic email to clergy at the church urging them to be careful.

Back at St. John's, Gerbasi said she was dressed in clerical garb and standing on church grounds as police approached.

"I'm there in my little pink sweater in my collar, my gray hair up in a ponytail, my reading glasses on, and my seminarian who was with me — she got tear gas in her eyes," she said.

Gerbasi said as she and the seminarian watched, police began to expel people from the church patio.

"The police in their riot gear with their black shields and the whole bit start pushing on to the patio of St. John's Lafayette Square," she said, adding that people around her began crying out in pain, claiming to be shot with non-lethal projectiles.

Gerbasi and others eventually fled the scene, leaving emergency medical supplies behind. By the time she reached K street several blocks away and checked her phone, Trump was already in front of the church holding a Bible.

"That's what it was for: to clear that patio so that man could stand in front of that building with a Bible," said Gerbasi.

The White House did not immediately respond to a request for comment.

Trump aides reportedly told a Bloomberg News reporter that officials had planned to expand the perimeter around White House Monday afternoon, irrespective of Trump's visit to the church — although those plans do not appear to have been shared with clergy working in front of the church.

The official White House Twitter account did tweet a video Monday evening celebrating Trump's visit to the church, complete with footage of Trump walking to the church set to dramatic music.

Episcopal Church leaders were quick to condemn the incident.

The Rev. Mariann Budde, the bishop of Washington who helped organize the clergy presence at the church, said Trump's arrival at St. John's happened without warning and left her "outraged."

"The symbolism of him holding a Bible … as a prop and standing in front of our church as a backdrop when everything that he has said is antithetical to the teachings of our traditions and what we stand for as a church — I was horrified," she told RNS.

The Rev. Michael Curry, presiding bishop of the Episcopal Church, also criticized the move, accusing the president of using "a church building and the Holy Bible for partisan political purposes."

"This was done in a time of deep hurt and pain in our country, and his action did nothing to help us or to heal us," Curry said in a statement.

"We need our president, and all who hold office, to be moral leaders who help us to be a people and nation living these values. For the sake of George Floyd, for all who have wrongly suffered, and for the sake of us all, we need leaders to help us to be "one nation, under God, with liberty and justice for all." 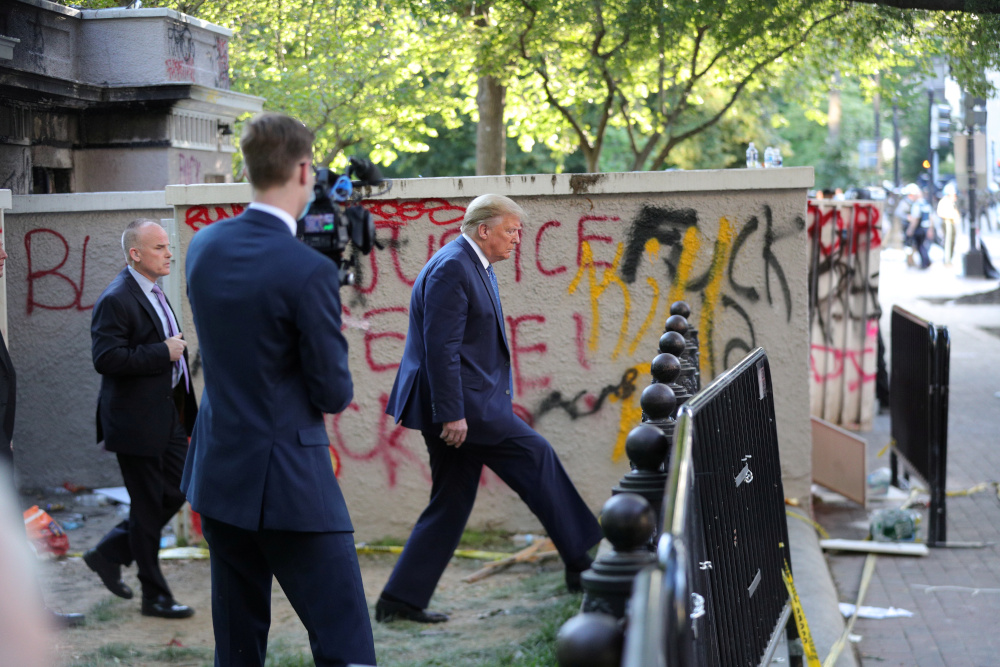 St. John's has long been tied to the presidency. Founded in 1816, every sitting president since has attended the church at least once, earning it the nickname "Church of the Presidents." The church's then-rector, the Rev. Luis Leon, prayed at President Barack Obama's second inauguration, and the church hosted a service on the morning of Trump's inauguration as well.

The church, like many Episcopal congregations, is known for harboring a liberal bent: it has hired LGBTQ clergy and advocated for same-sex marriage. Its parent denomination, the Episcopal Church, has also been critical of Trump: Curry participated in a 2018 protest near the White House in which he and other liberal-leaning clergy blasted Trump's campaign slogan "America First" as "a theological heresy."

St. John's was also damaged during the demonstrations over the weekend when it was defaced with graffiti and suffered a small fire in its basement that was quickly extinguished.

Asked what she would tell Trump if given the chance, Gerbasi said: "You want to be living your life by the words in that book (the Bible), not toting it around as a photo opportunity."

The priest later posted about her experience on Facebook, concluding her account with the defiant decree "I am now a force to be reckoned with."