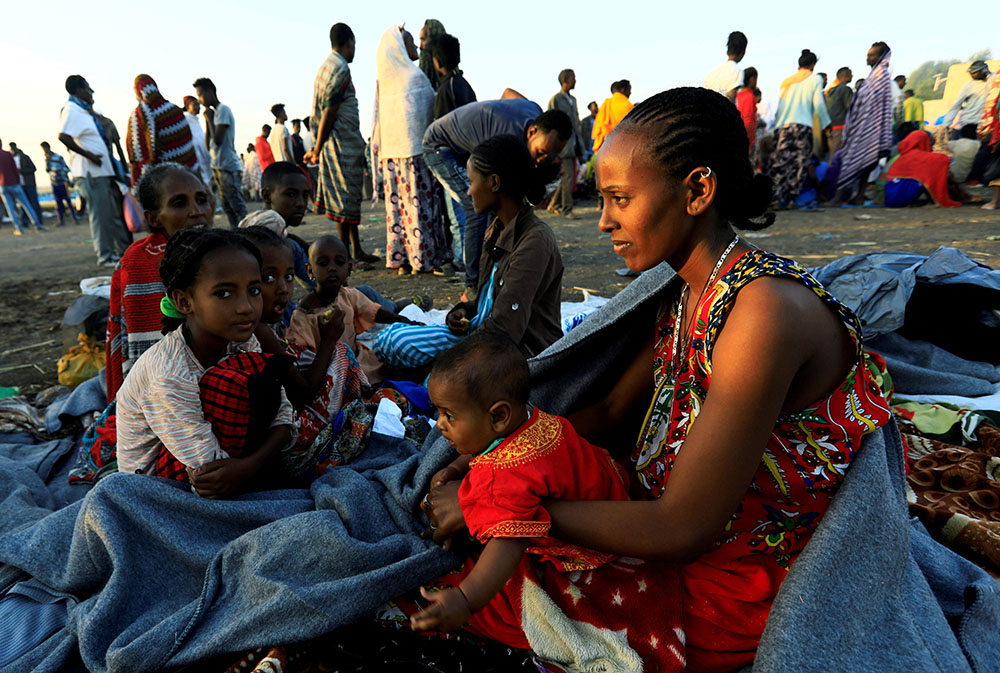 Ethiopian women who fled the ongoing fighting in the Tigray region of Ethiopia are seen in Sudan Nov. 22, 2020. (CNS/Reuters/Mohamed Nureldin Abdallah)

With communication and access to Ethiopia's crisis-ravaged Tigray region cut off, Catholic relief and other humanitarian agencies are having difficulty responding to those in need there and in refugee camps in neighboring Sudan — among them pregnant women, vulnerable groups and newly born babies.

Thousands of Ethiopians have fled Tigray, Ethiopia's northernmost region on the border with Eritrea, as national government forces have sought to reassert federal control over the area. Many are arriving in western neighbor Sudan without even the most basic necessities, say aid agency officials.

The bigger impact has been on fleeing women, who also face heightened risk of sexual violence and abuse as they journey. It has been worse for those pregnant or those who have just given birth.

The United Nations Population Fund estimated in late November that more than 700 of some 7,500 women refugees arriving in Sudan from Tigray were pregnant.

Other women and girls have just survived gender-based violence and are in need of specialist health care, which is in short supply. As the numbers tick up, so does the desperation and vulnerability of even more Ethiopian women from Tigray.

A 52-year-old Ethiopian refugee who recently arrived at a Sudan refugee camp after fleeing Tigray said there has not been sufficient aid from responders and humanitarian agencies to assist everyone in need. As a result of the shortages of relief material, only the fittest are able to rush to collect food when aid parcels are delivered.

Speaking through a humanitarian worker with the nongovernmental organization CARE International, the woman, from the city of Humera, said: "Nursing mothers and children are not getting help because the youth push them out of the way during distributions."

Pope Francis has joined those calling for peace to prevail in Tigray and for the conflict to come to an end. In a Nov. 27 appeal, he noted that hundreds of civilians have died and tens of thousands have been forced to flee. 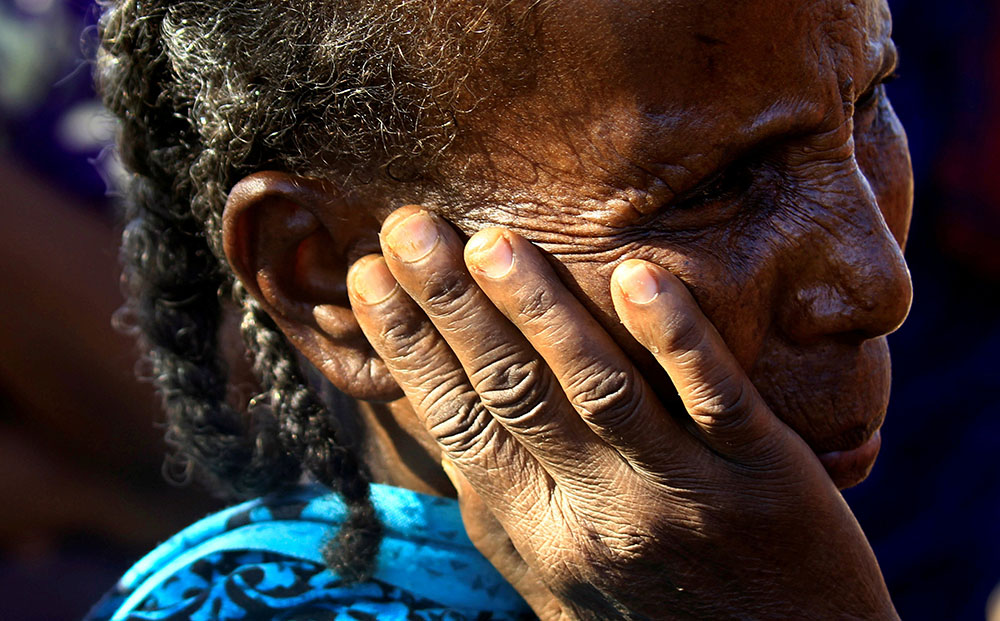 An Ethiopian woman who fled fighting in the Tigray region is seen at the Um-Rakoba refugee camp on the Sudan-Ethiopia border Dec. 13, 2020. (CNS/Reuters/Mohamed Nureldin Abdallah)

Tigray's government is run by the Tigray People's Liberation Front (TPLF), which has come into tension with Ethiopian Prime Minister Abiy Ahmed's government over the past year because of a scheme to reorganize the country's political parties.

The TPLF has also claimed that Ahmed's plan to postpone all elections in the country until 2021 because of the pandemic is illegitimate, and pushed ahead with its own regional elections last September.

The conflict escalated into violence Nov. 4, when the TPLF bombed the northern command office of the Ethiopian National Defense Force. National forces then launched military assaults on the TPLF in response, before claiming to have regained control of the Tigrayan capital, Mekelle, Nov. 28.

While more than 50,000 people have been displaced from Tigray, thousands of others have remained trapped inside the region. They face hunger and disease and are shut out from the rest of the world, as the federal government has shut down all communications infrastructure and closed the regional borders.

Aid and much-needed health services are beyond their reach. And fleeing into Sudan is increasingly being seen as a better option, despite the risks and dangers that lurk at every turn of that journey.

A 34-year-old refugee from Tigray who had just arrived in Sudan said pregnant women were among those pushing and shoving to access assistance from aid agencies.

"There are elderly people, mothers and pregnant women who came here to receive items. But there is no proper line and people are just pushing for themselves," said the refugee, who asked not to be named.

André Atsu, director for Jesuit Refugee Service in East Africa, told NCR that his organization has been unable to even assess the needs of those still within Tigray.

"Currently, access to refugee camps is limited in the Tigray region," said Atsu. "Hence, it is difficult to provide information on how are we responding to the humanitarian crisis. ... Once we are provided access, then we will be able to continue our assistance."

International humanitarian organizations such as Human Rights Watch fear that there are unreported abuses taking place within Tigray. The U.N. High Commissioner for Refugees has already made an appeal for $147 million to support as many as 100,000 Ethiopians who are expected to flee into Sudan.

Catholic Relief Services is trying to get close to the crisis areas of Tigray, but not inside. The agency has been operating humanitarian response programs from the border.

Together with its local church partner, Bahir Dar Catholic Secretariat, CRS is providing food rations for up to two months to the displaced people in the Ethiopian regions of Northern Amhara and Western Tigray. But it is not enough.

He added: "The conflict has created more pressure and stress on women and girls, as they are typically responsible for taking care of the children, elderly, and looking for water for the family."

Shumlansky said CRS and local church partners stand ready to move more supplies to those impacted within the region "when access is secured."

There are fears though, that the impact of the conflict on the humanitarian situation will be prolonged and that it could lead to further food insecurity and health issues beyond the crisis. Humanitarian efforts in Ethiopia have already been stretched because of the coronavirus pandemic.

"The conflict will have a long-term impact on the humanitarian situation in the region as agricultural and economic activities are interrupted, and people will depend on humanitarian assistance for survival and for their livelihoods in the coming months," said Shumlansky.

Although Ahmed now says the military action has ended, Catholic agency officials stressed to NCR that access into the region is still impossible because of continued standoffs between national and regional forces.

"The main hospital in #Mekelle #Tigray is paralyzed," Robert Mardini, director general of the International Committee of the Red Cross, tweeted Dec. 9. "No supplies, no fuel, no running water. Doctors & nurses have suspended intensive care services and are struggling to do routine care like delivering babies or providing dialysis treatment."

Ethiopia's Catholic bishops have called for an immediate cessation of the conflict, saying in a Nov. 9 statement that the two sides should "start peaceful dialogue for the benefit of the people and resolve their differences in the spirit of understanding, mutual respect and trust."

[Tawanda Karombo is a business and financial technology journalist based in Harare, Zimbabwe, with more than 10 years' experience covering sub-Saharan Africa.]

A version of this story appeared in the Jan 8-21, 2021 print issue under the headline: Aid cut off from war-torn Ethiopian region.