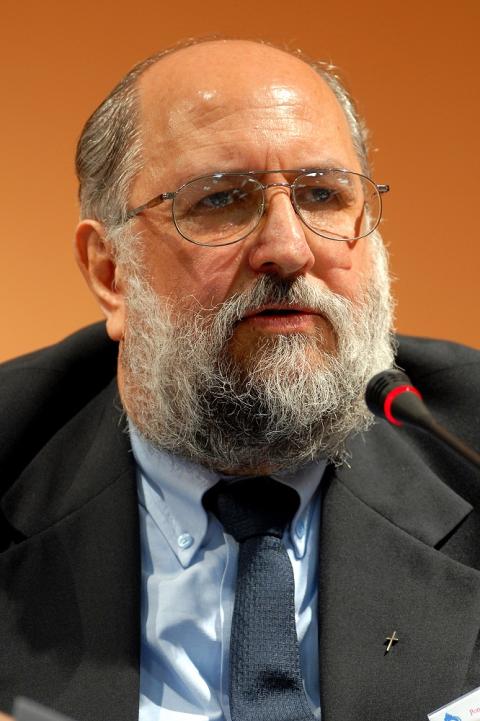 Luis Fernando Figari, founder of Sodalitium Christianae Vitae, is pictured in a 2006 photo. The Peruvian-based Catholic movement has acknowledged that Figari committed sexual, physical and psychological abuse of teens and young adults in the group, including minors. (CNS/Daniele Colarieti, EPA)

Saying Pope Francis is following the situation with concern, the Vatican named a Colombian bishop to be the trustee of the scandal-plagued Sodalitium Christianae Vitae, a Catholic movement based in Peru.

The Congregation for Institutes of Consecrated Life and Societies of Apostolic Life appointed Bishop Noel Londono Buitrago of Jerico, Colombia, trustee of the group, the Vatican press office announced Jan. 10.

Pope Francis, the statement said, "has followed with concern all the information that for years has arrived at the congregation" about the movement founded by Luis Fernando Figari. In 2017, Sodalitium leaders released a report acknowledging that Figari sexually, physically and psychologically abused minors, teen and young adult members of the movement.

Pope Francis "insistently requested" the congregation to act, the statement said, adding that he had been "particularly attentive to the gravity of the information regarding the (movement's) internal regime, the formation" process members went through and the financial operations of the group.

Those concerns, along with a Peruvian court's request that Figari be jailed pending a criminal investigation into allegations of sexual and psychological abuse, led to the congregation's decision to name a trustee to assume control of the movement, the statement said. Figari apparently is living in Rome; in the first weeks of 2017, the Vatican informed Sodalitium leaders that Figari had been ordered to remain in Rome and not have any contact with the organization or give interviews to the media.

The Code of Canon Law says a trustee is named "in special circumstances and where grave reasons require it."

In the Jan. 10 announcement, the Vatican also said Cardinal Joseph Tobin of Newark, New Jersey, will continue to be the Vatican's delegate in its relationship with the Sodalitium, particularly regarding economic questions. The cardinal was named delegate in 2016 after a report drafted by an internal Sodalitium ethics commission painted Figaro as an abusive dictator who controlled and manipulated teens and young adults, enjoying a life of "personal privilege" while forcing rigorous austerity on others.

The ethics committee called for the "public repudiation" of Figari's behavior and immediate assistance to abuse victims. It also urged the Vatican to sanction Figari and place Sodalitium under the leadership of "people from outside its current organizational structure.

On the Sodalitium website, under "founder," the following is written: "Due to the recent news about the accusations against our founder, we have removed the information from this section."