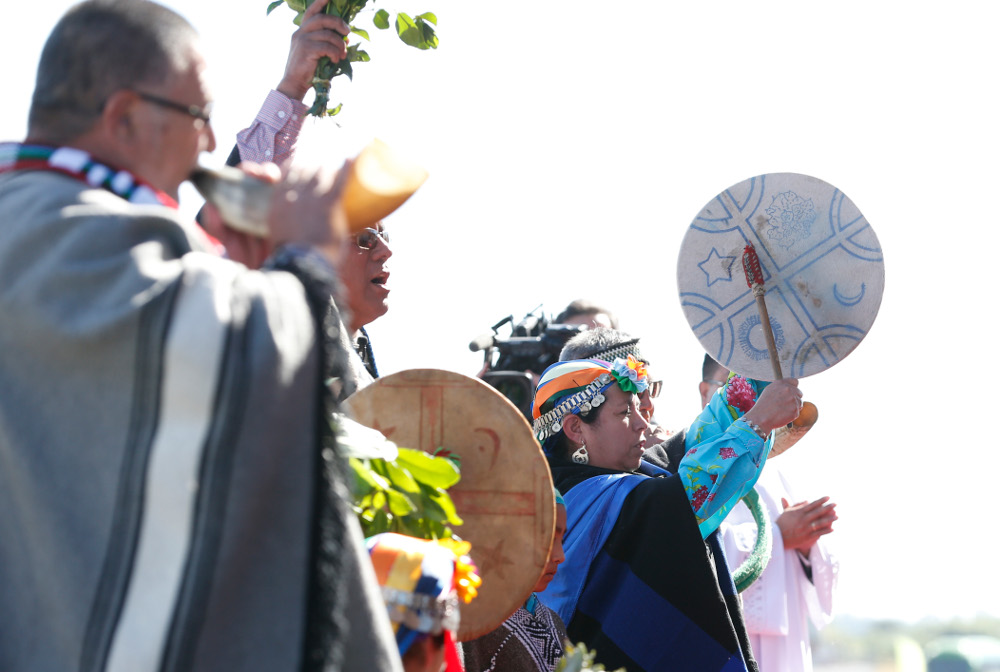 Indigenous people perform music for Pope Francis at the beginning of Mass at the Maquehue Airport near Temuco, Chile, Jan. 17. (CNS/Paul Haring)

Pope Francis told Chile's indigenous people Jan. 17 to shun bloodshed in their decades-long struggle with the country's government over control of their native lands, warning that violence "eventually turns even the most just cause into a lie."

Speaking in the capital of Chile's verdant southern Araucanía region — where protest against the government's sale of former indigenous territory to logging companies has included shootings, kidnappings, and bombings — the pope said: "You cannot assert yourself by destroying others."

"Violence begets violence, destruction increases fragmentation and separation," Francis said in a homily during a Mass with 150,000 Mapuche, Rapanui, Aymara, Quechua, Atacameño, and other indigenous people gathered at Maqueue airfield.

Violence, the pope said, is "like the lava of a volcano that wipes out and burns everything in its path, leaving in its wake only barrenness and desolation." He encouraged the native peoples to instead "seek the path of active nonviolence."

Francis' exhortation against political violence came on the second of his three-day visit to Chile. A tense atmosphere not before seen on the pope’s 21 other voyages abroad has marked the trip.

At least six churches across Araucanía have been firebombed in the past 48 hours, apparently by militant indigenous groups who think the pope's visit lends legitimacy to the Chilean government's control of their native lands. Three helicopters owned by the logging company Forestal Arauco were also attacked overnight Jan. 16, their cockpits left bombed-out and unusable.

Francis is also facing vocal criticism over his 2015 appointment of Bishop Juan Barros Madrid of Osorno, Chile, who is accused of covering-up for notorious abuser Fr. Fernando Karadima in the 1980s and ‘90s.

Read this next: Francis tells Chile's clergy to seek pardon for abuse and betrayed trust

Several protesters stood outside the airfield in Temuco Jan. 17 to criticize the pope over Barros. Referencing the pope's defense of Barros in 2015, when the he said the allegations against the bishop were being orchestrated by "lefties," the protestors held a sign that read: "Not lefties, nor fools, Osorno suffers. Bishop Barros covered up."

Francis arrived in Temuco after an hour-long, 400-mile flight south from Santiago, the Chilean capital, where he is staying each night in the country.

The Mass in Temuco began with a short ritual performed by a small group of indigenous people, who approached the wood-accented altar platform at the airfield wearing colorful headdresses and holding tree-branches. As several of the indigenous banged on drums, the rest of the group moved the branches while singing softly.

Francis started his homily by referencing how the airfield hosting the Mass had been used at the beginning of Augusto Pinochet's 1973-90 military dictatorship as a detention and torture center of political dissidents.

The pope said the site had been the location of "grave violations of human rights" and said he wanted to offer the Mass for all those who had died and those who experienced "so much suffering, so much pain."

Francis also focused his reflection on the need for different cultures within a society to seek unity together while distinguishing between unity and uniformity.

The pope said that unity should not come about as "the result of forced integration" but must be woven together like a hand-stitched garment. "Unity can never be a stifling uniformity imposed by the powerful, or a segregation that does not value the goodness of others," he said.

Logging is Chile's second-largest industry, after copper mining, and is responsible for 10 percent of the country's exports. Nearly 20 percent of land in Araucanía is now used for forest plantations, which activists say has adversely affected the local ecosystem.

There are about 600,000 Mapuche in Chile, which has a total population of some 17.9 million. The indigenous people have lived in the region since long before the Spanish arrived in the area in the 16th century.

The Chilean government and the Mapuche have been at odds for nearly three decades over what lands in the region should be controlled by the indigenous group, and the disagreement has as times turned violent, often with the setting of destructive fires that cost logging companies tens of millions in damages. 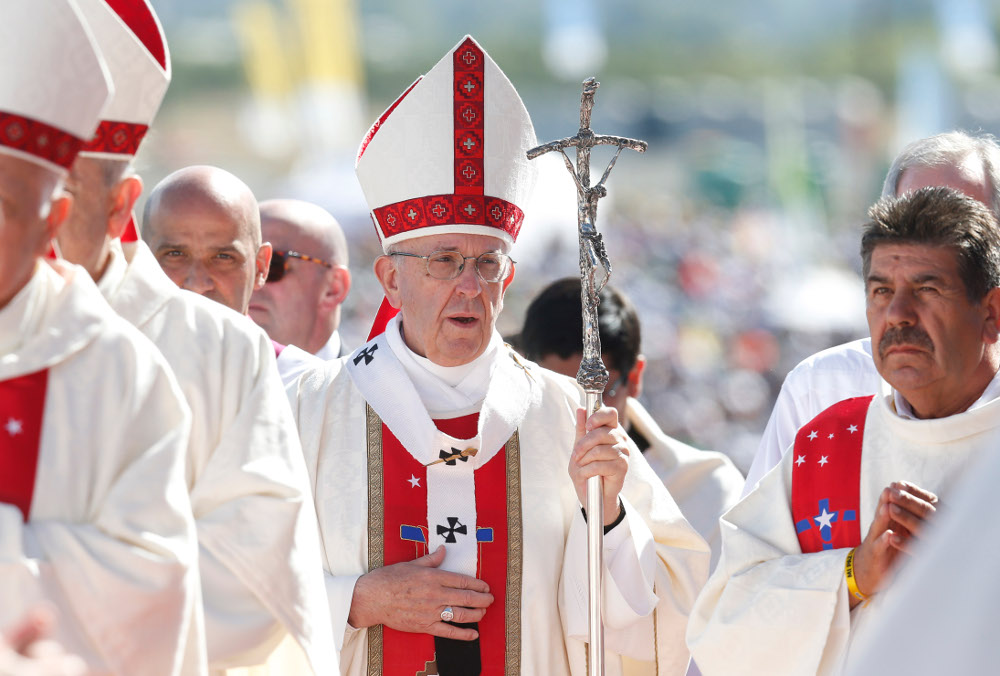 After the Mass Jan. 17, Francis is to have a private lunch with 11 representatives of the Araucanía region, including eight Mapuche, a victim of rural violence, a Haitian immigrant, and a Swiss-German settler,* at an educational center run by the Congregation of the Holy Cross. The pope will then return to Santiago, where he is to hold a meeting with young people and visit the Pontifical Catholic University of Chile in the evening.

The pope's visit to Chile will continue Jan. 18 with a trip to Iquique, a port city about 1,000 miles north of Santiago, where he will celebrate an open-air Mass before heading on later in the day to Lima, Peru.

*The number of representatives has been updated from an earlier version.